Trump hates Muslims, and clearly trades on it - Arch conservatives offer nothing but guff 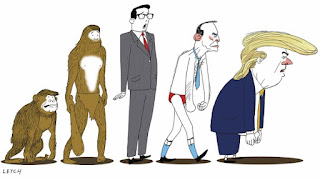 If the problem is an un-Reformed Islam then it follows that un-Reformed Muslims are intrinsically a danger. And if that Reformation has never existed, then it follows that all Muslims (or religious ones, anyway) are un-Reformed. Follow the syllogism and you'll get to Trump eventually. And that's where the brand of politics comes into focus. Trump hates Muslims, and clearly trades on it.


Sorry, but I just can't quite get over the irony. Unless I have this completely mistaken, Tony Abbott just called for both a Reformation and a revolution "within Islam". This is, of course, perhaps the most well-worn and ill-informed cliche of Western discourse on Islam – the kind of thing people like to say when they want to sound serious but know almost exactly nothing about Islam, Muslim societies, or indeed the Reformation.


But it takes on a special instructive quality coming from Abbott: a self-described conservative Catholic. If that description has an antonym, it's something like a revolutionary Protestant: pro-Reformation, pro-revolution. And yet here is our former prime minister, arguing against his very self. 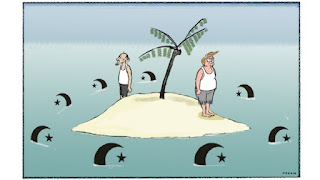 Unless, of course, he isn't because when it comes to Islam, all the normal rules are suspended. Including, it seems, whatever rules require that the words we use are meant to have meaning. So much could be said here. Of how Islam's own version of the Reformation already occurred in the 18th century. Of how this episode gave birth to Wahhabism, with its disdain for traditional religion and its austere scripturalism. Of how that finally became expressed in the nation state of Saudi Arabia. Of how it combined with the anti-colonial movement of Islamism – self-consciously a reform movement, by the way – to create (eventually) al-Qaeda and through it Islamic State.


And of how we should hardly be surprised that Islam's Reformation has turned so bloody and so ugly given that Christianity's Reformation claimed somewhere between 5 million and 15 million lives in the French Wars of Religion and the Thirty Years' War alone.


What Abbott (and new MP Andrew Hastie, and Energy and Resources Minister Josh Frydenberg – hell, you can add names of your own to the list) simply fail to understand is that the Reformation is here. They're looking at it. The Muslim world – and indeed Islamic thought – is in crisis. It has been probably since the late Ottoman era, and it was compounded by the utter destruction of its main institutions of religious learning in the colonial era. But its affliction has nothing to do with needing a Reformation. It's about a people now thoroughly disconnected from their own tradition. The Muslim world's affliction is amnesia.


I could go on like this (and I have), but the truth is there's no point. Because this isn't really a conversation about Islam. It's too transparently political – and theologically illiterate – for that. The more interesting story here is one of a collapsing brand of politics; a politics compulsively lashing out as it becomes ever more marginal. Indeed a politics that seems to be taking pride in that marginality. Hereabouts, I give you Donald Trump.


"We need a total and complete shutdown of Muslims entering the United States while we figure out what the hell is going on," Trump boomed this week. It's a fascinating intervention because it's so completely unvarnished, but it's also the logical extension of all this Reformation guff.


If the problem is an un-Reformed Islam then it follows that un-Reformed Muslims are intrinsically a danger. And if that Reformation has never existed, then it follows that all Muslims (or religious ones, anyway) are un-Reformed. Follow the syllogism and you'll get to Trump eventually. And that's where the brand of politics comes into focus. Trump hates Muslims, and clearly trades on it.


But he apparently also hates Mexicans and women. Moreover, he hates them all in the most scandalous way, and I suspect that's the point. Trump is interesting precisely because his politics is all about scandal. He's transforming rank prejudice into virtue. Any scandal only proves his bona fides. So every criticism becomes just another case of political correctness to which he can respond, as he did this week: "But. I. Don't. Care."


It's the not caring that is thrilling. Just as for Abbott, it's the "straight talking" that is the brand: "We can't remain in denial" he writes because it allows him to cast himself as clear-eyed and brave rather than historically loose and analytically incoherent. This is the politics of hairy chests; the politics that self-consciously gives the finger to the niceties of postmodern society. And especially, the politics that holds the full range of shadowy threats at bay – from Muslims to the PC brigade. Islam is just another symbol in this world; just another enemy of the imperilled order. It signifies the West's cultural decline: its capitulation to the cult of diversity and minority rights.


The politics that (inaccurately) describes itself as conservative has now been reduced to such obsessions. It pretends to preserve and defend a culture, but notice how it never really enacts it. There is always much talk of values such as "decency and tolerance", but it's a real struggle to recall exactly how that was practised at crucial moments or under any stress. On climate change, or asylum seekers, or budget reform or international relations, the message was always one of aggression.


The Abbott government – and now what we might call the Abbott opposition – was forever hunting enemies. At most it packaged aggression as compassion, but it was always aggression. That is the only mode it has. It has no traditional moral language; nothing that richly evokes concepts like empathy, courage, sacrifice, restraint, forgiveness, forbearance, humility.


The real giveaway in this brand of politics is not that it speaks forthrightly about Islam. It's that it seems to be able to do nothing else (or maybe little else once you add the formulaic hectoring of climate change). It's the kind of discourse that has nothing much to say even about Christmas unless it can become a story of how political correctness (or Muslims, or both) are destroying it.


I don't doubt this serves a purpose. I don't doubt Trump appeals to a sector of society that feels utterly excluded by the hyper-diversity of our age. I understand – and am even sympathetic to – the now hopeless desire for some kind of cultural consensus that can bind a society.


But it is telling that self-described conservative politics cannot offer even that any more; that it can only offer a parade of enemies by way of substitute; that it simply cannot tap into a positive register. It's as though it has forgotten itself. As though it has suffered through its own unfortunate Reformation.


Waleed Aly is a Fairfax Media columnist and a lecturer in politics at Monash University. Illustration: Simon Letch and Andrew Dyson
Posted by Kerry B. Collison at 1:17 PM