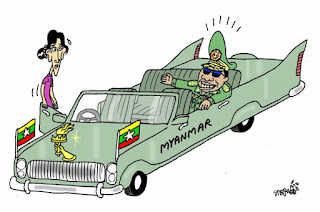 After a successful election early last month, which handed down a landslide victory to Daw Aung San Suu Kyi's National League of Democracy, there is a growing sense of anxiety within Asean about what kind of a new Myanmar is emerging.


Asean leaders understand too well the grouping's most famous nemesis, Suu Kyi, is going to shape her country's future with Asean in the next five years. The challenge is how Asean can interpret her complicit silence in this pivotal relationship in ways that would not undermine the full integration of the Asean Community, which begins on December 31.

After its admission to Asean in 1997, Myanmar has been suffering from all kinds of prejudices and heavily ostracised by its members and dialogue partners due to human rights violations and political oppression within the country. When it was time for Nay Pyi Taw to chair Asean in 2005, the besieged nation opted out for good, citing unpreparedness and domestic turmoil as key reasons.

For the next 10 years, the ruling military regime under the strongman, General Than Shwe, pursued unwaveringly the seven-point peace plan, which began in 2003 and ended with the recent election - but with extremely high casualties.

The military crushed the Silk Revolution harshly in 2007, which drew heavy condemnation from Asean and the international community at large. Even amid the human tragedy after Cyclone Nargis hit the Irrawaddy Delta in May 2008, the regime went ahead with the planned referendum on a constitution six months later.


Again, despite the display of leniency and understanding over dissension since the 2011 reforms, the Thein Sein government responded heavy-handedly against student demonstrations over education reform, fearing they would derail the scheduled election. The recent widespread floods in most western and northern parts of the country caused rumours of a postponement of polling day.

As it turned out, the vote outcome shocked the power wielders - they were victims of their own schemes. The people of Myanmar wanted change, and they wanted Suu Kyi to make the changes for them.

Following that poll, Myanmar has now risen like a phoenix and gradually occupied the discourse concerning the latest developments and its democratic impact on the rest of Asean.

Indonesia's dramatic political change in 1998 accelerated the grouping's economic and political integration, turning the most reluctant member - the grouping's lowest denominator - into an enthusiastic cheerleader in promoting Asean's profile among the global community. However, under the current President Joko Widodo, Indonesia has focused more on domestic issues and development trends.

As a new game changer, Myanmar's epoch-making turnaround, along with its geostrategic location, will create broad ripple effects on Asean and beyond. For instance, in the new action plans outlined in the Asean Community Vision in 2025, Myanmar has already been at the forefront in implementing measures to create rule-based, democratic and good governance.

Notably, among all the Asean members, Myanmar has become one of the most dynamic and active users of social media - even though mobile technology was only recently introduced and popularised. By the end of next year, it is estimated that nearly 75 per cent of its 51 million population will have access to online platforms.

With the NLD's reign in Myanmar, there are two possibilities regarding relations with Asean. First, the new government could pursue the Thein Sein government's ongoing policy, which has already integrated Myanmar into the overall scheme of integration with Asean. The country has done well in its economic programme despite ineffective implementation of key measures on non-tariff measures, particularly those requiring intra-agency cooperation such as a single window, harmonisation, and small- and medium-size enterprises - a common symptom among Asean members.

Under the new government, action plans on political security as well as social-cultural pillars would be further accelerated, especially in the areas of social development, human rights and civil society organisations.

The second alternative is to focus on domestic priorities, akin to Indonesian President Joko Widodo, after he took power over a year ago. Unlike Widodo, Suu Kyi has no long-standing acrimonious relations with Asean and its leaders. With her international status as a Nobel Peace laureate and democratic icon, she does not need Asean to prop her up in Myanmar.

Under the current circumstances, Asean needs her more than she needs Asean to promote the grouping's democratic and human-rights profile. Ironically, if she decides that Myanmar should chill towards Asean, it would be a relief for the rest of Asean leaders who are anxiously watching the leap-frog political transformation and assessing its contagious effects.

The first indicator will be visible during the first week of February, when she expects to name the new president for the parliamentarians' approval. Nearly five years ago, General Thein Sein was elected president on February 5, 2011. At the moment, he is scheduled to join the Asean leaders who have confirmed their attendance for the special Asean-US Summit in mid-February 2016 at the Annenberg Retreat at Sunnylands in California. However, if a new president can be named in time, he or she would replace Thein Sein as Myanmar's head of delegation. US President Barrack Obama invited the leaders to the US for a special meeting when they met last month in Kuala Lumpur.

Suu Kyi's relations with Asean have a long history, mostly unreported. On July 28, 1995, when she was scheduled to meet the Yangon-based Asean diplomats to exchange views following her release on July 10, the meeting was called off at the last minute at the request of the Ministry of Foreign Affairs, as Myanmar was acceding to the Treaty of Amity and Cooperation at the Asean meeting in Brunei. Since then, her ties with Asean have been frozen because she thought Asean did not stand up for her. Other non-Asean diplomats have needed to constantly meet her and encourage her to engage with Myanmar.

Her personal distrust of Asean, as a collective group of non-democratic leaders in Southeast Asia, really runs high. Throughout her years of incarceration, Asean was extremely cautious not to upset the military regime, trying to balance its diplomatic efforts to persuade Myanmar to continue reform and to free her. There were times when Asean got tough with Nay Pyi Taw, but not tough enough. Asean criticised the military regime when Suu Kyi was attacked by the government-sponsored mob at Depayin in 2003. At the end of September 2007, Asean upped its ante with the strongest condemnation ever over the armed suppression of monks and civilian demonstrators.

It remains to be seen how Asean-Myanmar relations will evolve in the coming months and years. Although Suu Kyi won the election with the slogan of "Time to Change", so far she has yet to show any sign that she has come to terms with Asean - as she did successfully with the military regime.


Kavi Chongkittavorn
The Nation
Posted by Kerry B. Collison at 12:50 PM