Police Out in Force to Guard Indonesia's 33,809 Churches Over Holidays 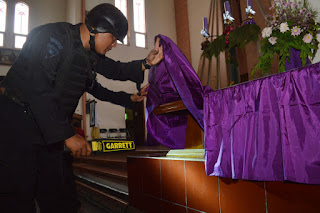 A police officer performing security checks at a church in Madiun, East Java, on Friday. (Antara Photo/Siswow
Jakarta. Indonesia's National Police will go all-out this year in their effort to protect Christian houses of worship amid a heightened terror threat.


Operation Candle will run from Dec. 24 until Jan. 2 this year and will involve more than 150,000 security personnel. From the National Police there will be 80,197 personnel, backed up by 70,351 people from the TNI [Indonesian Military].


There's a total number of 33,809 churches. But apart from houses of worship we will also pay attention to other locations, such as tourism spots and entertainment venues.


Police have also installed almost 1,000 camera's at key locations and more than 1,550 security posts will be set up across the country, alongside 638 service posts.


Security would also be tightened at ports, airports and bus and train stations.


Officials have indicated in recent months that the threat of a terror attack by supporters of radical groups like the Islamic State movement also exists in Indonesia, the world's largest Muslim-majority country. Experts also say, however, that large-scale attacks are unlikely here. Jakarta Globe