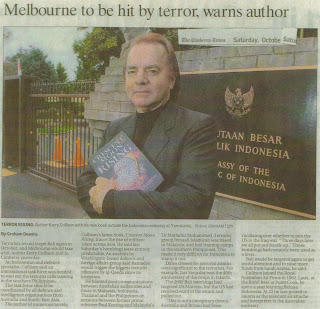 Credentials Challenged, Radical Quotes West Point
BEIRUT, Lebanon — He has been mentor to some of the most brutal
terrorists on earth. But Abu Muhammad al-Maqdisi, a prominent
cleric and theorist of jihad living in Jordan, has grown tired
of hearing younger extremists accuse him of going soft.
So in a recent Internet post to his followers, Mr. Maqdisi
defended his hard-line credentials by invoking a higher
authority: the Combating Terrorism Center at West Point.
“Credit is due to the testimony of enemies,” Mr. Maqdisi wrote,
as he directed his readers to a recent journal article by Joas
Wagemakers, a Dutch scholar of jihadism, and the “Militant
Ideology Atlas,” both published by the center. Both identified
Mr. Maqdisi as a dangerous and influential jihadi theorist, he
noted.
So did two articles by liberal Arab columnists, Mr. Maqdisi
added proudly, including one that referred to him as a “sheik of
violence” and “the head of the snake.”
It is not new for Islamic extremists to cite Western
counterterrorism reports. Ayman Zawahri, the deputy of Osama bin
Laden, has referred at least twice in his taped statements to
“Stealing Al Qaeda’s Playbook,” a 2004 article also published by
the center. But recently Mr. Maqdisi has taken this
hall-of-mirrors phenomenon to a new level, complaining bitterly
that secular Western analysts generally understand him better
than many in his own community.
“I am surprised at the low level of their thinking,” Mr. Maqdisi
wrote of his critics, “and how the enemies of religion read and
understand us better than they do.”
The complaint is a testament to the growing community of Western
jihad watchers, an obsessive and multilingual crew who monitor
and debate terrorist Web statements like Talmudic scholars
poring over a manuscript.
It also illustrates the fragmentation of authority within the
global jihadist movement, where even prominent figures like Mr.
Maqdisi are vulnerable to younger critics who feel free to
interpret the call to jihad, and the Koran generally, as they
see fit.
For the Western analysts, being cited approvingly by a Qaeda
figure can be unsettling.
“It is inevitably a little bit flattering,” said Thomas
Hegghammer, a fellow at Harvard’s John F. Kennedy School of
Government, who first pointed out Mr. Maqdisi’s complaint on the
blog he edits, Jihadica. “But it does make me worry a bit about
the implications of what I do and what I write.”
The home page of the Jihadica site, founded a year ago by the
scholar William F. McCants, advertises itself with an anonymous
quotation said to be taken from a survey of jihadists about
Internet sites that monitor militant Islamism online: “It is, in
my view, the most important and dangerous among the sites in
this group.”
All this self-consciousness is multiplied by the Internet, which
has become a recruiting tool for jihadists but is also uniquely
vulnerable to spies and informers. The fact that Western
scholars and defense analysts have occasionally proposed using
influential theorists like Mr. Maqdisi to undermine jihadist
movements only makes this worse.
For all their suspicion toward each other, many militant
Islamists often speak of Western analysts — especially those
with a clear link to the military — with the respect due a true
enemy. Mr. Maqdisi, whose Web site includes the world’s largest
online compilation of jihadist literature (it is searchable by
author), is clearly aware of what is written about him, and
about jihad generally.
Despite his stature, he has been fighting off criticism from
jihadists for years. Born in what is now the West Bank, Mr.
Maqdisi spent time in Pakistan and Afghanistan in the 1980s,
where his writings and speeches legitimizing violence influenced
Osama bin Laden and others. In the mid-1990s he was sent to
prison in Jordan and became the spiritual mentor of a fellow
prisoner, Abu Musab al-Zarqawi, who later became notorious for
decapitating hostages as the leader of Al Qaeda in Mesopotamia.
In 2005 Mr. Maqdisi was briefly released from prison and
criticized Mr. Zarqawi’s bloody car-bombing campaign against the
Shiites of Iraq. That led some to accuse him of becoming a tool
for the Jordanian or American authorities, an accusation that
has been renewed in recent months.
Mr. Maqdisi, who is now under house arrest in Jordan, has
angrily turned that accusation against his critics, arguing that
their efforts to undermine him and other jihadist leaders derive
from a strategy outlined by Western analysts working for “the
Crusader RAND Corporation.”
In fact, at least a few Islamists seem to see the hand of the
RAND Corporation, an American policy organization that produces
reports on terrorism and other subjects, in many plots. This
year a hard-line Saudi cleric told this reporter during an
interview that “RAND-ites” were seeking to de-Islamize Saudi
Arabia.
Mr. Maqdisi’s problem is more homegrown. A new generation of
jihadists, many of them less educated and respectful of
authority than their elders, has begun taking issue with him.
Mr. Maqdisi believes suicide bombing is a legitimate tactic but
has said it should not be used indiscriminately, and he has
spoken against the sectarian massacres in Iraq. For this he is
accused of turning his back on jihad.
In a sense, Mr. Maqdisi can hardly complain, because he did the
same thing to his clerical elders when he was young.
“For several decades, there has been a dynamic at work in the
radical Sunni Islamist community where each new generation
becomes less principled, less learned, more radical, and more
violent than the one before it,” said Bernard Haykel, a
professor of Middle East studies at Princeton.
In fact, recently some Western counterterrorism experts have
seized on this trend and hailed it as proof that Al Qaeda and
its affiliates are doomed to destroy themselves in an orgy of
violence and in-fighting. Whether Mr. Maqdisi will also cite
those Western theories in defense of his own approach remains
to be seen.
The New York Times
By ROBERT F. WORTH Thursday, April 30, 2009
Posted by Kerry B. Collison at 2:58 PM

Email ThisBlogThis!Share to TwitterShare to FacebookShare to Pinterest
Labels: Terrorism