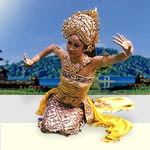 Singaraja, Bali, Apr 22 (ANTARA) - After being hit by two major
terrorist attacks since 2002, Bali is still a very likely target
for any terror group planning to stage a large-scale offensive,
the region's military chief said.

"This is obvious because Bali is a major national as well as
international tourist destination. If Bali is attacked, the
national interest is jeopardized," said Maj Gen Hotmangaraja
Panjaitan, chief of the Udayana Regional Military Command, here
Wednesday.

Pandjaitan whose headquarters is in Denpasar came to Singaraja
to officiate at a ceremony marking the transfer of the command
of Raider Infantry Battalion 900 from Lt Col Suhardi to his
succcessor, Lt Col I Wayan Suarjana.

The raider infantry battalion is one of the Udayana Regional
Military Command's crack units with anti-terror and commando
capabilities.

All regional military commands in the country, except in
Nanggroe Aceh Darussalam (NAD) and Jakarta, have raider infantry
battalions.

Pandjaitan said since the last terrorist attack in Bali a few
years ago, there had been no indications of another terrorist
offensive. "But we all don't want to wait until a new offensive
does happen. We, together with all components of the community,
continue to try to identify any potential terrorist attack and
to preempt any," he said.

Panjaitan said, should a terrorist threat arise in Bali, the men
of Raider Infantry Battalion 900 would serve as a counter strike
force and thus be the first security force to move against the
terrorists.