ISLAM - The War Within 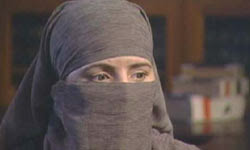 "Leave me for the moment -- you can beat me again later," a
17-year-old girl begs between sobs in a video airing on
Pakistan's private television networks and circulating on the
Internet. But the local Taliban commander continues to flog her
without mercy as a group of village men watch in silence.
These images were described in a recent New York Times dispatch
, which noted that the alleged transgressions of the girl could
not be definitively established. The range of possible
violations of the Taliban's version of Islamic law -- from
stepping outside her house without a male escort to having an
illicit affair -- is appallingly vast.
The video, apparently shot on a cellphone and given to a human
rights activist, is not surprising in itself. The brutal
subjugation of poor, uneducated women in rural Pakistan and
Afghanistan is widely if incompletely known in the West. But the
brief, blurry images are revealing.
The recent U.S. strategic review, as well as learned tomes and
countless op-ed columns, depict the struggle in the desolate
Afghanistan-Pakistan frontier as being rooted in fierce
nationalism, the region's ancient warrior culture, the failures
of nation-building and the rebirth of jihadist terrorism.
But this video reminds us of another driving force too often
neglected or minimized in the analysis and commentary: the
desire of Pakistani and Afghan men to be left in peace to deal
with their womenfolk as they see fit. There may be no more
important recruiting tool for the Taliban and other Islamic
extremist organizations.
This is why the video should be required viewing for U.S.
officials who are urging President Obama to seek accommodation
with the Taliban to help secure a graduated U.S. exit from
Afghanistan and confidently boasting that 70 percent of the
Taliban are "reconcilable."
The Pakistan video is unlikely to change their minds. They have
good arguments about pursuing achievable U.S. goals in a time
frame that is acceptable to the American public. But it will
force them to look at the consequences of that kind of realism.
Moreover, the scene shot in the Swat Valley -- a region the
Pakistani government turned over to the Taliban in February
rather than continue fighting there -- offers its own cultural
commentary on Obama's attempts to reach out to the Muslim world.
In his speech last week in Turkey , he declared that the United
States is not "at war with Islam."
The president is right -- as far as he goes. The struggle
against al-Qaeda and its associates is not a war of religions
with a monolithic Christianity fighting a unified Islam. But it
is a religious war in significance and origin. Fanatical Islamic
sects have framed their battle in holy terms and seek to destroy
their faith's mainstream values. It is not a war on Islam but a
war within Islam. Who wins has enormous consequences for the
world.
That was the missing element in Obama's otherwise admirable
speech, which was delivered in one of the most tolerant,
sophisticated Muslim countries on Earth. The savage misogyny and
feudal fury of the Swat Valley are alien to modern, urban Turkey
-- as they are to Indonesia, where Obama spent part of his
childhood. The countries and personal experiences he focuses on
are Islamic, certainly. But they are not Islam as a whole.
All religions are absorbing the shocks of globalization. But
none has felt more besieged than Islam as the flow of people,
goods and instant communications across borders perturb or limit
its deep reach into gender relations and family structures. And
none has produced as violent a backlash from some of its
adherents.
It is difficult for policymakers and generals to account for
such cultural factors in strategic reviews. We all rush past the
obvious -- until a video from Swat makes it unavoidable.
The realists are right about this: The United States and its
NATO partners cannot "win" the war inside Islam. Perhaps all
they can accomplish is to buy time for mainstream Islamic forces
in Pakistan, Afghanistan and elsewhere to organize an effective
response to the existential threat in their midst. That will be
a costly, and essentially thankless, task for the United States.
But it may yet be the least disastrous course to follow.
"Democracy demands that the religiously motivated translate
their concerns into universal, rather than religious-specific,
values," Barack Obama said in a 2006 speech that warned
Americans against religious intolerance. It's a pity he didn't
include that thought in his Ankara outreach.
The Washington Post
April 12, 2009
Op-Ed
The War Within Islam
Jim Hoagland
Posted by Kerry B. Collison at 1:35 PM

Email ThisBlogThis!Share to TwitterShare to FacebookShare to Pinterest
Labels: ISLAM in Pakistan