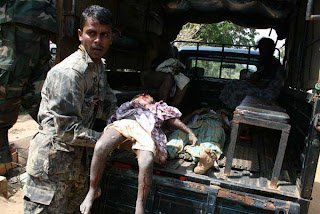 CRISIS IN SRI LANKA
The following statement was issued by the Board of Trustees of the International Crisis Group meeting over the weekend in Washington, DC:
A humanitarian tragedy is unfolding in Sri Lanka involving the possible deaths of tens of thousands of civilians trapped between government and insurgent LTTE (Tamil Tiger) forces in a tiny strip of land not much bigger than Central Park in Manhattan.
As many as 150,000 or more1 civilians are so trapped. Their living area is being shelled by the Sri Lankan military, and the Tamil Tigers are using them as human shield hostages. Dozens are dying every day, and there are grave shortages of food, water, and medical treatment. Available reports suggest 5,000 civilians, including at least 500 children, have died since mid-January, and 10,000 have been injured.
With both the government forces and Tamil Tigers abdicating their responsibility to protect civilians from mass atrocity crimes, urgent, determined, and united international action is necessary to ensure their safety — by the United Nations Security Council, other multilateral organisations, and individual countries with relations with Sri Lanka.
The International Crisis Group urges that the following specific steps be taken:
• The Sri Lankan government should halt its offensive and accept a humanitarian pause monitored by the UN and the ICRC of at least two weeks to give a chance for relief supplies to get in and a humanitarian corridor to be established for civilians to get out.

• UN agencies and the ICRC should be allowed to conduct a needs assessment, and based on the actual number of those trapped in the so-called "no fire zone", bring in the relief supplies needed so long as civilians remain.

• UN agencies and the ICRC must be allowed full access to all areas and at all locations where either civilians or surrendered Tamil Tiger fighters might cross over into government controlled areas. Both civilians and fighters who agree to lay down their arms need stronger international guarantees of their safety. Only international supervision, unhindered by the government, can provide the necessary level of protection.

• The Tamil Tigers should immediately allow civilians to leave the area and cease forced recruitment.

• All means of influencing the Tamil Tigers must be explored, particularly stepped up restrictions on foreign financing and support for the group. The Tamil diaspora has an important role in persuading the LTTE to agree to an internationally supervised pause and allow the trapped civilians to leave the target area.
o But continuing intransigence by the Tigers should not be an excuse for delaying a humanitarian pause, or the government forces acting in a way that results in the death and maiming of their own citizens.

• It should be made very clear by relevant governments and international organisations to leaders of both the Tamil Tigers and the Sri Lankan government that they are liable to be held personally accountable for breaches of international humanitarian law.

• Sri Lanka's development partners should make clear that continued non-emergency funding will not be available if the war ends in a bloodbath.