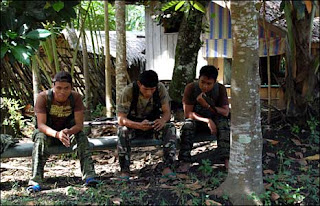 MANILA, Philippines -- Muslim Filipino rebels have helped
Indonesian terror suspects evade capture by giving them refuge
and access to weapons and funds in the southern Philippines, a
government report says.
The information was gleaned from a recently arrested rebel who
told government interrogators that Indonesian terror suspect
Umar Patek has established ties with Filipino militants in the
region.
Patek, who fled to southern Mindanao in 2003, had established links with at least five rebel groups in order to gain a safe haven for Jemaah Islamiyah, a radical Indonesia-based faction.
U.S. and Philippine security officials have long been concerned
that such tie-ups could allow foreign radicals to pass bomb-making skills and their extremist brand of Islam to Filipino militants and turn southern Philippine rebel strongholds into terrorist training grounds.
Patek and fellow suspected terrorist Dulmatin fled to Mindanao a
year after allegedly helping mastermind the 2002 nightclub
bombings in Bali, Indonesia that killed 202 people. They have
remained in Mindanao since then, along with about 40 fellow
Jemaah Islamiyah members.
Venancio, a member of the country's largest Muslim rebel group _
the Moro Islamic Liberation Front _ helped Patek and other
Indonesian radicals move around Mindanao, locating hide-outs and
moving money through different bank accounts.
Venancio was arrested by government intelligence agents last
January in southern Cotabato city in connection with a killing
apparently unrelated to the Muslim insurgency.
and other Indonesians knew ranking commanders of the smaller but more brutal Abu Sayyaf group and the Rajah Solaiman Movement, a violent group of Islamic converts linked to deadly bomb attacks in the southern Philippines.
Patek and Dulmatin also knew a commander of the Moro National
Liberation Front, a group based on southern Jolo island that
signed a 1996 peace pact with the government but whose members
have refused to disarm.
Venancio received bomb-making training as a new rebel recruit in 1997 in a Moro Islamic Liberation Front camp in Mindanao. He trained with about 30 Indonesians and 10 Middle Eastern nationals.
Posted by Kerry B. Collison at 1:50 PM