Cambodia: When justice is delayed 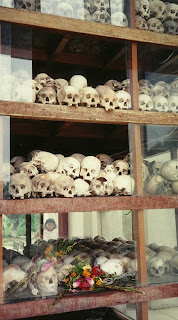 The United Nations seems paralyzed over what to do about the indictment of Sudan’s President Omar Hassan al-Bashir on charges of war crimes by the International Criminal Court. There are warnings of humanitarian crises and dire consequences for Darfur. History suggests, however, that postponing justice could be even worse.
A case in point is Cambodia, where Khmer Rouge leaders are finally being tried 30 years after they were overthrown. (That is the equivalent of waiting until 1975 to try the Nazis.) Cambodia is the classic example of what happens when the international community puts off the hard work of justice in the name of realpolitik.
Trials for Pol Pot and other Khmer Rouge leaders were delayed for all the reasons that are being used today for Sudan. A trial would be impractical while war was still raging; a trial would disrupt the peace process; a trial would upset a hard-won equilibrium and reopen old wounds.
Pol Pot and his comrades were among the worst monsters of the 20th century. But they knew how to work the system, especially in defeat.
First, there was no trial in 1979 because a Soviet ally, Vietnam, overthrew the Khmer Rouge. So instead of imprisoning Pol Pot, the United States, China, Western Europe and Southeast Asia got together and underwrote a guerilla coalition, including the Khmer Rouge, to fight Vietnam. That allowed the Khmer Rouge even to retain Cambodia’s seat at United Nations.
In 1992, a UN peacekeeping operation, UNTAC, arrived to separate the warring parties and hold elections.
The UN also decided that a trial would hinder the establishment of peace. The elections were free and fair. Cambodians voted despite threats from the Khmer Rouge an they voted solidly against keeping Hun Sen, a former Khmer Rouge soldier who had become Cambodia’s prime minister under the Vietnamese.
But Hun Sen refused to give up power. Understanding the UN’s preoccupation with stability, his allies threatened a coup and a war against UNTAC. So UN officials allowed Hun Sen to become co-prime minister, a position he made up for himself.
Hun Sen made good on his coup threat anyway and pushed out Prince Norodom Rannaridh, the man who had actually won the election. Hun Sen has been the leader ever since, overseeing a corrupt government with little respect for human rights or the rule of law. And he has had no interest in a serious trial of the Khmer Rouge.
The UN negotiated for nearly 10 frustrating years to arrive at the hybrid tribunal for crimes against humanity — The Extraordinary Chambers in the Courts of Cambodian — slowly getting underway in Cambodia. In the meantime, Pol Pot and some of the seniormost leaders of the Khmer Rouge have died, some murdered.
A new generation of Cambodians has grown up largely ignorant of their country’s history, which is concealed under official propaganda. Many younger Cambodians believe that the Vietnamese or the Chinese are to blame for the killings. They can not imagine Cambodians willfully killing off nearly one-fourth of the population, undermining their country’s society, culture and future in the name of a radical revolution.
The trial was supposed to help remedy that national ignorance. But the UN has had to make critical compromises just to get the Hun Sen government to agree to a tribunal in Phnom Penh, the Cambodian capitol, with a mixed set of Cambodian and international jurists, prosecutors and lawyers and staff.
Questions of corruption have already slowed the proceedings, as have restrictions on investigations and procedures that other courts would have never accepted. It is dubious that the tribunal can really set the historical record straight.
Only one conviction is certain. The first defendant, Kaing Guek Eav, known by his alias as Duch, was the junior official who ran the regime’s central torture chamber. He admitted guilt years ago after converting to Christianity.
The next proceeding is supposed to cover four of the most senior living Khmer Rouge officials. They deny their guilt, and their crimes may never be fully investigated.
I have interviewed all the men who led Cambodia through its catastrophic modern history — King Norodom Sihanouk, Lon Nol, Pol Pot and Hun Sen — as well as several senior Khmer Rouge officials. They played different roles at different times with different allies. Not one of them admitted any responsibility for the terrible suffering inflicted on their people.
At the rate things are going, the few Khmer Rouges leaders facing trial, aged and in declining health, will die protesting their innocence. There will be no apology or restitution to Cambodians, today among the poorest and most poorly treated people in the world.
This is what awaits Sudan if charges against President Bashir do not go forward and trials against him and others are postponed.
Elizabeth Becker, a former correspondent for the Washington Post, National Public Radio and The New York Times, is the author of “When the war was over, a history of the Khmer Rouge and Modern Cambodia.”
International Herald Tribune
Posted by Kerry B. Collison at 2:24 PM