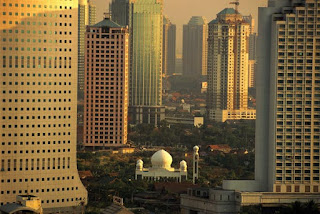 State-owned construction company PT Waskita Karya has falsely
inflated profit and revenue in its budgets to the tune of Rp 500
billion ($43.5 million) over the past years, Sofyan Djalil, the
state-owned enterprises minister, said on Friday.

“Waskita needs to fix the overstatement problem over the past
few years,” Sofyan said, without elaborating further on the
disputed figures. “The problem is that the company was using the
wrong accounting system.”

Sofyan also said that his ministry was currently increasing
supervision of the 14 SOEs that specialize in construction and
would likely reshuffle their directors. Waskita’s management
could not be immediately reached for comment. - JG

Transportation Minister Jusman Syafii Djamal said his ministry
was considering proposing a higher tax on aging airplanes than
on newer ones.

"Ideally, aging planes should be subject to higher taxes. This
is expected to indirectly discourage the use of aging fleets and
make airline companies aware of the fact that using old planes
is inefficient," the minister said in Jakarta as quoted by
Antara newswire on Friday.

The minister made the statement in connection with the frequent
occurrence of accidents involving old planes of late.

Last Wednesday, a B737-200 passenger plane of Batavia Air
developed a leak in one of its engines forcing it to cancel its
take off from Soekartno-Hatta airport.

On March 23, a plane of the same type of Sriwijaya Air made an
emergency landing at Hang Nadim Aiport, Batam, after one of its
engines failed.

But the minister did not say when the progressive tax on old
airplanes would be imposed. "This is an option. We want planes
operated in Indonesia to have a maximal age of 21 years," the
minister said.

He said it would be better if Indonesia could follow the example
of Singapore where every plane which had been in operation for
five years was 'put to rest'.

Djamal said that his ministry was encouraging airline companies
to merge in an effort to avoid stiff competition among them.

"Ideally, Indonesia should only have seven airline firms with a
fleet of 400 airplanes," the minister said.