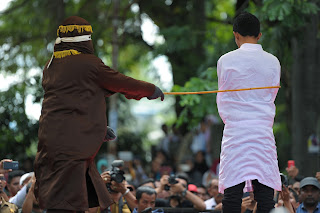 A religious officer canes an Acehnese man  100 times for having sex outside marriage, which is against sharia law, in Banda Aceh on November 28, 2016. Aceh is the only province in the world’s most populous Muslim-majority country that imposes sharia law.


Radical notions of Islam are gaining mainstream resonance in Indonesia and Malaysia, a trend that is drowning out more moderate views and voices 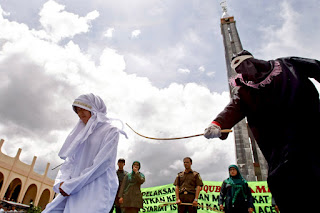 Even the victims are punished. This is an Acehnese woman who was raped being caned for being the victim

Recent terror attacks in Indonesia and Malaysia, orchestrated by local groups with ties to international terror organization ISIS, have raised warnings of growing radicalization in both Muslim majority countries. The risk is rising not only on the fringes of society but also among the mainstream public, witnessed in the growth of Islamic groups that have targeted religious and ethnic minorities, and a lurch towards more conservative positions taken by prominent political parties.


The battle over religious interpretation is not new in either country. In fact, it has been a constant since each country gained its independence from colonial rule. In Indonesia, the world’s largest Muslim nation, there has long been a fault-line between what the American anthropologist Clifford Geertz first identified as the santri, who adhere to orthodox forms of Islam, and the abangan, who practice more syncretic versions of the faith.


A number of new factors, however, are contributing to an increasingly intolerant trend. One has been the rise of Salafism, a conservative, often puritanical, movement within Sunni Islam originating mainly from Saudi Arabia. In Southeast Asia, despite certain differences, the term is frequently used interchangeably with Wahhabism, a branch of the Islam often associated with ISIS and Al-Qaeda.


Despite Salafi movements in Indonesia and Malaysia in the early twentieth century, the sect arrived with greater force in the 1980s, when scholars educated in Saudi Arabia returned home to spread their learning. This was fuelled by growing Saudi hegemony in the Islamic world, boosted by oil riches and by the supposed threat posed by political Shi’a Islam after the 1979 revolution in Iran.


This is, of course, not to say that all Salafists endorse jihad or condone terrorism. But its influence has “over time contributed to a more conservative, more intolerant atmosphere,” said Sidney Jones, the director of the Institute for Policy Analysis of Conflict in Jakarta. Indeed, the Jakarta Post reported in September that the Salafi movement is gaining ground in the public sphere through strategic use of broadcast media.


Ahmad Fauzi Abdul Hamid, a professor of political science at the Universiti Sains Malaysia, said that Malaysian Muslims are “surely but slowly becoming radicalized”, highlighting the teaching of Salafi-orientated curricula in schools as a cause. “People don’t realize it, but this way of thinking has now become mainstream.”


The internationalization of Islam, and specifically transnational terror group-inspired violence in the name of jihad, has added a volatile element to the mix. That was seen on January 14, 2016, when ISIS-linked local terrorists detonated explosions and ripped gunfire in downtown Jakarta, leaving seven people dead and dozens injured. In Malaysia, the first confirmed ISIS attack took place in June when eight people were injured after a bomb exploded in a nightclub in the town of Puchong.


The attacks raised alarm that pan-Islamism is working to transplant local identities with a commitment to a more puritanical, cross-border approach to ummah, the Islamic community. It is thus no wonder that liberal Islamic organizations are keen to stress localized, nationalist forms of Islam as a counter-narrative. Those moderate voices, however, are often being tuned out by radical ideology spread over social media. Recent research shows that ISIS supporters send an average of 2.8 million messages per day to global followers over Twitter.


Yahya Cholil Staquf, NU’s Supreme Council general secretary, claims that Islamic teaching influences extremism, a view rejected by some religious leaders who blame socioeconomic issues as the real problem. He said that literal readings of provisions within fiqh (Islamic jurisprudence) allow for acts such as slavery and executions, and that a serious thoughtful debate must be held over how Islamic texts are read and their place in Indonesian society.


Such debates are not new, however. Intellectuals such as Chandra Muzaffar of Malaysia and Azyumardi Azra of Indonesia, to name just two, have long argued that universal values like freedom, democracy, and modernity can be compatible with classic Islamic teachings. More conservative voices argue to the contrary. Open discussion, however, can be difficult in Indonesia.


Irwan Johan, a vice speaker for the Provincial Legislature of Aceh, said recently that despite a “silent majority” who think the semi-autonomous province has gone too far in its imposition of Sharia law – which it introduced in 2001, the only Indonesian province to do so – most people are “not brave enough to say anything.” He said since politicians could be voted out and individuals ostracized from communities, “Everybody became a hypocrite.”

To be sure, other factors such as poverty and social alienation are relevant to the debate. One long-held explanation for Malaysia’s more moderate stance relative to other Muslim-majority countries is its comparatively low poverty rate, officially at just one percent. Radical groups have successfully used notions of social justice in their recruitment drives in poorer Muslim countries. But with economic inequality rising in many Muslim areas of Southeast Asia, such messages could gain deeper resonance.


In 2016, for example, Indonesia’s extremist Islamic Defenders Front (FPI) established charity operations in areas where people had been evicted from their homes as part of a drive to ‘clean up’ Jakarta led by governor Basuki Tjahaja ‘Ahok’ Purnama, a Christian of Chinese descent. While the FPI have “no particular interest in social justice”, according to Ian Wilson, who researches Indonesian politics at Australia’s Murdoch University in Australia, “what is surprising… is how fast young people in these neighborhoods have become sucked into FPI ideology.”


Viewpoints often associated with the radical fringe, however, surprisingly resonate more widely in both Indonesia and Malaysia. In 2013, the US-based Pew Research Center found in a worldwide survey that 72 percent of Indonesians favored the introduction of Sharia law. In Malaysia, 86 percent of respondents said they did, higher than the percentages recorded in Pakistan, Bangladesh and Egypt. Of the survey’s respondents who favored Sharia, 60 percent of Malaysians and 48 percent of Indonesians thought stoning to death was an appropriate penalty for adultery.