How Trump Could Blunder Into War With China – Analysis 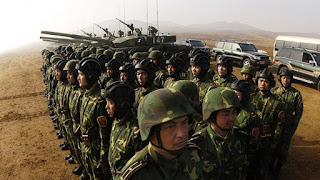 
In his Jan. 13 testimony before the Senate Foreign Relations Committee, secretary of state nominee Rex Tillerson made an extraordinary comment concerning China’s activities in the hotly disputed South China Sea. The United States, he said, must “send a clear signal that, first, the island-building stops,” adding that Beijing’s “access to the those islands is not going to be allowed.”


Sometimes it’s hard to sift the real from the magical in the Trump administration, and bombast appears to be the default strategy of the day. But people should be clear about what would happen if the U.S. actually tries to blockade China from supplying its forces constructing airfields and radar facilities on the Spratly and Paracel islands.


It would be an act of war.


While Beijing’s Foreign Ministry initially reacted cautiously to the comment, Chinese newspapers have been far less diplomatic. The nationalist Global Times warned of a “large-scale war” if the U.S. followed through on its threat, and the China Daily cautioned that a blockade could lead to a “devastating confrontation between China and the U.S.”


Independent observers agree. “It is very difficult to imagine the means by which the United States could prevent China from accessing these artificial islands without provoking some kind of confrontation,” says Rory Medcalf, head of Australia’s National Security College. And such a confrontation, says Carlyle Thayer of the University of New South Wales, “could quickly develop into an armed conflict.”

The Roots of China’s Anxiety

A certain amount of this is posturing by two powerful countries in competition for markets and influence, but Tillerson’s statement didn’t come out of the blue.


In fact, the U.S. is in the middle of a major military buildup — the Obama administration’s “Asia Pivot” in the Pacific. American bases in Okinawa, Japan, and Guam have been beefed up, and for the first time since World War II, U.S. Marines have been deployed in Australia. Last March, the U.S. sent B-2 nuclear-capable strategic stealth bombers to join them.


There is no question that China has been aggressive about claiming sovereignty over small islands and reefs in the South China Sea, even after the Permanent Court of Arbitration at The Hague rejected Beijing’s claims. But if a military confrontation is to be avoided, it’s important to try to understand what’s behind China’s behavior.


The current crisis has its roots in a tense standoff between Beijing and Taiwan in late 1996. China was angered that Washington had granted a visa to Taiwan’s president, Lee Teng-hui, calling it a violation of the 1979 U.S. “one-China” policy that recognized Beijing and downgraded relations with Taiwan to “unofficial.”


Beijing responded to the visa uproar by firing missiles near a small Taiwan-controlled island and moving some military forces up to the mainland coast facing the island. However, there was never any danger that China would actually attack Taiwan. Even if it wanted to, it didn’t have the means to do so.


Instead of letting things cool off, however, the Clinton administration escalated the conflict and sent two aircraft carrier battle groups to the region, the USS Nimitz and USS Independence. The Nimitz and its escorts sailed through the Taiwan Straits between the island and the mainland, and there was nothing that China could do about it.


The carriers deeply alarmed Beijing, because the regions just north of Taiwan in the East China Sea and the Yellow Sea were the jumping off points for 19th and 20th century invasions by western colonialists and the Japanese.


The Straits crisis led to a radical remaking of China’s military, which had long relied on massive land forces. Instead, China adopted a strategy called “Area Denial” that would allow Beijing to control the waters surrounding its coast, in particular the East and South China seas. That not only required retooling of its armed forces — from land armies to naval and air power — it required a ring of bases that would keep potential enemies at arm’s length and also allow Chinese submarines to enter the Pacific and Indian oceans undetected.


China is particularly vulnerable to a naval blockade. Some 80 percent of its energy supplies traverse the Indian Ocean and South China Sea, moving through narrow choke points like the Malacca Straits between Indonesia and Malaysia, the Bab al Mandab Straits controlling the Red Sea, and the Straits of Hormuz into the Persian Gulf.


All of those passages are controlled by the U.S. or countries like India and Indonesia with close ties to Washington.


In 2013, China claimed it had historic rights to the region and issued its now famous “nine-dash line” map that embraced the Paracels and Spratly island chains — and 85 percent of the South China Sea. It was this nine-dash line that the Hague tribunal rejected, because it found no historical basis for China’s claim, and because there were overlapping assertions by Taiwan, Vietnam, Malaysia, Brunei, and the Philippines.


There are, of course, economic considerations as well. The region is rich in oil, gas and fish, but the primary concern for China is security. The Chinese haven’t interfered with commercial ship traffic in the territory they claim, although they’ve applied on-again, off-again restrictions on fishing and energy explorations. China initially prevented Filipino fishermen from exploiting some reefs, and then allowed it. It’s been more aggressive with Vietnam in the Paracels.

Rather than trying to assuage China’s paranoia, the U.S. made things worse by adopting a military strategy to checkmate “Area Denial.”


China’s recent seizure of a U.S. underwater drone off the Philippines is part of an ongoing chess game in the region. The drone was almost certainly mapping sea floor bottoms and collecting data that would allow the U.S. to track Chinese submarines, including those armed with nuclear missiles. While the heist was a provocative thing to do — it was seized right under the nose of an unarmed U.S. Navy ship — it’s a reflection of how nervous the Chinese are about their vulnerability to Air/Sea Battle.


China’s leaders “have good reason to worry about this emerging U.S. naval strategy [use of undersea drones] against China in East Asia,” Li Mingjiang, a China expert at S. Rajaratnam School of International Studies in Singapore, told the Financial Times. “If this strategy becomes reality, it could be quite detrimental to China’s national security.”


Washington charges that the Chinese are playing the bully with small countries like Vietnam and the Philippines, and there is some truth to that charge. China has been throwing its weight around with several nations in Southeast Asia. But it also true that the Chinese have a lot of evidence that the Americans are gunning for them.


The U.S. has some 400 military bases surrounding China and is deploying anti-ballistic missiles in South Korea and Japan, ostensibly to guard against North Korean nuclear weapons. But the interceptors could also down Chinese missiles, posing a threat to Beijing’s nuclear deterrence.


While Air/Sea Battle does not envision using nuclear weapons, it could still lead to a nuclear war. It would be very difficult to figure out whether missiles were targeting command centers or China’s nukes. Under the stricture “use them or lose them” the Chinese might fear their missiles were endangered and launch them.


The last thing one wants to do with a nuclear-armed power is make it guess.

The Trump administration has opened a broad front on China, questioning the “one China” policy, accusing Beijing of being in cahoots with Islamic terrorists, and threatening a trade war.


The first would upend more than 30 years of diplomacy, the second is bizarre — if anything, China is overly aggressive in suppressing terrorism in its western Xinjiang Province — and the third makes no sense.


China is the U.S.’s major trading partner and holds $1.24 trillion in U.S. treasury bonds. While Trump charges that the Chinese have hollowed out the American economy by undermining its industrial base with cheap labor and goods, China didn’t force Apple or General Motors to pull up stakes and decamp elsewhere. Capital goes where wages are low and unions are weak.


A trade war would hurt China, but it would also hurt the U.S. and the global economy as well.


When Trump says he wants to make America great again, what he really means is that he wants to go back to that post-World War II period when the U.S. dominated much of the globe with a combination of economic strength and military power. But that era is gone, and dreams of a unipolar world run by Washington are a hallucination.


According to the CIA, “by 2030 Asia will have surpassed North America and Europe combined in terms of global power based on GDP, population size, military spending and technological investments.” By 2025, two-thirds of the world will live in Asia, 7 percent in Europe and 5 percent in the U.S. Those are the demographics of eclipse.


If Trump starts a trade war, he will find little support among America’s allies. China is the number one trading partner for Japan, Australia, South Korea, Vietnam, and India, and the third largest for Indonesia and the Philippines. Over the past year, a number of countries like Thailand, Malaysia, and the Philippines have also distanced themselves from Washington and moved closer to China. When President Obama tried to get U.S. allies not to sign on to China’s new Asian Infrastructure Investment Bank, they ignored him.


But the decline of U.S. influence has a dangerous side. Washington may not be able to dictate the world’s economy, but it has immense military power. Chinese military expert Yang Chengjun says “China does not stir up troubles, but we are not afraid of them when they come.”


They should be. For all its modernization, China is no match for the U.S. However, defeating China is far beyond Washington’s capacity. The only wars the U.S. has “won” since 1945 are Grenada and Panama.


Nonetheless, such a clash would be catastrophic. It would torpedo global trade, inflict trillions of dollars of damage on each side, and the odds are distressingly high that the war could go nuclear.


U.S. allies in the region should demand that the Trump administration back off any consideration of a blockade. Australia has already told Washington it will not take part in any such action. The U.S. should also do more than rename Air/Sea Battle — it should junk the entire strategy. The East and South China seas are not national security issues for the U.S., but they are for China.


And China should realize that, while it has the right to security, trotting out ancient dynastic maps to lay claim to vast areas bordering scores of countries does nothing but alienate its neighbors and give the U.S. an excuse to interfere in affairs thousands of miles from its own territory.


*Foreign Policy In Focus columnist Conn Hallinan can be read at dispatchesfromtheedgeblog.wordpress.com and middleempireseries.wordpress.com