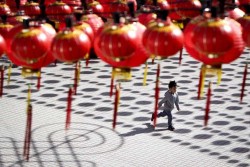 Bersih's ability to mobilise tens of thousands of people for a 34-hour protest at the weekend is a worrying development for Malaysia's long-ruling Umno-led Barisan Nasional government, which is used to outlasting political opposition.


A source of comfort perhaps for Prime Minister Najib Razak's Umno is the low turnout among the majority Malay community.

Mingguan Malaysia, the Sunday edition of Umno's Utusan Malaysia newspaper, wasted no time in painting the rally as a success for the opposition Chinese-dominated Democratic Action Party (DAP), accusing it of exploiting the split in the Malay electorate.

The newspaper called for sterner action to be taken in dealing with the organisers of what the government has called an illegal rally.

Opposition and Bersih leaders were quick to play down the lower Malay attendance, turning to rhetoric that all the supporters were "Malaysian". The Malay turnout was estimated at less than a fifth of the total, compared with more than half in the three previous Bersih-led rallies.

"This is nothing racial, nothing communal. We cannot just show our care for votes. It must come from the heart to know each other better," New Hope Movement (GHB) leader Hatta Ramli told a largely Chinese crowd who had resumed proceedings after a sleepover in the streets of Kuala Lumpur.

The GHB is a splinter group from Parti Islam SeMalaysia (PAS), a key opposition party that has been at odds with its former partner DAP.

PAS refused to mobilise its supporters for Bersih, robbing the demonstration of tens of thousands that the Islamic party had bussed in for the three previous rallies.

"This highlights the fact that civil society demands are championed by political parties, so when one pulls out, it is very obvious," think-tank Ideas chief Wan Saiful Wan Jan explains.

Several analysts also point out that support from parties such as PAS, which has a well-oiled machinery, helps Malays, who are largely poorer than their Chinese countrymen and mostly live farther from the capital, to attend such events.

A pre-rally survey by respected pollster Merdeka Centre found that support for Bersih was only 23 per cent among Malays, 31 per cent in rural areas, and 28 per cent for those earning less than 3,000 ringgit (Bt26,000) a month.

"The survey reveals a peninsular Malaysia electorate that is polarised along ethnic and socio-economic lines," the opinion research firm said.

Umno's more strident pro-Malay leaders are likely to demonise the Bersih rally on racial grounds, following the cue of the ruling party's mouthpiece on Sunday.

"To discourage the Malays to join Bersih 4, one may just need to warn them, if Malays join in enthusiastically, then not only Najib Abdul Razak will go, Umno will lose power too, and the now politically assertive Chinese will dismantle the New Economic Policy and weaken Islam," Bersih activist Wong Chin Huat wrote.

Some observers say it is likely that Mahathir Mohamad, who led Umno for 22 years, took part in the rally to try to take the steam out of such a narrative, as he continues his campaign to get Najib to step down.

Mahathir said he had met both Umno and PAS members, who told him "they would like to support me [turning up at Bersih] but their bosses said, 'No, you must be loyal to party leadership'."

Mingguan Malaysia made clear mention of Mahathir's presence in its Sunday editorial, claiming that "feedback especially from Malays was one of discomfort and anger with his appearance".

Managing editor of the Umno-controlled New Straits Times Abdul Jalil Hamid also wrote that it was ironic for "the country's once most powerful man, who ruled Malaysia for 22 years with an iron fist", to support street protests, having lambasted such tactics just last year.

Deputy Prime Minister Ahmad Zahid Hamidi appears to have already taken heed of the newspapers' narrative, telling Umno members on Sunday not to support "a leader who comes to the rally for only six minutes", referring to Mahathir's brief appearance, and also promised that action would be taken against Bersih leaders despite a peaceful assembly.

But Wan Saiful said the government should be worried about "a politically activated middle class" as they "have the ability to sustain the momentum for significant political changes".