‘Dragonflyers”Kerry B. Collison features in this new release about prominent expats influencial roles in Indonesia 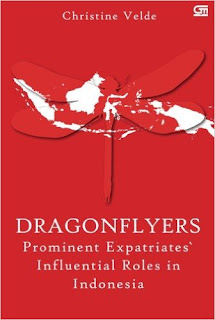 
Kerry B. Collison features in this new release available from Amazon or in Indonesia through Gramedia Publishing

Synopsis: Prominent Expatriates' Influential Roles in Indonesia This book explores the lives of prominent expatriates working in varying fields and aims to understand why they were drawn to Indonesia and examines their diverse, but valuable contributions to Indonesia and its way of life. In doing so, it will facilitate a better understanding for readers in the East and the West regarding the contributions of prominent expatriates to Indonesia and their feelings towards a country which in many cases, may have become their 'home.' Dragonflies which have been described as fantastic flyers, darting, twisting, turning and transforming, are just like expatriates who have contributed to Indonesia in a variety of fields. Like dragonflies, they are also reminders that we can reflect light in powerful ways. They contribute to others by helping them to see through their misinterpreted illusions and allowing their own light to shine in a new vision, like academics, artists, writers or entrepreneurs. 'Much of Indonesia outside of Jakarta and other major cities, we found incredibly beautiful. The greatest attraction of the country was the pleasure of working with Indonesians who accepted me as a colleague, rather than a dangerous foreigner, who had to be kept at a distance. Over time, both my wife and myself became greatly attached to Indonesia, both personally and professionally.' -Gustav Papanek- 'Living in Indonesia is very different to living in Australia. It has changed from the turbulent situation during the 1980s and 1990s, and is now much more open and liberal. For most foreigners living and working in Indonesia, it takes time and effort to develop the skills and understanding, that best enable them to operate in Indonesia. Personally, I have always found most Indonesians very welcoming.' -David Hill- 'I have acquired an enriched understanding of another culture. I possess another language and this opens up the mind immeasurably. Through speaking the language, we can get much closer to people and be a part of the decision making process. I am more relaxed about life in general, through my Indonesian experiences.' -David Reeve- 'I can sympathise with the idea of being a 'global citizen', but believe that those with experiences of other cultures must be able to share these experiences and insights with members of their own culture. Indonesia gains most value from me not when I think like an Indonesian, but when I act like an Australian who knows and respects Indonesian culture and can present diff erent and distinct perspectives on it: to Australians and Indonesians alike.' -Harry Aveling-
Posted by Kerry B. Collison at 10:47 PM