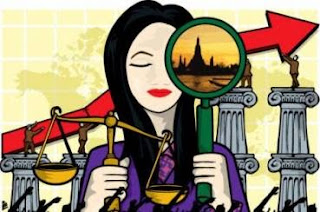 President Joko Widodo's administration has made reform a top priority, but seemingly rushed measures introduced by his ministers are creating havoc, raising concerns and angering many business owners and executives.

Not everyone is smitten with Susi Pudjiastuti, Indonesia's maritime affairs minister. Fishermen gather near a presidential palace in Jakarta to demand she be sacked in Febr
Roughly six months since coming to power, one ministry after another in Widodo's government has started announcing various regulations. Some of the new measures do not seem to be well thought out. The mess stemming from rushed efforts to deliver on a key election promise could curb much-needed investment as well as an export recovery.


And with economic growth languishing at its lowest level in five years, the timing could not be worse.


Playing to the public


"Some stores are already suffering 10% to 30% sales declines," an executive of a chain of convenience stores said.


The executive was bemoaning a new regulation that prohibits sales of alcoholic beverages at convenience and other small stores, even if the beverage's alcohol content is 5% or less. Many of these stores' customers used to stop by to pick up some beer along with some edibles. Now they don't come in, so the new regulation's negative impact has reached beyond alcohol sales.


The Ministry of Trade introduced the rule, which took effect April 16. The intent is to "correct deteriorated public morals," Trade Minister Rachmat Gobel has said.


Nearly 90% of Indonesians are Muslims, whose religion bans booze. Some view the new regulation as the minister pandering to religious conservatives.


Not to be thwarted, the minister has indicated the possibility of banning online sales of alcoholic beverages.


Naturally, these developments are deeply concerning for the booze industry. A rumor is even circulating that Bintang, the country's No. 1 beer brand, will postpone plans to expand a brewery.


The new rule's fairness is also being questioned. When the ban was announced, the ministry insisted it would cover the popular tourist spot of Bali. But the trade minister exempted the island at the 11th hour, enabling beach vendors to continue selling beers to tourists.


Indonesia has been plagued by a chronic current account deficit. The situation has opened the trade ministry to protectionist temptations. This can explain why some recent "reforms" seem to run contrary to what most people expect.


A new measure requiring natural resource exporters to use letters of credit to settle their transactions was to take effect April 1. It was canceled at the last minute, however, creating confusion among many related businesses.


When President Widodo took office Oct. 20, he skipped over career politicians to fill his administration with experts who possess knowledge and experience in relevant fields. Trade Minister Gobel, for instance, was a successful businessman who managed a joint venture with Japan's Panasonic.


The president calls his team a working cabinet. The subtext is that any minister not producing results will quickly lose his or her job. This has put ministers under pressure to introduce attention-grabbing policies, gain popular support and please Widodo.


Susi Pudjiastuti, a former fish broker who now serves as the country's minister of maritime affairs and fisheries, is Widodo's most popular minister. With her husky voice and a tattoo on one of her legs, she stands out. Her bold actions, such as capturing illegal foreign fishing boats and sinking them with explosives, have stunned many, both at home and abroad. At the same time, they have jacked up her approval ratings.


However, fishermen and fishing-related businesses are quite unhappy about new regulations introduced under her watch.


When fishermen picketed in front of a presidential palace in February, one sign read, "Susi may be a public idol [idola in Indonesian], but she is as deadly as Ebola."


Since Susi took her position, the fisheries ministry has banned trawling, catching pregnant lobsters and transferring catches from one ship to another while out at sea. In addition, fishing licenses for foreign-registered fishing boats are not being extended.


These measures, introduced in the name of preventing overfishing and illegal exports, have resulted in "halving the volume that fishermen hand over to seafood companies," a high-ranking representative of a fisheries industry organization said.


Growing uncertainties over the Widodo administration's reform drive are also putting other industries under a shadow. If Indonesia's economy is to thrive, it will need foreign investment and higher exports. But the Ministry of Industry is considering new regulations that could hinder the growth of the country's auto industry.


The ministry has turned its attention to the fact Japanese brands control 90% of Indonesia's auto market. To nurture the domestic industry, the ministry is contemplating caps on imports of autoparts and exports of finished vehicles.


"Ad hoc, stopgap measures like these can lead to lowering the Indonesian car industry's global competitiveness," said an executive at an Indonesian unit of a Japanese bank.


As chaos and frustration mount, there are growing calls from Indonesia's business community for the president to replace economy-related ministers. But giving in to these pleas might not produce anything positive. The best course of action could be to give the new government a little more time. SADACHIKA WATANABE, Nikkei staff writer