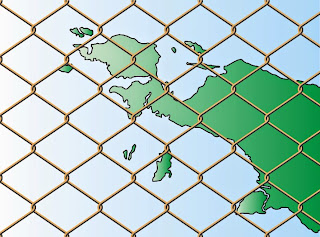 Jakarta. President Joko Widodo has declared Indonesia’s easternmost provinces of Papua and West Papua as open to foreign journalists, as part of what he calls a new paradigm in addressing longstanding grievances in the region.

The president, winding up a four-day visit to the region, said on Sunday that he wanted to end the widely held perception of the two provinces, known collectively as Papua, as a conflict zone, stressing that a military-first approach to problems stemming from a low-level insurgency was being replaced by a community empowerment drive.


“Starting from today, foreign journalists are allowed and free to come to Papua, just as they can [visit] other regions,” Joko said at a press conference in Merauke, Papua province.


Jakarta has long maintained an international media blackout in Papua, where indigenous groups have for decades been waging a battle for self-determination against the security forces.


Indonesian authorities briefly jailed two French journalists there last year for visa violations, after they were caught allegedly trying to arrange interviews with members of the Free Papua Organization, or OPM, a banned separatist group.


Joko dismissed concerns that calls for independence would grow louder with foreign journalists granted access to the region.


“We must think positively. The decision must be carried out. Let’s not scrutinize negative aspects of this matter,” he said.


The country’s chief security minister, however, indicated nothing had changed in Jakarta’s stance vis-a-vis allowing the foreign press to report from the region.


“We’ll allow it, on condition that they report on what they see, not go around looking for facts that aren’t true from armed groups,” said Tedjo Edhy Purdijatno, the coordinating minister for political, legal and security affairs, effectively ruling out any attempt by foreign journalists to contact OPM members and other separatist sympathizers.


He added that journalists would also need permission from the authorities to report from the country’s mountainous hinterland — the heart of the insurgency.


“There’s a lot of news out there that makes it look like [human rights] violations are taking place here all the time, but I don’t think that’s the case,” Tedjo said.


Indonesia maintains a heavy security presence in Papua and West Papua, with both the military and the police frequently accused of blatant abuses of the human and civil rights of residents, including the firing of live ammunition into a crowd of peaceful protesters last December that killed five people and injured dozens, including school students in Paniai district.


No one has been charged or disciplined over that incident.


Joko, in his second visit to the region since his inauguration last October, also used the occasion to pardon five political prisoners serving 20 years to life in prison for their role in the independence struggle.


Jafrai Murib and Numbungga, sentenced to life, and Linus Hiluga, Kimanus Wenda and Apotnagolit Enus, who were given 20 years each, walked free from Abepura Penitentiary in Jayapura, the Papua provincial capital, on Saturday after Joko signed their pardons on Saturday.


“This is part of the government’s serious efforts to banish the stigma of conflict in Papua. These pardons are granted as part of a reconciliatory framework to create a peaceful Papua,” the president said. “We want to turn Papua and West Papua into peaceful lands,” he added as quoted by Kompas.


Human rights activist Olga Hamadi welcomed the release of the Papuan prisoners, but said the government had robbed them of years of their life and their health, and owed them restitutions.


“They always had the right to be free,” said Olga, the head of the Papua chapter of the Commission for Missing Persons and Victims of Violence, or Kontras.


“They were in prison for 12 years. They became ill from the poor treatment they suffered while under military and police custody and in prison.”


Latifah Anum Siregar, a lawyer for the five men, said that Kimanus had tumor in his stomach, while Jafrai had suffered a debilitating stroke.


“Before sending them back to their families, the government must give them a health check,” she said.


Joko said he was considering extending similar pardons to other political prisoners across the country, of whom there are an estimated 60, most of them in the Papuas and Maluku, where a separatist insurgency is also being waged.


Semuel Waileruny of the Maluku Civil Community Advocacy Center said none of them deserved imprisonment, because their demands for independence had been peaceful.


“But these actions should be seen as part of the freedom of expression, which should be protected by law. These people, though, have been arrested and accused of conspiring against the state. And they’ve often been tortured and imprisoned for up to 20 years.”


Natalius Pigai, a native Papuan and serving commissioner on the National Commission for Human Rights, or Komnas HAM, said the token release of a handful of political prisoners was not enough to bring peace to Papua.


“Pardons are something a president regularly hands out. What we need is a grand design, not just a ceremonial pardoning of political prisoners,” he said.


Natalius accused the president of trying to win brownie points with the international community, after the fallout from the execution of foreign drug convicts, by freeing the prisoners without having any serious plan to address the underlying causes for the unrest in Papua.


He said Joko must start engaging in dialogue with the people in Papua to understand their points of view and what they wanted, as part of the “grand design” to bring peace and prosperity to the region.


“People in Papua want to feel the government’s presence; they want the government to pay attention to their lives, not just exploit Papua as a campaign tool before the international public,” Natalius said.