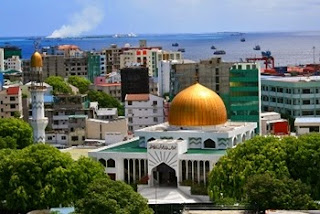 A nascent democracy looks to be coming apart at the seams.


Democracy comes at a price. It demands a long and arduous struggle, peppered with sacrifice, blood, sweat and tears. Nurturing a democracy demands much more.


Every struggle for democracy has had its own DNA, its own challenges, and its own martyrs – all natural to the environment in which the seed of the idea first took root. It requires a people to have long suffered oppression, tyranny and injustice. It yearns for the freedom to dream and achieve. It feeds on aspirations and a belief that tomorrow can be – and must be – better than today. That the next generation deserves more, that the new dawn may bathe them in new light.


But what happens when democracy is just handed to you? When the state provides and “bestows favor” and when the mind is conditioned to wanting so little. When the opportunity cost of daring to dream a different dream is simply not worth risking the loss of livelihood.


The Maldives presents one such tantalizing socio-political conundrum.

For 30 years since 1978, the Maldives (with a current population of fewer than 400,000) was ruled by President Maumoon Abdul Gayoom. Literacy levels were low, connectivity to the atolls and islands rudimentary, and the economy basic. For almost every need – from education to healthcare and even employment, Maldivians were – and to a very large extent remain – dependent on the state. If a family member was sick and needed treatment in Sri Lanka or India, the government would give money. If the rare child sought college or higher education, the government would grant a scholarship. Once a child completed a certain level of education, he or she was eligible for employment by the government in one department or another. For the most part, Maldivians were indebted to and dependent on the state, but content with that. It was the only way of life they could conceive of – a way of life that many Maldivians would ironically prefer today.


But then came the bestowing of democracy and the sweeping to power of activist-turned-politician Mohamed Nasheed. Here was a president who would walk, even cycle to office with just a handful of bodyguards shadowing him. He would pop in to share a cuppa with average working class Maldivians in Male; organize an underwater meeting of his Cabinet to highlight the threat from global warming; and, in general, become the darling of the international community, bringing Maldives into the global limelight like never before. Beyond the optics however, there was a conscious effort to improve the everyday lives – and futures – of Maldivians through better connectivity to the atolls and islands, better healthcare and education, and other policies. It was all very new, quite fascinating and highly appealing to an increasingly younger and restless cross-section of youth that was becoming the prominent demographic in Maldives.


Ever since the coup that toppled Nasheed in 2012, anger and resentment has been simmering beneath the placid blue waters of this Indian Ocean paradise. But with rampant corruption and nepotism becoming intolerable, the crackdown first on opposition leaders, including the sham trial and imprisonment of Nasheed, followed by an equally questionable trial and imprisonment of serving Defence Minister Mohamed Nazim, has brought that anger boiling onto the streets of Male.


Maldivians must be the most civilized of protesters. The February 27 protest in Male witnessed more than 17,000 people take to Male’s streets, demanding the resignation of President Abdulla Yameen and the release of Nasheed from detention. Thirty protesters were arrested in clashes after the protest was officially ended at the designated hour. Not the sort of ending one would have imagined, given the rhetoric in the buildup. It was almost as if the Pumpkin Express was leaving at the designated hour and God forbid you left a glass flip-flop behind!


Though the protest saw a record turnout against the government, it ended with a sense of unfinished business. Perhaps the opposition did not expect so many people.


Despite the arrests on February 27, street-corner protests continued for the next few weeks and peaked with the sentencing of Nasheed on March 13 – he was given 13 years. Here too, the protests were delightfully tame. Groups of women protesters – most from Nasheed’s MDP – would surround a young policeman and heckle him. To an outsider – especially from India – they would appear less boisterous than ragging sessions in a women’s college in Delhi University.


The opposition alliance of the MDP-JP-Adhaalath Party had done its work well, bringing in more than 7,000 Maldivians from the atolls and a total of more than 20,000 protesters onto the streets of Male in one massive show of strength on May Day. The Yameen government was clearly on the back foot, even admittedly nervous in private. The local police – who would crack down with uncommon vigor later in the night – were visibly wary, preferring to keep their distance.


The U.S. State Department had just days before urged the Maldivian government to credibly investigate the disappearance of Maldivian journalist Ahmed Rilwan, who was abducted in August 2014. Amnesty International in its report on the situation in Maldives described it as “rapidly deteriorating.”


A day before the May Day protest, the European Parliament passed a resolution asking member states to issue travel warnings to tourists about the deteriorating human rights situation in the Maldives.


All the little bits and pieces were coming together just right. And it showed as more than 20,000 people marched through the streets of Male, with the police unable to do little more than watch from the sidelines. Then suddenly, and quite inexplicably, the crowds were disbanded and asked to gather near the Islamic Centre near Republic Square – where a proposed sit-in would begin following a break in the protests. It is still unclear why this was done, as it gave the police the clear logistical upper-hand, effectively allowing them to square off and herd the protesters into smaller, more manageable groups as and when they gathered to continue the protest.


What was also inexplicable was the utter mish-mash of causes célèbres. While the public mood was unmistakably in favor of regime change, the Adhaalath Party and JP were focusing on the release of former Defence Minister Nazim and an end to the crackdown on JP leader Gasim. The MDP was clearly focusing on the release of Nasheed. Somewhere in the midst of this cacophony of intent was a group of people demanding a credible investigation into the disappearance of Maldivian journalist Ahmed Rilwan.


There is no doubt that the fierce crackdown on the May Day protesters has put the Yameen government in an advantageous position. Much was left to be desired at the end of the protest, with questions ranging from a lack of clarity of purpose, to an absence of leadership presence on the ground, even a lack of direction for continuing the protests despite many on the streets of Male wanting to carry the momentum forward.


Disparate agendas have weakened the opposition alliance, and within the MDP itself there are those who feel the need to go back to the drawing board.


Many of the 193 arrested during the May Day protest, including blogger Yameen Rasheed, are facing the threat of even more serious and far-reaching charges being leveled against them. Many of those who worked in various government departments and entities and who participated in the May Day protest have been sacked. Opposition leaders including Sheikh Imran and Ali Waheed are still in prison.


There is however, no mistaking the growing sense of unrest and anger among the people. The more the government cracks down, the more the wounds of the people fester.


It would seem as if Yameen is sitting steady. Scratch the surface though, and cracks and fissures begin to appear. There is growing unease within the PPM itself over the meteoric and “uncontrolled” rise of Tourism Minister Ahmed Adeeb, who represents a threat to many other leaders within his own party.


The whispers of the growing differences between former President Maumoon Abdul Gayoom and Yameen also refuse to die down. In the run-up to the May Day protest, Sheikh Imran of the Adhaalath Party openly appealed to Maumoon to intervene and end the deadlock. “His studied silence in the aftermath of this very open and obvious plea by Sheikh Imran is clear indication that he is not happy with the situation,” said Shidhaatha Shareef of the Adhaalath Party.


The fact that Maumoon’s son, Farish, had to face an unexpected challenge in the party primary for the Dhiggaru by-election sent tongues wagging across party lines in the Maldives. Member of Parliament and Majority Leader Ahmed Nihaan brushed such talk aside, terming it a “sign of democratic strength of the PPM and flourishing inner party democracy” that even Maumoon’s son would have to earn his position and seat. The fact that Moosa Naseer Ahmed, widely believed to have been propped up by “influential” leaders from within the PPM itself, is contesting Dhiggaru as an independent, has poured fuel on the fire. Adding to this is the overtly vocal denial by Yameen of a divide within the PPM over support for Farish. So much so, that the ageing former president is finding himself forced to actively campaign for his son, if only to ensure his electoral victory in the June 6 by-election.


Nasheed’s MDP has perhaps gained the most since the February 27 protest – both in terms of grassroots popularity as well as international support. MDP spokeswoman Shauna Aminath says the protests will continue and will only grow bigger and stronger: “The agenda is to show the people are not intimidated by the government. This is the beginning of revenge politics if President Yameen does not relent.”


Royden D’Souza is a journalist with more than 15 years experience in Indian newspapers and television news channels.