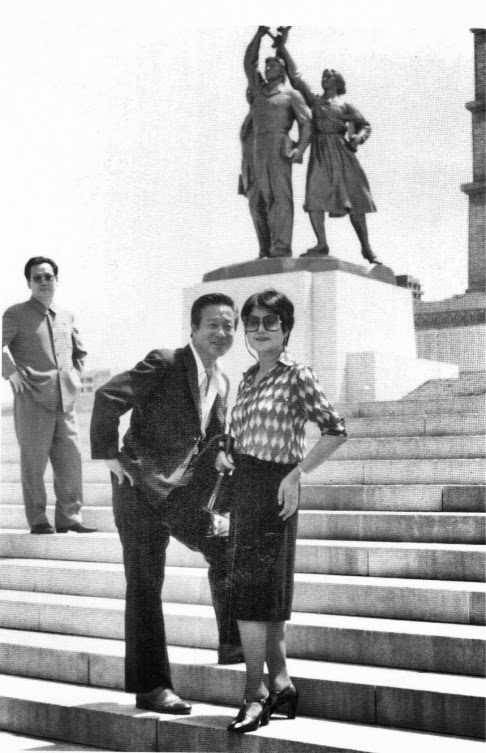 Shin and Choi in front of a monument in Pyongyang after they were captured, separately, in Hong Kong by North Korean agents.


A recent book tells the extraordinary story of the kidnapping in Repulse Bay, Hong Kong, of film star Choi Eun-hee and director Shin Sang-ok on the orders of North Korean dictator Kim Jong-il. In this excerpt, author Paul Fischer describes the lead-up to Choi's abduction


Before becoming a notorious dictator, Kim Jong-il ran North Korea's Ministry for Propaganda and its film studios. Acting as producer and screenwriter, he was behind every movie made in the country. 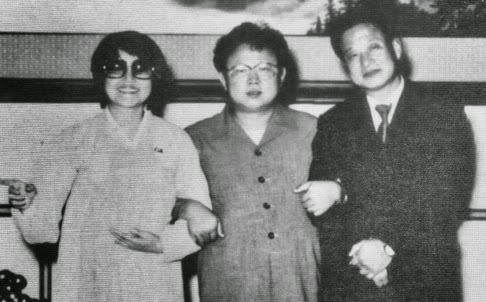 Unimpressed by the home-grown talent available to him, Kim decided to import some and, in July 1978, he ordered the kidnapping of South Korea's most famous actress, Choi Eun-hee, then 52, and her ex-husband, filmmaker Shin Sang-ok. The ex-couple, who had been partners in the Shin Film Company, were captured and did not escape the clutches of North Korea until 1986. On a trip to Vienna that year, they requested political asylum at the United States embassy.


Shin was kidnapped in Hong Kong's Repulse Bay. Choi's ordeal - as recounted in the recent book A Kim Jong-il Production: The Extraordinary True Story of a Kidnapped Filmmaker, His Star Actress, and a Young Dictator's Rise to Power, by Paul Fischer - had begun almost six months before, in the same seaside location.


The following is an edited extract from Fischer's book.


Choi Eun-hee stared into the rumbling ocean waters below and told herself to jump. The freighter groaned and vibrated under her feet as it plowed through the waves, spreading white foam on either side of the hull. Do it, Choi thought. Jump in and it will all be over.


Hesitating, she looked to the horizon. In the distance, Chinese fishing ships gently bobbed in the water, the smoke of their cooking fires rising thin and white against the blue sky. The freighter rushed past them and they were gone.


Madame Choi, we are now going to the bosom of General Kim Il-sung.


One of her kidnappers


Nearby on the deck, the ship's crew were laying out several different national flags, ready, she had been told by the men, "for when we need them".


Choi thought of her own family with anguish. She squeezed her fingers on the handrail, her knuckles turning white. She had to do it.


She pushed back on her heels and prepared to jump, but the guards spotted her. They ran to her, grabbed her arms, and pulled her back. She tried to fight them off, but it was no use.


As they dragged her back to her cabin, she silently cursed herself for not listening to Shin Sang-ok.

[THE YEARS AFTER Shin and Choi's separation] were a sad, difficult time. Choi didn't act in another film. She spent most of her time trying to save the Anyang performing school from being sucked into the vortex of Shin Film's bankruptcy. The school had 700 pupils and she felt responsible for every one of them. They had to be looked after.


In the fall of 1977, she was visited by a man calling himself Wang Dong-il, who told her he ran a film studio in Hong Kong. Wang had a similar performing academy at home, and he wondered if Choi might want to form an affiliation, and perhaps also run the Hong Kong school? He invited her to the Hong Kong Film Festival later that year to discuss the project further.


Choi was unable to travel to the festival, so regretfully turned down the invitation. Wang stayed in touch. One day he sent her a film script, asking her if she would direct it. The paycheck would be enough to save the Anyang school - for a while. Choi agreed to fly to Hong Kong and discuss the project.


Before she left she called Shin. They hadn't seen each other in weeks.


He had been flying back and forth to the United States and to Hong Kong, trying to find a way to restart his filmmaking career, so far without success. When she told him her news, he sounded uncertain.


"Isn't it weird for someone from Hong Kong to come and ask you to be a director, when they have so many famous directors and staff members at their disposal?" he asked. He couldn't find work: why had someone gone out of their way to hire Choi when she wasn't even a director? "And why do the Chinese want to be affiliated with an unestablished acting school such as Anyang?"


Shin "was always trying to look out for me", Choi later said, but she wondered if she heard some resentment and jealousy in his voice. She ignored him. She would prove to him that she could do fine without him.


As the chauffeur-driven car sped smoothly through the brand-new underwater tunnel linking Kowloon to the island of Hong Kong, Choi apologised to Wang Dong-il for being unable to accept his invitation sooner, and for only being able to stay a few days.


The car emerged back into the orange evening light, and straight into a canyon of skyscrapers. Hong Kong, then still under British rule, was experiencing dramatic changes as it reinvented itself, moving away from a manufacturing economy to become one of the world's leading financial centres. The skyline bristled with cranes as a result of the Ten-Year Housing Program started in 1972 to provide quality housing for nearly two million people. Supermarkets and corporations were replacing mom-and-pop stores and local businesses. Banks and brokerage houses blossomed, and nearly half a million Hong Kong citizens were becoming stock investors.


Wang dropped Choi off at the Parma Hotel [ South China Morning Post reports from the time suggest it was actually the Furama hotel, in Central], where a room had been reserved for her on the sixth floor, with a stunning view of Victoria Harbour. They would meet again the next morning, he told her, at 10am, sharp.


For the next two days Wang showed her the city, wining and dining her at the best restaurants. For all the luxurious hospitality, Choi was frustrated by the lack of business talk - and made uneasy by two Chinese-looking men she noticed following her, taking pictures as she explored the city.


On the third day, Wang was nowhere to be found, so Choi went to the local Shin Film office, which was still open, waiting for Shin Sang-ok's future to be decided. [Shin had fallen foul of South Korea's repressive government and General Park Chung-hee eventually closed his studio.] The Hong Kong company director, Mrs Lee Young-seng, and the manager, Kim Kyu-hwa, awaited her, along with a woman in her early 50s and a cute little girl of about 12 years of age. Kim introduced the woman as an old friend of his, and the girl as her daughter.


"Hello, I am Lee Sang-hee," the mother said, greeting Choi.


That night at dinner, Mrs Lee and Choi bonded, Mrs Lee telling Choi that she was a huge fan and had seen all her movies. Mrs Lee offered for her and her daughter to spend the next day with Choi while she waited for Wang - who, she had been told, was unexpectedly detained, but would be able to resume and conclude talks with her shortly - and Choi accepted.


The next day, January 14, Choi met with Mrs Lee and her daughter. Mrs Lee seemed overexcited. "She talked nonstop," Choi said. "She wanted to introduce me to her many acquaintances in Japan, especially an older man who was interested in culture and art. He would be useful in the management of my school, she thought."


Halfway through lunch at a Japanese restaurant, Mrs Lee excused herself to make a phone call, and when she returned told Choi she had just spoken to one of those influential acquaintances. Would she like to meet him today? Choi, who had no prior engagements, agreed. Her friend, Mrs Lee told her, lived about an hour's drive away, in a house on Repulse Bay..


Repulse Bay, on the far southern side of Hong Kong, had been used in the 19th century as a base by pirates, who preyed on the British merchant ships on their way to trade with Japan. The pirates had long ago been repulsed - hence the bay's name - and the strip of land turned into tourist beaches.


Choi looked out the window as their taxi drove down the deserted road. It was 4pm, in winter, and the air coming off the sea was cool. She could see houses in the near distance, villas and vacation homes, the nearby beach empty of people. She had no idea where they were.


Suddenly Mrs Lee asked the taxi to stop beside a small strip of beach.


"Should we ask the taxi to wait?" Choi asked.


"We can phone for one and it'll come right away."


Mrs Lee got out of the car, Choi and the little girl following. The woman stood and looked around.


Choi asked what was going on but got no answer. Mrs Lee seemed to be waiting for someone. After a minute, Choi and the young girl wandered toward the sea. It was late afternoon and their shadows were stretching across the sand.


Mrs Lee's voice rang out, calling for them. Choi turned around and saw her standing by the waves about 40 yards away, motioning Choi to come over. There was a group of long-haired men by her side. A small white motor skiff bobbed in the water, with more young men, all with long hair, sitting inside it, looking in her direction. Uneasily Choi walked over. Mrs Lee explained that the man they were meeting had sent the men to take them to his secluded villa, 10 minutes away across the bay. Choi hesitated.


The little 12-year-old girl seemed happy enough, surely a good sign, but Choi wasn't comfortable. She didn't know where she was. She had only met this woman the day before. A queasy uneasiness twisted her stomach. She had been in enough bad situations to recognise that this was another.


"I have a six o'clock dinner engagement …" she said.


"Don't worry, don't worry," Mrs Lee said, in the same agitated tone she'd had all day. "It only takes 10 minutes to get to the villa. You will have plenty of time to get to your engagement."


Choi was about to reply when the men in the motorboat nodded at one another, leaped out, and grabbed her. She tried to fight, but they overpowered her and threw her into the boat. Directed to follow, Mrs Lee and her daughter climbed in as well. The skiff 's motor rumbled to life. Choi was terrified. I am being robbed, she thought. The boat turned and headed away from the bay - toward the open sea. Choi turned to Mrs Lee, but she looked serene. She put a cigarette between her lips and offered Choi one.


"Everything is all right," she said.


One of the long-haired men called Choi's name. She turned to him. He was middle-aged, probably the oldest of the group.


Choi's heart sunk into her stomach. "Where is this boat going?" she asked in a weak voice.


"Madame Choi," he said solemnly, "we are now going to the bosom of General Kim Il-sung."


The man took the long-haired wig off. "I said, we are going to the bosom of the Great Leader, Comrade General Kim Il-sung."


Screaming, Choi jumped to her feet, and the boat rocked side to side. Hands reached up for her and pinned her back down onto her seat. Her vision blurred. Her body went limp, and she fainted.


She drifted in and out of darkness. She remembered feeling someone carrying her up a gangway, someone giving her an injection, then oblivion swallowing her back up. When she finally woke she was aboard a freighter, in the captain's cabin.


A large ceremonial portrait of Kim Il-sung smiled down at her.