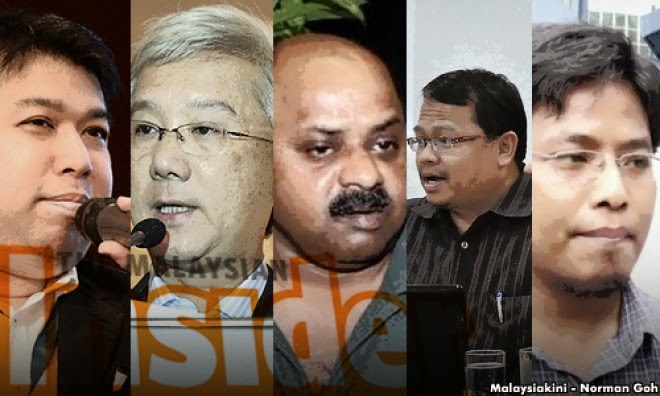 Five independent editors the latest to be hauled in


Malaysian authorities have upped their ante on the use of sedition laws, hauling in five editors in a deepening crackdown on dissent that critics say is aimed partly at shoring up Premier Najib Tun Razak’s standing inside his own political party.


The five are from The Malaysian Insider and The Edge Media Group, which owns the independent news portal, kicking off a storm of protest from press and human rights organizations that charge the arrests were aimed at silencing voices critical of the government and particularly its fiasco over its state-backed investment fund 1Malaysia Development Bhd,


The troubled fund has fallen deep into the red, requiring the government to supply a RM950 million standby credit facility and to engineer a US$2 billion loan from an UMNO crony. Fitch, the international rating service, has stated it could possibly issue a credit downgrade for the country’s entire banking system because of the danger that the debt, estimated at RM5 billion to the country’s banks, could end in default.


More than 100 people have been arrested in the past week, prompting an opposition senator, Ariffin Omar, to tell the opposition website Malaysiakini that the country could be headed for disintegration. The government, Ariffin said, “behaves as if it is a law unto itself. It has lost its credibility, and is not even able to control the police force, which is running wild. The police come under the control of the Home Ministry. The force cannot act on its own. The police are not supposed to be like the Gestapo during Hitler’s reign, which could do as it liked.”


The Kuala Lumpur-based Center for Independent Journalism and the Southeast Asia Press Alliance, among other organizations, called for the immediate release of Jahabar Sadiq, the chief executive editor of the Malaysian Insider, Ho Kay Tat, the publisher of the parent company Edge, and three editors from Malaysian Insider. They were expected to be detained at least overnight. Anyone found guilty under the country’s sedition act faces the possibility of five years in prison and a fine of RM5,000.


“Prime Minister Najib Tun Razak’s scandal-ridden government is under fire on various fronts and is resorting to outdated laws to suppress critical media coverage of its alleged mismanagement and abuse of power,” said Shawn Crispin, the Southeast Asia representative of the Committee to Protect Journalists. “Instead of threatening media critics with an outdated sedition law, Najib should be working to scrap the legislation as he vowed to do in mid-2012 but reneged on in November 2014 supposedly to ‘protect the sanctity of Islam.’ As long as the Sedition Act is on the books, Malaysia’s journalists will always work in fear of arbitrary arrest and politically charged criminal accusations.”


The arrests ostensibly stemmed from a March 25 report on the Insider website that the country’s nine sultans had voted to oppose the imposition of hudud, harsh Islamic law, in the eastern state of Kelantan. The Conference of Rulers denied the report, which was quoted at length in Asia Sentinel the next day. Government MPs demanded that police reports be filed against Insider.


Crispin and others charged that the government is using the seemingly incorrect report as a tool to get back at both Malaysian Insider and The Edge for critical reporting on the government. The Edge in particular has been at the lead with penetrating reports on the scandal surrounding 1MDB. The arrests of the five journalists are the latest in a deepening wave of sedition arrests that began in midyear 2014. Among those recently arrested were Rafizi Ramli, the secretary general of the opposition Parti Keadilan Rakyat, who was hauled in barefooted, handcuffed and wearing a purple jail jumpsuit, and Mohamad Sabu, the deputy president of Parti Islam se-Malaysia and the head of the party’s moderate wing, who was accosted in Penang as he got out of his car by 20 policemen wearing full uniforms and ski masks. Nurul Izzah Anwar, the daughter of the imprisoned opposition leader Anwar Ibrahim, was arrested in connection with a speech on the floor of parliament in which she criticized the arrest of her father. Eric Paulson, head of the human rights NGO Lawyers for Liberty was arrested on March 23. Asia Sentinel