The Bloodstained Trail of The Philippines' Abu Sayyaf

The Abu Sayyaf, who released two German hostages Friday after six months in captivity, is an Al-Qaeda-linked Islamic militant group blamed for the deadliest terror attacks in the Philippines.

The following timeline traces the bloodstained trail of the group in its bid to impose a strict brand of Islam to the mainly Catholic Philippines: 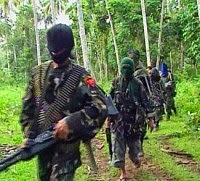 -- December 18, 1998: Janjalani is killed in a clash with security forces on the island of Basilan and is replaced by younger brother, Khadaffy Janjalani.

The Western hostages were freed in August 2001 and flown to Tripoli aboard a special jet sent by Libyan leader Moamer Kadhafi, who is said to have paid millions of dollars in ransom. The Asians were also freed.

-- May 27, 2001: The Abu Sayyaf raids a western Philippine island resort and take 20 hostages, including an American Christian missionary couple and American tourist Guillermo Sobero, who the gunmen later said they beheaded on June 11, 2001.

The Philippine military recovered Sobero's remains from a shallow grave on October 6, 2001, and US forensics experts later confirmed his death.

Missionary Martin Burnham was killed in a military operation that rescued his wife Gracia Burnham on June 7, 2002.

-- October 2, 2002: A US military adviser helping train Filipino counter-terrorism troops is killed along with two Filipinos in an Abu Sayyaf bombing near a military camp on the outskirts of the southern port of Zamboanga.

-- February 27, 2004: The Abu Sayyaf firebombs a ferry on Manila Bay, killing 116 people in an attack described by Filipino authorities as the country's worst terror incident.

-- June 27, 2007: The Philippine military says the Abu Sayyaf has elected Yasser Igasan as its new leader.

-- July 10, 2007: The Abu Sayyaf and fighters from the mainstream guerrilla group Moro Islamic Liberation Front kill 14 Marines on the island of Basilan, beheading 10 of them.

-- September 30, 2009: Two American military advisers and a Filipino Marine are killed in an Abu Sayyaf bombing on Jolo island.

-- December 5, 2011: The Abu Sayyaf abducts Australian Warren Rodwell, a former soldier, at his southern Philippines home. He is freed unharmed on March 23, 2013 after a reported ransom of nearly $100,000 is paid.

-- February 1, 2012: Two European bird watchers are abducted in the Tawi-Tawi island group and later turned over to the Abu Sayyaf on Jolo.

-- July 2014: Senior Abu Sayyaf leader Isnilon Hapilon, who carries an $5 million bounty on his head by the US government, appears in YouTube video with armed followers to pledge allegiance to Islamic State jihadists fighting in Iraq and Syria.

-- September 23, 2014: The Abu Sayyaf announces it is holding the two Germans. It threatens to behead one of the two hostages unless $5.6 million ransom is paid and Germany end its support to the US-led campaign against jihadists in Iraq and Syria.

Both the Philippines and Germany reject the demands.

-- October 2, 2014: The Abu Sayyaf warns it will kill one of its German hostages on October 17 unless its demands are met.

-- October 17, 2014: The German couple are released and escorted by civilians to a Jolo military camp hours after the deadline runs out.

The military dismisses as "propaganda" the kidnappers' claim they had collected the entire amount they had sought in ransom. Agence France Presse
Posted by Kerry B. Collison at 1:58 PM