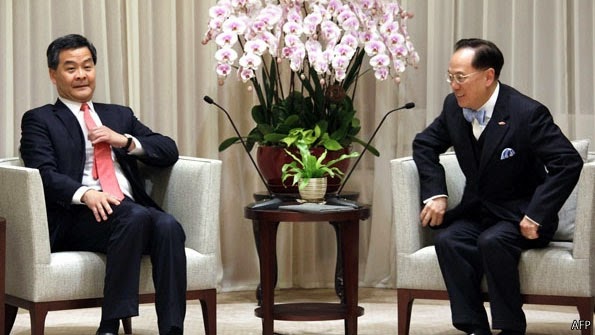 The man whose face has been the target for Hong Kong student protesters, secretly pocketed millions in fees from an Australian company. So, who is China's chief executive CY Leung?


The arrangement is outlined in a secret contract dated December 2, 2011, before he was elected chief executive, in which Australian engineering company UGL agreed to pay the Beijing-backed politician £4 million (more than $A7 million).


The payments were made in two instalments, in 2012 and 2013,  after he became Hong Kong's top official. 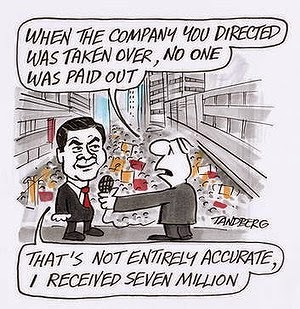 
The payments relate to a deal in which UGL bought an insolvent 200-year old British property services firm he was associated with called DTZ Holdings, whose prospects depended on Mr Leung's network of managers and clients in Hong Kong and mainland China.


Mr Leung, who is currently battling unprecedented pro-democracy protests, strenuously defended his judgment to not declare the payments on his register of  personal interests, when Fairfax brought them to his attention. 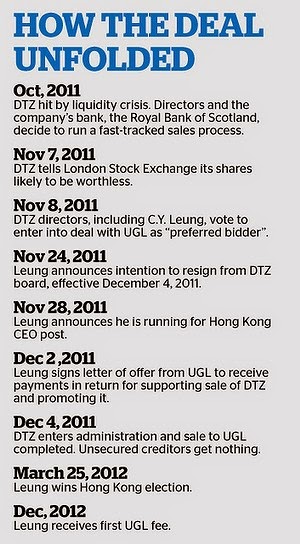 The sale left Mr Leung with a secretive financial windfall – including an additional guarantee that UGL would pay to him an outstanding £1.5 million bonus owed by the insolvent firm – but left DTZ's other shareholders and unsecured creditors with nothing, wiping out investments and debts worth tens of millions of dollars.


Mr Leung's side deal equated to more than 5 per cent of the purchase price.

A statement from his office said the payments related to past, not future, service and they were agreed at a time when he held no official position and before he was elected chief executive.


"The payments therefore arise from Mr Leung's resignation from DTZ, not any future service to be provided by him," said Mr Leung's spokesman, Michael Yu.


"Both the resignation from DTZ and conclusion of the agreement with UGL took place before Mr Leung was elected as the chief executive," he said. "There is no requirement under our current systems of declaration for Mr Leung to declare the above."


Mr Leung's statement added that he had stepped down as a member of Hong Kong's executive council on October 3, 2011, prior to DTZ's sale to UGL, Mr Leung was a director of DTZ and chairman of its Asia-Pacific operations when he and fellow board members decided to appoint administrators to sell the company's assets to UGL for £76 million.

He announced his resignation from DTZ on November 24, formally confirmed his candidature for the role of Hong Kong chief executive on November 27 and signed the lucrative contract on December 2, 2011.


The arrangement raises transparency questions for Mr Leung and also the Australian purchasing company, which is in the process of selling the DTZ business on to a US private equity firm, TPG.


The letter from Leupen to CY Leung.


DTZ's administrators, Ernst & Young, and its chairman at the time of its sale to UGL, Tim Melville Ross, said they were not aware of the Hong Kong politician's agreement with the Australian company.


The terms are set out under a cover letter from UGL's chief executive, Richard Leupen.


"It has been a pleasure getting to know you during this time and I look forward to continuing our relationship into the future," wrote Mr Leupen. "Your achievements in Hong Kong and China have been outstanding."


An attached schedule shows Mr Leung agreed to ensure that nominated members of his Asian management team remained in place and also that he would "provide such assistance in the promotion of the UGL Group and the DTZ group as UGL may reasonably require".


He also agreed to not to compete with UGL and to act as "a referee and advisor from time to time", adding in a handwritten note that his support was on the condition it "does not create any conflict of interest".


The wording appears to clash with Mr Leung's statement that the payments only related to past dealings.


The terms also contrast with DTZ's 2011 annual report, which states that Mr Leung was not to receive any payments beyond those statutorily required if his employment ceased due to a change of ownership.


In detailed answers to questions, the Australian company UGL underscored Mr Leung's immense importance to the Chinese operations of the company they were purchasing.


Crucially, UGL said the payment agreement was made not in hope of soliciting favours for the business but out of fear that he could destroy it.


"It was entered into solely to ensure CY Leung did not move to a competitor or set up or promote any business in competition with DTZ, or poach any people from DTZ, and hence to ensure the business retained its value after the UGL acquisition," said UGL.


"The China/HK business was critical to UGL's assessment of DTZ's value at the time of the acquisition," it said.


"It is standard business practice to pay for such undertakings, as you are requiring the individual to take on obligations and to forgo future opportunities."


UGL said the documentation did not include a clause to invalidate Mr Leung's payment in the event that he succeeded in his bid for office because management did not think that he would win.


"At the time of the negotiations, media coverage suggested that other candidates were favoured to be elected, so the possibility of CY Leung securing office was not the focus of UGL's negotiations," said UGL.


These questions extend to whether Mr Leung or UGL disclosed the proposed payments to DTZ's UK administrators or directors at the time the administrators and DTZ board agreed to the beleaguered company's rapid sale.


Such questions have come at an awkward time for Mr Leung, who is battling to assuage tens of thousands of students and supporters who have paralysed much of the city's central business district over the past ten days, calling for his resignation.


The protesters accuse Mr Leung of working for Beijing, at the expense of Hong Kong's promised democracy and autonomy, and failing to defend the institutions that underpin one of the world's most vibrant and successful cities.


Both sides have retreated from earlier positions and protest numbers have thinned ahead of anticipated negotiations.


UGL, the Australian firm, conceded that Mr Leung's multimillion-dollar payment deal was not disclosed in any public document but said there was no duty otherwise.


It said the main creditor, Royal Bank of Scotland, was aware of the payment and deducted the amount from the DTZ purchase price.


"This was a matter for the seller, as it was a necessary payment for the protection of the value of the business," said UGL. "The acquisition would not have proceeded if this value was not protected and assured."


DTZ's administrator, Ernst and Young, said in a statement it did not know about the arrangement.


"The Administrators have no detailed knowledge of any specific arrangements made between UGL and any other party."


The former chairman of DTZ, Tim Melville Ross, also said he was unaware of the deal between Mr Leung and UGL..


"If there were any discussions between Mr Leung and UGL, these were quite separate from the negotiations between DTZ and UGL," he said.


Mr Tiffen said: "Whenever you are offering financial benefits to public officials or directors of a company, dealings must be transparent. Without transparency, people's conduct is brought into question."


Read more: http://www.smh.com.au/business/world-business/hong-kong-chief-executive-cy-leung-faces-questions-over-secret-7m-payout-from-australian-firm-20141008-1134yv.html#ixzz3FaiUOZ5O
Posted by Kerry B. Collison at 3:46 PM