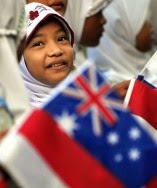 The Asianization of Australia? (Parts 2 & 3 of 3 )
There has, then, been an Asianization of Australia, and it has been part of multiculturalism’s emphatic success. Even so, an honest appraisal would say that the cultural impact of Asian immigrants on Australian national identity remains open to debate. I say this not because there has been a negligible impact, but because the impact may not yet be fully known. It may take more than a few generations to gauge the cultural effects some groups have on a prevailing national identity.

To be sure, there was a significant presence of Asian people — primarily Chinese — in Australian history. We can trace this to the gold rushes of the 19th century.

Yet apart from the legacy of phrases such as “Fair dinkum” — which some believe originated from Chinese miners on the goldfields — there is little that has been carried over from the early colonial days. Perhaps the greatest cultural impact of Asians in Australian history has been their exclusion. Anxieties about yellow hordes played a crucial, if not decisive, role in the development of what came to be known as the White Australia policy.

Even with all that has happened since the 1970s, it would be premature to proclaim that waves of Asian immigration have seen a comprehensive Asianization of Australia. Asianization seems a misnomer if we are merely referring to something like 10 percent of the population.

Here, the very reason behind Australian multiculturalism’s success may also explain the limited nature of any Asianization of Australia. Being defined by citizenship, a nation-building multiculturalism is premised on certain values and institutions being protected from political contest.

Those who arrive as immigrants may have the right to express their cultural identities, but there is no right to repudiate, say, a commitment to parliamentary democracy. This may ensure that Australian society is highly adept at absorbing cultural difference.

But it also restricts the ways in which new arrivals may be able to shape or transform the countries in which they settle.

Australia’s immigration experience is marked by remarkable social mobility. The children of Australians of migrant background outperform the children of native-born Australians when it comes to educational attainment and employment. If in doubt, you need only look at the undergraduate faces of those who are enrolled in the faculties of our prestigious universities.

All this is grist to the mill for our self-image of egalitarian meritocracy. Progress, though, is never
complete. Our achievement is not quite perfect.

Because while Australia does extremely well in social mobility for immigrants, including those from Asia, equality of opportunity isn’t enjoyed in all spheres. We may boast about education and employment, but our efforts in opening the doors of power to all who knock are more questionable.

Our cultural diversity is far from proportionately represented in positions of leadership.

For example, in the current Federal Parliament, there are only a handful of MPs and senators who have non-European ancestry. There are only two Aboriginal people in the Parliament: Ken Wyatt (the Member for Hasluck) and Nova Peris (Senator for the NT). To my count, there are only four who have Asian cultural origin: Senators Penny Wong, Lisa Singh and Dio Wang, and Ian Goodenough (the Member for Moore). In percentage terms, only 1.7 percent of those who sit in the Federal Parliament bear an Asian cultural background.

The private sector doesn’t fare much better. Last year Diversity Council Australia studied the cultural origins of Australia’s business leaders. They found a very low representation of leaders with an Asian background. Compared to 9.6 percent of the Australian community with an Asian background — based on a methodology using names — only 1.9 percent of executive managers and 4.2 percent of directors have Asian cultural origins.

To be fair, the issue of representation and power isn’t confined to Australians of Asian background.

Turning specifically to those of Asian backgrounds, however, there is a question to be asked. Is there a bamboo ceiling that exists in the same way that a glass ceiling exists for women?

A charitable view would be that any under-representation of Asian backgrounds in leadership positions simply reflects a time lag. Diverse leaders are still in the “pipeline”. We should be confident that time will take care of the issue.

Then again, people were saying that 10 or 20 years ago. If we were to adopt a more critical view, we could ask whether unconscious bias is contributing to the pattern of representation. The poor level of Asian Australians in leadership positions appears to replicate a pattern of invisibility that exists within Australian culture.

Such invisibility may point to some persistent cultural assumptions and stereotypes about people of Asian background. In particular the apparently positive “model minority” stereotype of Asians — that of law-abiding, hard-working and studious Asians — can disguise a more negative stereotype. Those seemingly laudable qualities of being inoffensive, diligent and prodigious can sound a bit like the qualities of passivity, acquiescence and subservience. These are the sort of qualities that map nicely on to the state of invisibility.

There is one thing that we must avoid. We must avoid the creation of a new class: a class of professional Asian-Australian coolies in the 21st century. A class of well-educated, ostensibly over-achieving Asian-Australians, who may nonetheless be permanently locked out from the ranks of their society’s leadership.


The Asianization of Australia?
(Part 3 of 3)


Much has been said in recent years about the Asian Century, of Australia being poised to prosper from Asia. Our geography has divined our twenty-first century destiny. As economist Tim Harcourt has put it, the tyranny of distance has given way to the power of proximity.

Yet there are three things on this that stand out for attention. It is on these issues that I will conclude my remarks. Each highlights some of the challenges that remain in Australia’s engagement with Asia.

The first has to do with the language in which we speak about Asia. I use language here in more than one sense.

As many others have pointed out, Australia’s Asia literacy remains alarmingly underdeveloped, at least for a country that likes to think of itself as proximate to Asia. While it is true that more than 1 million Australians speak an Asian language, it is sometimes assumed that the task of engaging with the region can somehow be outsourced to those Australians of Asian cultural background.

The thinking runs thus: Why should we or our children bother with mastering an Asian language, difficult as they are to master when starting with an Anglo tongue, when Australia will continue to take in immigrants from China, India and elsewhere in the region?

This goes to another aspect of our language concerning Asia that is a problem. Part of the reason, I believe, for our lack of Asia literacy is that our framing of regional engagement is so nakedly mercantilist. Where once Australians may have spoken in hysterical terms about the teeming yellow hordes, we now endlessly marvel at the billions-strong middle class emerging in Asia.

People talk about how we can maximize the “rent” from our relationships with the region, of how we can “capitalize” on Asian growth. I have no doubt some of this has to do with the triumph of economism in our society at large, but some of it also has to do with the instrumental mindset we have taken towards Asia. We should not be surprised if we have failed in the area of Asia literacy. Cultural engagement can’t be sustained by economic ambition by alone.

The second issue arises from this. If Australia is to embrace its Asianization, it must be thoroughly cultural in nature. We must be willing not just to see Asian neighbors as economic partners, but also be open to learning from them. Is there not something that we can learn from young emerging democracies? From societies that have had to develop cities and infrastructure to sustain much larger populations? Is there something in Confucian practices from which we can borrow or learn in dealing with our ageing population? Could there not be aspects of Asian practices of communal obligation or responsibility that may give us a new perspective on so-called Australian values, such as mateship and egalitarianism?

The third point concerns expectations. As I said earlier, it seems as though each generation of Australians believes they have discovered Asia for the first time.

This sense of discovery can lead to a lack of proportion when it comes to sizing up Australia’s role in the region. For a country of some 23 million, living beside countries much larger in population, and whose economies may develop with enormous speed, we may need to be fully aware of the limits of our power and influence.

As former prime minister Paul Keating has noted, it may be time for us to recognize that our old sphere of influence — the dominant Anglosphere of the post-World War II period — is diminishing. The world has changed.

According to Keating, “we have to be propelled not by regard of withering associations but by our enlightened sense of self”.

The place where Australia can be most effective and make the greatest difference is in southeast Asia — namely, the wider ASEAN. This, Keating says, “is the natural place for Australia to belong; indeed, the one to which we should attribute primacy”.

All this confirms that the reality of Asia today is much different. Its exponential progress may just catch many by surprise — no matter how much we tell ourselves that we are ready. But none of this is separate from the internal or domestic task that we have in coming to grips with Asianization.

How we handle the task of multiculturalism within our borders, how we manage the various contests around race and national identity, will go a long way to determining whether we will be a success as a nation in a century that will see Asia ascendant.


This 3 part article is condensed from a keynote speech delivered at the Annual Conference of the Asian Studies Association of Australia held recently in Perth, Western Australia. The writer is the Race Discrimination Commissioner