Don't be fooled by 'Thai-style democracy' 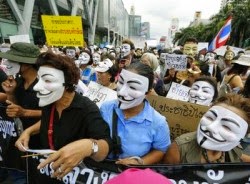 The rights of the individual must be respected in every society, whether in Asia or the West


Contrary to opinions being voiced in Thailand, democracy has not been patented by the West. Our intellectual elite should stop spreading the false idea that "Western-style democracy" does not fit Thai society.

It might be true that popular perceptions of the nature of power and power arrangements are different in the East. But such perceptions should not be seized upon by the Thai elite to legitimise their claim to power.

Philosophers have analysed the nature of power in Western society as founded on principles of individual autonomy and identity, while power in the Eastern world is something that tends to transcend the individual. In simple terms, Western culture emphasises individuality, while its Eastern counterparts lean more towards a communitarian ethos.

Western individualism is reflected governance that is "people-centred" while the East's communitarianism has systems of governance more closely modelled on the family. In theory, governments in the West have an obligation to deliver benefits to the individuals who vote them in. Governments in the Eastern world, though, tend to more like paternalistic families, with each individual member subordinate to a single head. As a result, governance in the West is usually more accountable, politics in the East more opaque.

Over time the trend in the West has been toward democracy and respect for the rights of the individual, while we in the East seemed to have ended up with greater authoritarianism.

But this is neither an inevitable nor the final destiny. Asian perceptions about power, government and the state have developed and changed through war, colonisation and education. Individuals in Eastern societies have been enjoying or fighting for full autonomy and power for hundreds of years. In recent years we have seen popular uprisings across the hemisphere as people demand a greater say in the governance of their countries.

Many of the elite in Thailand were educated in the West and equipped with theories of democracy that emphasise the power of the individual. Yet they insist on telling their countrymen that what they learned in Western schools and universities does not fit our society because emphasising the rights of the individual challenges the status quo.

However, history has already judged that individuals have the right to rule themselves. Any form of governance is simply an arrangement to share power among individuals. And each individual is equal, none better than the other. Government and other political institutions are simply forums by which individuals and groups of individuals negotiate their power and interests. No one has the right to rule over the other. Government, in any form, is obligated to deliver services and benefits to the people, not to dictate to the people.

In the Thai context, individuals have risen up periodically through history to demand their rights. The struggles in 1932 to turn the country into a democracy and the uprisings in 1973 and 1992 are all clear evidence that Thais will exercise their power in the cause of democracy to topple autocrats and dictators. Ordinary citizens realised long ago that they are crucial part of the state and its construction.

Historically, the elite and the military have jealously guarded the notion that they are superior to the common people. They have insisted that democracy merely delivers bad politicians to parliament, but they never realised that people often consider them politicians too, and little better than their elected counterparts.

Thailand is in the midst of a reform process, which the military junta and the elite have guaranteed will bring us "perfect" democracy. But if democracy is to have any meaning, the power, authority and interests of the individual citizen must be taken into account. The rights of the individual must be respected in every society, whether in Asia or the West. The Nation, Bangkok
Posted by Kerry B. Collison at 4:38 PM