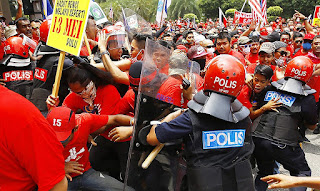 Mahathir on the divisions tearing a country, the opposition and politics apart.


“Because of Najib and his attempt to retain his position as Prime Minister, it becomes difficult for any kind of real dialogue or reforms to be carried out.” 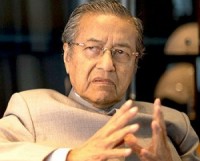 Since this interview, negotiations to create a new opposition front in Malaysia have been in full swing. Party leaders have spent the last three weeks issuing statements on policy issues that will determine their chances of success at the next election, slated for 2018.


One key issue is social cohesion in a nation wearied by toxic debates around race and religion.


These debates consistently block prospects for public reconciliation, leaving the responsibility for convivial social relationships to be carried by private citizens and civil society. They have also proven impossible for successive opposition fronts to manage, and each one has allowed itself to be torn apart after every election loss.


One of many public spectacles produced by Malaysia’s race and religion debates—and the high/low scandal cycle of provocation, followed by pacification, that they seem to generate—came in September 2015. This was the “redshirt” rally in Kuala Lumpur’s Petaling Street—an area known for its market run by ethnic Chinese traders—which was shut down by armed police before an American/Australian terror alert, and a remarkable intervention by China’s foreign minister.


“I have always said that in this country there must be a kongsi—a sharing—between the Malays, the Chinese and the Indians. That is the only way,” said Mahathir.


“If there’s any particular race wanting to dominate, it is only likely to fail. You can’t form a government when you’re thinking only of your own race. I led five elections, and all of them I won with a two-thirds majority. Now that can only happen with all the races—if only the Malays support me then I cannot get the two-thirds.”


Yet how to secure support from all the “races”—and discussions of religion in Malaysia are usually organised so their categories function as ciphers for “race”—is precisely the dilemma still facing the opposition front, which will likely include the new party which Mahathir is now set to form.


Their capacity for genuine interracial solidarity aside, each party that wishes to compete at the polls with Barisan Nasional is acutely aware of the electoral calculations that drive them towards cooperation. Yet, as Mahathir indicated, “today the opposition [parties] find it difficult to work with each other because of extremes of opinion.”


One opinion that wedges them every time is the desire for hudud penalties, purportedly for Muslims only, held by Islamist party PAS.


“Between the people there is not that much antagonism, and not that much friction,” said Mahathir.  “But then the extremists come in, and the extremists have a way of making it uncomfortable for people to go against them, so the impression gained is that there is extreme racial animosity or racialism in Malaysia.


“To a certain extent, I think that has increased over time, because they see a weak government and they think that they can make use of this government to extract the maximum.”


According to Mahathir, such exercises also elicit counter-claims that are themselves certain to lay the groundwork for the scandal cycle to repeat itself, because “people who say no to them would be regarded as not being very loyal to that race,” and “when one party turns extreme, the others will also turn extreme.”


Meanwhile, even as the scandal cycle moves from the provocation stage to the pacification stage, each time it is repeated the controversy fostered tends to enable UMNO and Barisan to scatter the opposition parties in disarray.


“Partly in order to gain support from Muslim people, UMNO has also gone to that [enabling a hudud debate]. They thought that if we support this, we would become more popular. So it has nothing to do with Islam, it’s just politics,” said Mahathir.  In Mahathir’s view, it was this calculation, and not straightforward religious piety, that also saw PAS leave the opposition coalition.


It is unsurprising that Mahathir would contest the religious credentials of Malaysia’s largest Islamist party, as well as UMNO’s new-found interest in “Malay unity” with PAS. One of his chief legacies as Prime Minister was the capacity for Barisan Nasional to win elections with a two-thirds majority—a feat of domination that it has not been able to perform since 2008.


It could only be repeated now if Barisan won back significant numbers of Chinese voters, or, more riskily, if it produced a majoritarian electoral bloc by making the very idea of Malay Muslim opposition politically unacceptable.


This is the context around Malaysia’s most recent scandal cycle, based on comments made by the Mufti of Pahang that the DAP and its allies were “kafir harbi” (hostile non-believers in a state of war against Islam). Shortly afterwards, Penang Chief Minister and DAP Secretary General Lim Guan Eng was dramatically arrested on charges of corruption related to a land rezoning decision.


Lim was quickly released on bail, after his arrest generated much discussion on why his purported corruption is being investigated while the federal government’s 1MDB scandal is not. After Lim’s release, the Pahang Mufti, along with various think tanks and the UMNO Youth, issued statements delimiting the notion of kafir harbi so that those so labelled should be resisted only with debate, and not with violence.


Meanwhile, an explosion at Movida, a suburban bar in Puchong, may or may not have been caused by ISIS. Matters have been confused by a series of contradictory statements issued by the authorities, fuelling some media suspicion about the true risk of terrorism in Malaysia.


In addition, a recent violent attack in Bangladesh may have been inspired by the teachings of controversial Indian Muslim televangelist Zakir Naik. Two of the perpetrators involved in the attack had studied in Malaysia, where Zakir Naik has been feted by the federal authorities.


Yet these important issues—which relate directly to public safety and confidence in these same authorities—have been obscured by the kafir harbi scandal cycle running in the foreground. The result to date is that the public political use of the term kafir harbi has effectively been sanctioned in Malaysia, albeit in a limited way. This development could influence the conduct of any new debate on hudud, and the next federal election along with it.


In this polarised political context, a number of opposition leaders, particularly in the People’s Justice Party and Amanah, have signalled their willingness to advance understandings of faith that might better support new, shared notions of citizenship. Their willingness to do so is supported by the electoral arithmetic. Indeed, developing a common position on social cohesion might prove essential to the opposition parties if they wish to create convincing new politics, not simply more new tactics.


Yet in today’s conditions, developing these politics would involve the various party leaderships entering in to negotiations with Mahathir, who still wishes to defend his contested legacy. It would also require some form of reconciliation with Anwar Ibrahim, whose role at present appears to consist of guiding discussions from his prison cell.


This task might be difficult, given the residual bitterness. Yet the political shortcuts taken to date have delivered only incoherence and inability to navigate the scandal cycle, every round of which seems only to disrupt and defer the creation of a credible opposition front.


Amrita Malhi is a Visiting Fellow in the ANU Coral Bell School of Asia Pacific Affairs.