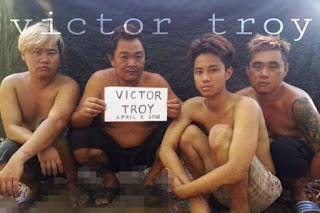 A picture of the four Malaysian hostages kidnapped by the Abu Sayyaf group posted on Facebook, presumably by the terrorist group themselves.(The Star/ANN/-)


The offensive, a first by Abu Sayyaf in recent years, led to clashes that started on Wednesday evening when at least 200 terrorists attacked the headquarters of the Army’s 18th Infantry Battalion (IB) here.


Authorities said there were brief respites from the clashes.


Terrorists, some of whom armed with .50 cal. machine guns, had positioned themselves on four hills surrounding the community of Punoh Butigan in the village of Sungkayot, where the 18th IB headquarters is located.