America’s Stateless Hmong -Caught in limbo, they can’t be deported but their status means no green cards 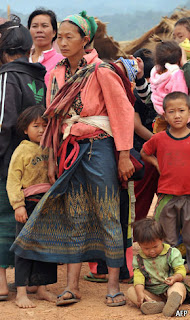 
Caught in limbo, they can’t be deported but their status means no green cards


They came to the United States in the 1970s and 1980s as child refugees, members of the Hmong minority in Laos fleeing that country’s new communist government and persecution for helping the CIA in its covert war in Southeast Asia, looking for the promise of safety and a piece of the American dream.

Many of them chased that dream in California’s Central Valley, slowly, sometimes painfully, building lives in a new country where their language and culture were virtually unknown. Largely from poor rural farming families, they often struggled to adjust to a dramatically different society, with few relevant skills and limited support.


But they went to school, got married, bought homes and had children. They built their new lives by working, finding jobs among the region’s casinos, farms and health care providers.


Some among them also broke the law, committing crimes that ranged from robbery to assault. Like others, they served their time or probation. But for some, the end of their time marked the beginning of a new ordeal. Since they were convicted of a felony, they lost their green cards, which signify not only their permanent resident status but their all-important license to live and work in the US.


They were caught in an unusual legal limbo, unlikely to be deported because the US and Laos don’t have a repatriation agreement, but also unable to fully participate in the economic life of the only country they had left. Today they feel shoved aside, a forgotten part of a community that was already largely invisible – the Hmong are one of the most isolated ethnic groups in the nation.


They are allowed to stay in the United States, but many feel like second-class citizens, says Dai Vang, 44, who lost his green card roughly 20 years ago after serving six years for robbery.


“Our green card is our freedom. We are still here. We are not illegal. But our rights were taken away from us,” Vang, whose name was changed because he remains concerned about his safety, said. “It is the grass we walk on. It is the air we breathe.”


Conviction of a felony not only cost them their green cards but violated US immigration law and drew the attention of US Immigration and Customs Enforcement (ICE). The agency detained them, sometimes for years, and legally confiscated their physical green cards.


These refugees have not made another mistake in the years or decades since their convictions, they say, adding that they have paid their price to society. Since they have not been deported they simply want a chance to support their families and contribute to society. Instead, they live in a permanent state of disruption, unclear of their status and future. Without a green card and with a felony conviction, they have struggled to work. Some have managed to navigate the system of one-year work permits, while others have remained jobless, and on the fringe.


Regardless of what they did five, 10 or 20 years ago, making it harder to work does not help them, their families, or their communities, said Anoop Prasad, an attorney in the Immigrant Rights Program at the Asian Americans Advancing Justice’s Asian Law Caucus in San Francisco.


“They are not going anywhere. Would you rather have them working? Or live on the margins?” Prasad said. “They are making it so difficult for these” people.


Their lives were already often difficult. The Hmong remain one of the poorest ethnic groups in the nation. In Asia, they often live in mountainous areas in China, Thailand, Vietnam, Myanmar and Laos. Often isolated by language and poverty, their voices are rarely heard beyond their communities in the U.S., according to Kao Kalia Yang, author of “The Latehomecomer: A Hmong Family Memoir.”


They are a largely forgotten legacy of US wars in Southeast Asia from 40 years ago, which sent them to a country where they have little leverage and power, Yang added.


“I don’t think we have been heard,” Yang said. “It is hard to just get to a place where others will listen.”


After arriving, many Hmong refugees had a hard time finding their place in their new country because they were placed in poor neighborhoods – at 31 percent, Fresno’s poverty rate is double the national rate – with failing schools, few jobs, and little cultural and mental health support, Prasad said.


Though the Central Valley is home to a well-known agricultural industry, parts of it rank as some of the poorest in the country.


In Fresno, Vang is among a handful of Hmong who shared their stories of losing green cards, though they say the issue extends deeper into their community. It’s a community they were sent back to without the ability to support themselves and their families, according to Lue Yang, executive director of the Fresno Center for New Americans.


Their struggles show a side of US immigration the public too rarely sees. Immigration is not always about undocumented or documented, borders and raids. It is also a system that cannot always react to the complexity of real lives, including ones disrupted by US foreign policy.


Their stories are echoed, in many ways, by those of refugees from Cambodia and Vietnam, and the flood of children who fled chaos and violence in Guatemala, El Salvador and Honduras in recent years.


The US immigration enforcement system may be designed to deal with drug and human smuggling, says Edgar Saldivar, a senior staff attorney at the ACLU of Texas, but not necessarily children escaping violence or Hmong refugees fleeing persecution.