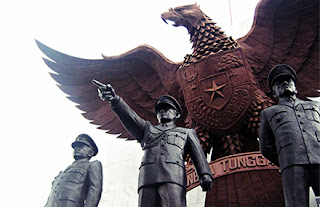 President Joko Widodo and first lady Iriana Joko Widodo during a visit to the Pancasila Sakti Monument in Lubang Buaya, East Jakarta, in this October 2015 file photo. The monument commemorates the victims of the 30 September incident, which sparked the 1965-66 anti-communist purge. (Antara Photo/M A


Recent attempts by intellectual progressives to elicit a formal apology from the government for the army-sponsored 1965-66 anti-communist purge, which saw roughly 500,000 people perish, have to a large extent been met with stringent opposition from conservative quarters, while anti-communist rallies, symposiums and even street banners proliferate.


As if to counter the stories of suffering by the survivors of the purge, testimonies to the atrocities allegedly committed by the Indonesian Communist Party (PKI) and its sympathizers have also emerged.


The absolute truth of what happened in 1965 may continue to be elusive for many decades to come, due to the complex historical circumstances of the period in question. However, thanks to the extensive research done by various academics and historians, it is at least possible to come to dispel certain myths surrounding it.

First, was the PKI a pacifist benevolent political force, as some left-leaning activists of today would have it be? In all fairness, no political force in 1960s Indonesia could be described as such. If anything, the scene was a ruthless Machiavellian power struggle: the opponents of the PKI proved it resoundingly by the bloodbath during the purge. But what about the PKI itself?


By 1965, the PKI had wittingly or unwittingly united most of its political opponents – the army, nationalists and political Islam − against it, except for President Soekarno. The collaboration of its enemies, a process that was more than a decade in the making, would eventually pave the way for its destruction. But how did this come about?


After suffering from an enormous setback following the 1948 Madiun Rebellion, the party had to build its strength anew. The stigma attached to the communists then was that they were not patriots, having sabotaged the independence efforts with a rebellion when national leaders like Soekarno and Hatta were engaged in difficult negotiations and an armed struggle with the Dutch.


A constant feature of Indonesian communism lay in its ideological exclusivity – where the ideological and intellectual tenets of Marxism were only fully understood by the PKI elite – never at the grassroots level. D.N. Aidit, the new chairman elected in 1951, realized that the socioeconomic settings in Indonesia then did not allow a strategy based on class struggle as in Russia or China.


As a result, the PKI was in no position to inspire the almost non-existent proletariat to an armed revolution. The 1950-51 suppression of trade unions by the government – when the workers failed to defend their arrested union leaders − further opened the eyes of the party leaders to the levels of class awareness in Indonesia.


The late Rex Mortimer, an eminent historian on communism and a lifelong member of the now defunct Communist Party of Australia, acknowledged that the class struggle in industrialized Europe, which inspired Karl Marx to write "Das Kapital," was alien to Indonesia's traditional social structure, especially in Java.


"Class formation and class differentiation along a property line of demarcation (or, in Marxist terminology, based on opposed relationships to the means of production) are a relatively recent development in Indonesia," he wrote in 1969. "In the absence of strong class pressures, political parties and mass-organizations organized their followings largely along lines of religious and cultural cleavage."


Hence, rather than transform Indonesia's sociopolitical landscape, the PKI had to adapt itself to the dichotomy between the santri (Muslim Indonesians favoring religious orthodoxy) and the abangan (cultural Muslims with syncretic religious practices harking back to the pre-Islamic era). Understandably, it was among the abangan that the party found most of its support.


Under Aidit's chairmanship, the PKI's strategy, according to Mortimer, were: " 1. The cultivation of the closest possible relations with the dominant anti-Islamic nationalist groups [in particular, the PNI and President Sukarno], 2. The accumulation of the largest possible membership and organized support, 3. According ideological primacy to symbols associated with nationalism and national unity."


Point one suggests that the PKI lacked a sensible strategy in dealing with political Islam in what was ultimately a Muslim-majority country. However, it worked for a while because the Nationalist Party of Indonesia (PNI) also had the most support among the abangan, particularly in the priyayi (bureaucrats and civil servants) class. Combined with point three, the strategy yielded dividends in the 1955 general election when the party came fourth after the PNI, the Masyumi Party and the Nadhatul Ulema Party (both Islamic parties).


Point three also drove the party into lending fervent support for President Sukarno's ultra-nationalist policies during the Guided Democracy period (1959-1966), such as the Confrontation with Malaysia, the Trikora Operation to seize West Papua and general anti-Western agitation.


Historian Frank Palmos, who was then dean of the Foreign Press Corps in Jakarta, related an incident in which he found his car daubed by PKI followers with the word "kabir" (Kapitalis Birokrat or Capitalist Bureaucrat) even when he was present at the party's headquarters at the invitation of PKI chairman Aidit to help translate his speech for the benefit of international guests.


Palmos also revealed the manipulative bend of the PKI elites. While he said he was on amiable terms with most of the party elite, he found the grassroots PKI supporters to be rabidly anti-Western and xenophobic, partly out of indoctrination. While translating for Aidit, for instance, he saw the PKI crowds below give him the cutthroat sign repeatedly.


Suffice to say, the power struggle between competing factions in 1960s Indonesia was fierce and often violent. To say that the PKI was innocent of such excesses is truly misleading. Like the other players in the game, the PKI used all the available means to strive for victory, and lost. And yet the mass murders against alleged communists and their sympathizers – which took place in the aftermath of the 30 September incident – were unjustifiable by any standard.