INDONESIA’S House of Representatives has ratified defense agreements between Indonesia and the governments of China and Germany, passing two bills into law 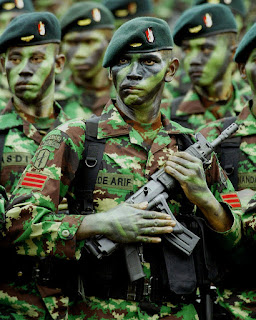 INDONESIA’S House of Representatives has ratified defense agreements between Indonesia and the governments of China and Germany, passing two bills into law


One of the new laws ratifies a defense agreement previously made between the administration of former president Susilo Bambang Yudhoyono and his Chinese counterpart in Beijing in November 2007. In December 2013, as a follow-up to the 2007 agreement, then defense minister Purnomo Yusgiantoro and Chinese Defense Minister Chang Wanquan met to discuss defense-related matters. The meeting concluded with an agreement that Indonesia and China would launch a joint special forces exercise and that China would help Indonesia to strengthen its defense capacity through a military technology transfer.


The other law ratified a memorandum of understanding (MoU) on Indonesia-Germany defense cooperation signed in Berlin by then deputy defense minister Sjafrie Sjamsoeddin and Germany’s then state secretary at the defense ministry, Rüdiger Wolf, in February 2012.The defense cooperation between Indonesia and Germany could include military training, research and development, disaster management, military logistics, healthcare and peacekeeping missions.


The ratification of the two defense agreements has prompted high hopes for Indonesia as they are expected to help improve the country’s military posture and strength.“With the approval of the two bills, there is henceforth legal protection for the defense cooperation between Indonesia and those two countries,” Defense Minister Ryamizad Ryacudu said at the plenary meeting. The two defense agreements, which are different in essence, are an answer to Indonesia’s dream of upgrading and modernizing its military strength.


While the defense agreement with China focuses on joint military exercises between Indonesia’s special forces and China’s equivalent, as well the latter’s offer to help Indonesia with a military modernization program, the agreement with Germany promotes military cooperation in general terms, affecting a wide ranging of joint activities.


All in all, the two recently signed defense agreements are in line with the government’s commitment to modernize the military. Such a commitment was previously made in June 2014, when then presidential candidate Joko “Jokowi” Widodo said during his election campaign that he aimed to triple Indonesia’s defense and security budget to improve the professionalism of the Indonesian Military (TNI) and the National Police.“If Indonesia’s economic growth stands at least at 7 percent, to improve our national security system, I aim to allocate up to 1.5 percent of GDP [gross domestic product] for defense,” Jokowi said at that time.


The two defense agreements complement each other in meeting Indonesia’s expectations for a modern military organization, especially suffering a prolonged military embargo from Western countries in the late 1990s until the early 2000s.However, the ratified defense agreements are not without risks, as the country has experienced in the past.One area of concern is the fact that such agreements are binding in nature. The question is whether there is still room for Indonesia to negotiate should the country need quality military equipment other than that offered by the two partner countries.


Such a question is associated with the consideration of the quality of the products on offer. It has become an open secret that there are just a few dozen military-equipment producing countries in the world, only a few of which produce sophisticated and top-quality products. The rest are producers of less sophisticated or less competitive military equipment.


Should the agreements turn out to be rigid, Indonesia would not have any other options aside from procuring equipment offered by China and Germany.


Another area of concern is the fact that military procurement is no different from common business deals practiced worldwide, where profits are always the main consideration. It remains to be seen whether the two ratified defense agreements are purely meant to help Indonesia modernize its military. Otherwise, it is likely that Indonesia would not be in a position to procure its equipment of choice.


A major concern is the fact that Indonesia had a bad experience in the past in regards to such military procurement policies. Although it was not a standalone factor, a shift in procurement policy cost Indonesia its unity and territorial integrity.


We could have been proud of our achievements as one of the military strengths in Asia in the 1960s, resulting from our shift in procurement policy. However, the impact was no less than devastating as Indonesia became economically indebted to the producing country and was pushed to the brink of bankruptcy.


Such a shift in procurement policy also triggered political disturbances in Indonesia. People may still remember the repeated separatist struggles in several parts of the country during the leadership of founding president Sukarno. It was apparent, as stipulated in international literature and the formerly classified documents of the CIA, that there had been foreign involvement in all those struggles.


Similarly, the repeated assassination attempts on president Sukarno were associated with foreign involvement in the planning, financing and execution of the attempts.


Perhaps it is advisable for the country — particularly policymakers and decisionmakers — to consider the noble principle of free and active foreign policy as outlined by the country’s founding vice president Mohammad Hatta.


Indeed, it is not perfect and to some extent it has been disliked by many countries. But it helped Indonesia to pass through the successive turbulent years
Posted by Kerry B. Collison at 12:42 PM