Political shenanigans in Mongolia-Steppe in an ugly direction 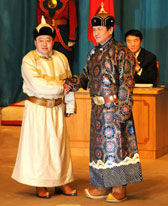 A former president is detained ahead of elections, threatening stability

POLITICS in Mongolia has been rough-and-tumble since 1990, when the country escaped Soviet domination to become a vibrant if imperfect democracy. But when scores of security forces raided the home of a former president, Nambariin Enkhbayar, and detained him over what officials call a serious case of corruption, politics took a new and ugly turn.

Police first confronted Mr Enkhbayar on April 12th as he returned to his home in the capital, Ulaanbaatar. Witnesses say police broke his car window and assaulted his government bodyguard, but Mr Enkhbayar managed to enter his house. Supporters rushed to the site, and police staked the place out before forcing their way in and taking him away early the next morning. Many watched this live on television.

The raid has aroused two reactions in the public. One is surprise at the high degree of force deployed in the raid and the low degree of decorum afforded to a former leader taken away barefoot and with a bag over his head. The other is the belief that the case has more to do with rabidly partisan politics than corruption. Most of Mongolia’s top officials, Mr Enkhbayar included, are widely thought to have enriched themselves through their power and their oversight of the country’s lucrative mining industry. Yet the vaguely described particulars of Mr Enkhbayar’s supposed crime—alleged irregularities in the privatisation of a small hotel and a local newspaper—strike many as unconvincing. Luvsandenvev Sumati of Sant Maral, a polling firm, says that if authorities were serious about fighting corruption, they would pursue bigger wrongs. The move against Mr Enkhbayar, he says, was both clumsy and politically motivated.

The timing is fraught. Parliamentary elections take place in late June. Last year Mr Enkhbayar left the parliament’s majority party, descendant of the former Communists, to form a splinter party of his own. His son, Batshugar Enkhbayar, says his father had already persuaded six or seven members of parliament to switch.

Mr Enkhbayar senior has also earned the enmity of President Tsakhiagiin Elbegdorj of the Democratic Party and the first president who was not once a Communist. On the day of the raid, Mr Enkhbayar had released internal government documents finding Mr Elbegdorj responsible for inciting deadly violence that erupted after the last parliamentary elections, in 2008.

The timing is poor for other reasons, too. After huge foreign investment in mining, government revenues are set to bulge. It presents the government with both the opportunity to deal with inequality and poverty, and the task of avoiding the “resource curse” that has afflicted other developing countries. Investors and the IMF had seen Mongolia as a darling among emerging markets. That image suddenly looks fragile. The Economist