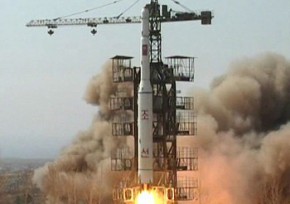 The lesson for the West: Don’t believe anything Pyonyang says

Every three years, a new test for the world seems to arise on the Korean peninsula. After nuclear adventures in October 2006 and May 2009, North Korea attempted to shake the world again by attempting to launch, on April 13, what officials described as a satellite, Unha (Milky Way)-3.

A few hours after the liftoff, North Korea officially acknowledged that the three-stage rocket had failed to enter orbit, an announcement very unusual for the regime, given that it continues to boast to its people that a rocket launched in 2009, which also failed, is still in orbit. The failure of the current botched launch raises the possibility of massive bloody purges of ‘reactionary elements’ inside the North Korean government.’ Seoul’s history indicates that maintaining control requires firm action and sometimes ferocious revenge killings at home and provocations abroad.

In truth, the rocket launch, like the famed annual Grand Mass Gymnastics and Artistic Performance Arirang held on May in the North’s capital, Pyongyang, was the usual performance designed to grip foreign media attention, which it did despite earlier White House urgings to ignore the propaganda.

The theatre didn’t come off quite as planned. The rocket broke up and crashed in the Yellow Sea, but it was up long enough for satellite images to show the rocket was more related to military usage than as a weather and agricultural survey vehicle.

Peter Lavoy, the acting US Assistant Secretary of Defense for Asia and Pacific Security Affairs, told the US House of Representatives’ Armed Services Committee that the “planned launch is highly provocative because it manifests North Korea's desire to test and expand its long-range missile capability."

North Korea had to have known that the west, and even China, would find the launch provocative. Indeed, given that the North’s two previous launches were automatically followed by respective nuclear tests, it’s safe to assume that the regime will likely carry out a third nuclear test in due course despite shopworn and useless United Nations warnings not to conduct weapons tests, as pouring water into a cracked pot is worthless. The lead time of the third nuclear test will be far shorter than people expect.

I find some Korea watchers naïve or ignorant in their assertions that US President Barack Obama should send a leading American political figure as an envoy to North Korea, “to discuss how better relations can be established between North Korea and the United States.” They are fabulists trying to see the world through the eyes of North Korean regime’s shareholders.

The claims that such a political figure’s visit would weaken the hardliners in North Korea do not fully embrace the stark realities of the communist state, where – as the young leader Kim Jong-un announced shortly after the launch, every policy decision should be made in accordance with Military First politics. Obviously, North Korea does not allow the existence of factions such as doves or hawks. No one can challenge the Kim family under the suryong (great leader) system.

Second, the sending of any influential figure to Pyongyang would make the North believe wrongly that Washington accepts the North’s provocative acts, which are a clear violation of the United Nations Security Council Resolutions 1718 and 1874, respectively. The alternative is to promote transparency as an antidote to the North’s nuclear ambitions.

Third, while North Korea made it clear in Beijing talks that the moratorium on long range missiles did not include its “peaceful” satellite launch, a seasoned intelligence officer would have judged rationally that the launch had been well-planned long before the February 29 Leap Deal to commemorate the 100th birthday of its national founder, Kim Il-sung.

If history is any guide, North Korea’s strategic pattern usually embraces a two-pronged message toward its people and Washington. The messages reinforce each other, as if the total were greater than the sum of the parts. Therefore, policymakers in Seoul rightly recognize that a scared person’s weapon could be the most dangerous one, national security concerns have historically been critical to the Kim regime in Pyongyang.

The North’s nuclear capability appears to have been significantly advanced and thus it has become more urgent and more difficult than ever in ending this dangerous game. The Obama administration and its ally, the conservative Lee Myung-bak government in South Korea, have yet to offer a credible strategy for how to cut through this conundrum. It is as if these traditional allies have no clear strategy for dealing with the north in the face of the fact that the North’s nuclear weapons program is an immediate threat to them.

I was not alone in believing optimistically that the February 29 deal, which included food aid in exchange for a halt in nuclear weapons tests and other provisions, would help the Obama administration change its stance toward the North’s new leadership. until the provocative launch wrecked the optimism. Secretary of State Hillary Rodham Clinton also said at a House Appropriations Committee hearing that the February deal would represent a modest first step in the right direction. So the world is paying a heavy price for Seoul’s and Washington’s optimism.

Paradoxically, the North’s repeated threats and bullying show that Pyongyang faces a blind alley. Unless North Korea stops blackmailing the South and President Lee, it seems apparent that there will be no clues in how to resolve the continuing crisis between the two Koreas. Few people any more trot out the Sunshine Policy enunciated by former President Kim Dae Jung in 1998 as a trophy.

In all, gravely increasing the instability of the Korean peninsula and making the fragile situation more explosive is North Korea’s reaction, as if it were the west that was at fault. But the truth is no one interrupted the North. Only if the North keeps the promise it made to the world, and ensures that steps for the denuclearization of the North are put into effect, can there be a future of hope and prosperity for the people living in the peninsula. Asia Sentinel

(Lee Byong-chul is a Senior Fellow at the Institute for Peace and Cooperation in Seoul.)
Posted by Kerry B. Collison at 3:31 PM