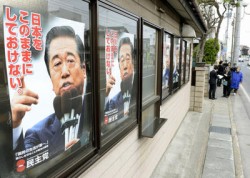 In a confusing decision reminiscent of the Scottish practice of allowing rulings of not only ‘Guilty’ and ‘Not Guilty’ but also ‘Not Proven’, the Tokyo District Court on 26 April found Ichiro Ozawa not guilty of conspiring to violate the Political Funds Control Law, while maintaining that Ozawa did allow the filing of misleading political fund account reports in his name. The judge also stated that he personally found it hard to believe Ozawa’s claim that he, Ozawa, had not viewed the reports before they were filed.

The verdict is largely irrelevant. As Toko Sekiguchi of the Wall Street Journal points out, Ozawa would have appealed if he was found guilty. Found not guilty, the Association of Those Seeking the Truth (Shinjitsu o Motomeru Kai) failed in its quest to milk the arrest of Okubo Takanori for some evidence to put Ozawa away. Given that the members of this group, whoever they are, all seem to be in retirement and thus with plenty of time on their hands to cause mischief (the Devil makes work for idle hands, after all) it is likely the Association will just find another blind alley to send prosecutors running down.

Whatever the purported goals of the cases against Ozawa and his aides, the political purpose has been served. The arrest of Okubo forced Ozawa to resign as head of the Democratic Party of Japan on the eve of the election that was to push the Liberal Democratic Party off its perch and install a DPJ-led coalition government. The resignation as party leader prevented Ozawa becoming prime minister. While Ozawa was able to engineer the election of his ally-puppet Hatoyama Yukio as his replacement, with Ozawa taking the role of effective party leader through the post of DPJ Secretary-General, Ozawa was denied the prize which he had long desired and had long laboured to seize. As for the arrests of former aides Ishikawa Tomohiro and Ikeda Mitsutomo, on the basis of evidence of violations of the Political Funds Control Law found by the prosecutors after a thorough search through the documents seized in relation to Okubo’s arrest, these weakened Ozawa’s position in the party, making it possible for middle-level legislators to challenge his stranglehold on party policy making.

Stripped of all formal party positions and even access to party funds for his own re-election, Ozawa had to exercise influence indirectly through the first-term and second-term legislators in the House of Representatives and the House of Councillors whom he had hand-picked as candidates, and through the largely second- and third-grade legislators who had followed him through party after party. These nominal disciples number about 150 legislators, a third of the DPJ’s membership in the Diet.

Without his hands on the money spigots of the party, particularly the public financing provided to finance elections, Ozawa has had to rely on the bonds of affection, loyalty and his own funding apparatus to keep his allies faithful. This bond has weakened, as Ozawa’s time in internal exile has dragged on. On issues of policy, such as opposition to the Trans-Pacific Partnership and the rise in the consumption tax, he has had to ally himself with other disaffected elements of the party, such as Mr No-To-Everything, Yamada Masahiko. He also found himself, in June 2011, on the verge of joining hands with the LDP, the party he had worked so hard to unseat and dismantle, in a vote of no-confidence against Prime Minister Kan. Only a last-minute and ultimately empty face-saving compromise worked out by the feckless Hatoyama prevented Ozawa from fulfilling the media’s negative portrayal of him as a selfish destroyer of parties and governments.

Even this indirect influence over party policy making has evaporated. In a show of principle and utter political naïveté, Ozawa’s allies in the DPJ dragged out the party debate over the legislation raising the consumption tax from a projected three days to three weeks. Exasperated, Prime Minister Noda Yoshihiko cut off debate, giving the final decision on the legislation to Policy Research Chairman Maeda Seiji — an outcome that effectively negated the entire three weeks of debate. In response, four of Ozawa’s acolytes in government positions and 30 in party positions resigned their posts. Eager to preserve party unity, the party leadership refused to accept the resignations, giving the legislators and Ozawa a chance to reconsider their actions. After six days of waiting, the government accepted the resignations of the government appointees on 5 April. It still left the door open, though, for those who had resigned party posts.

The party very quietly shut that final door on Monday, accepting resignations of the Ozawa allies who had resigned their party posts.

So as the political commentariat and twitterati awaited the verdict with bated breath, the political impact of the outcome is less significant than political observers will admit. Ozawa is now more shadow than shadow shogun. The current leadership group, knowing his tendencies, will not permit his appointment to any position of power. He will not be allowed near the party’s pot of political funds. His followers have abandoned the positions they could have used to influence or if necessary gum up policy making.
Ozawa has been the most influential, hated and fascinating Japanese politician of the last 30 years. What happened yesterday will not shake the political world to its roots; its branches may shiver a bit — but that is all.
Michael Cucek is a Research Associate at the MIT Centre for International Studies and the author of the Shisaku blog on Japanese politics and society.