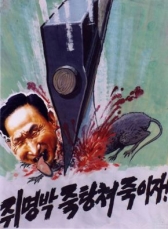 FOR years North Korea has been threatening to turn Seoul into a bulbada (sea of fire). Those who live here are well accustomed to such bluster, and are mostly happy to ignore it. Perhaps because of this, Pyongyang is now trying out a new style of tough talk.

The North’s Korean Central News Agency (KCNA), whose legendary bellicosity has spawned such mocking tributes as this “random-insult generator”, is now naming individual targets. Predictably, South Korea’s president, Lee Myung-bak, with his habit of fussing Pyongyang with talk of regime change, makes the top of the list.

But also in line for “reduction to ashes in three or four minutes, by unprecedented unusual means” are some of the South’s main media outlets.

This apparently includes the main national broadcasters, KBS, YTN, and MBC. In Seoul, they seem like strange choices: many of their reporters are currently on strike, on the grounds that the government has been interfering with their coverage. Conservative dailies, on the other hand, like the Choson Ilbo, Joongang Ilbo and Dong-a Ilbo—to which liberals refer collectively as the Chojoongdong—are more obvious targets, given their frequent criticism of the Kim regime. They must have readers in Pyongyang too, as the Dong-a was named specifically in the statement read by the spokesman for the Supreme Command of the People’s Army.

The KCNA also released a fresh series of anti-Lee cartoons, unprecedented in their nastiness. Those who cannot understand Korean will have no difficulty in deciphering their rough intent. The clever slogans however might be missed. The first translates as “Let’s tear Rat Myung-bak to death!”, the Korean word for “rat” rhyming as it does with the president’s surname. South Korean satirists had been making use of this euphony for years; it’s probably now time for them to pick a new joke.
Stung by the very public failure of its recent satellite-cum-missile launch, the North may feel the need to remind everyone just how scary it can be. Kim Jong Un’s rule also needs solidifying within the leadership, which gives additional reason for some sort of provocative act. It has generally been assumed that this would mean a third nuclear test, to come within the next few weeks, but an attack on what they call the “Lee Myung-bak traitor faction” (including the conservative media) would certainly fit the bill. Two hundred and forty extra officers were sent to patrol the main offices of South Korea’s most threatened media outlets yesterday.

One hale and hearty Chojoongdong journalist says “I’m absolutely not scared. And the police presence is annoying”. Granted, North Korea’s bark is usually worse than its bite. And perhaps the Northerners’ missiles are looking ever so slightly less fearsome these days.