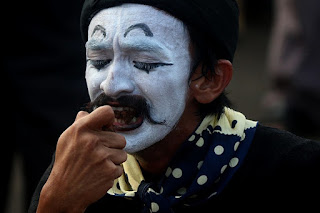 A file photo of a human rights activists takes part in a theatrical performance at a weekly gathering of activists in protest at the government's refusal to address a litany of rights abuses. (Antara Photo/Rivan
President Joko Widodo has given no better era for human rights despite the commitments he made during the 2014 presidential campaign, human rights watchdog Amnesty International said in the 2015 annual report.


Josef Benedict, Amnesty's campaigns director for Southeast Asia and Pacific, said Joko has failed to fulfill his pro-human rights commitment he made during the 2014 presidential campaign, including promises to protect religious minorities, address human rights violations and respect the freedom of expression.


“A lot of expectation that situation would change when Jokowi came to the office, but we’ve continued to see the problems in the past that yet been addressed, like the Shia community in Sampang, Ahmadiyah community in Lombok. The people have been displaced from their homes and not able to return,” Josef told Jakarta Globe in Jakarta, on Wednesday (24/02).


He said harassment, intimidation and attacks against religious minorities have persisted and fueled by discriminatory laws and regulations at both national and local levels.


Meanwhile, the situation of a number of religious communities who had been subject to violations remained uncertain.


Three years after local authorities evicted a community of a Shia Muslims in Sampang, East Java, following an anti-Shia protest, around 300 members remain displaced from their homes.


“And we’ve seen the new cases like Gafatar community recently and Ahmadiyah activities are still being shut down in some places,” Josef said.


More than 1,600 members of Gafatar were moved from a farming community village in Moton Panjang, Mempaway district, West Kalimantan, to their hometowns by the government following violent protests from locals surrounding the community last month.


Last August, off-duty military personnel shot dead two people after opening fire in front of a church in Timika, Papua. In the same district, police shot two unarmed high school students during a security operation in September, killing one of them, Amnesty reported.


During a Jakarta peaceful labor rally in October, police reportedly arrested and beat 23 protesters, including two legal aid activists, for refusing to disperse.


“The issue of security forces shows the reality why human rights continue to happen — which is because the accountability system in Indonesia is still very weak. Komnas HAM [National Commission on Human Rights] and Kompolnas [National Police Commission] should actually addressed the situation of violations by the police,” Josef said.


Amnesty appreciated government willingness to establish a non-judicial mechanism to resolve past human rights violation through a "reconciliation committee" as a small but positive step.


The move follows decades of impunity for human rights abuses which occurred during the 1965 to 1998 reign of former president Suharto.


However, victims and NGOs remain concerned the process will prioritze reconciliation and undermine efforts to unveil the truth and seek justice.


Poor marks were still given to Joko’s administration for executing 14 prisoners between January and April, including 12 foreign nationals, for drug-trafficking activities, for which the president had previously stated to refuse considering any clemency applications.


Filipino Mary Jane Veloso was initially set to be executed that year but was postponed at the 11th hour after her alleged trafficker surrendered to Filipino authorities.


Haris Azhar, Coordinator of the Commission for the Disappeared and Victims of Violence (Kontras), predicted there will be no improvement this year as the government is yet to take any serious steps to address human rights violations.


“The figure in January has showed that might be no improvement in human rights this year,” Haris said, adding the Joko has so far performed as worse commitment to human rights than his predecessor Susilo Bambang Yudhoyono.