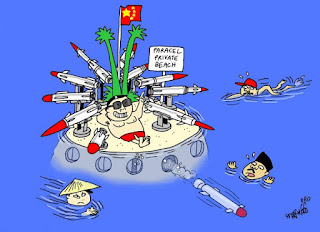 Chinese state media said defenses had been in place on Woody Island, part of the Paracel chain in the hotly disputed sea, for years, and denied it was militarizing the island. Satellite images taken on February 14 appeared to show several missile batteries and support vehicles, according to ImageSat International, which took the images.


Taiwan's Defense Ministry said Wednesday it had confirmed that surface-to-air missiles had been deployed. U.S. officials, who spoke on condition of anonymity, told CNN that commercial satellite imagery showed the deployment of missile batteries. 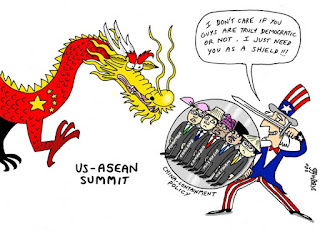 
China controls the Paracel chain, but Taiwan and Vietnam also claim it; Brunei, Malaysia and the Philippines are also embroiled in disputes with China over islands in the region and their surrounding waters.


Showdown in the South China Sea: How did we get here?


But China's Defense Ministry said Wednesday that defense facilities had existed on the islands for years, according to the government-run Global Times. It wasn't clear whether the report was referring to the surface-to-air missiles identified by Taiwan officials, which satellite imagery suggested had been deployed this month.


The Global Times asserted that the Paracel Islands were Chinese territory and that China had the legal right to deploy defensive measures to protect its territorial sovereignty and integrity. It blamed Western media for attempting to "hype up the so-called China threat."


Earlier, China's Ministry of Foreign Affairs spokesman Hong Lei told reporters that the "deployment of defense facilities in our own territory is appropriate and reasonable."


Reports of the missile batteries on Woody Island prompted China's neighbors to appeal for restraint Wednesday amid concerns Beijing was changing the status quo in the region.


Taiwan President-elect Tsai Ing-wen responded to the news by calling on "all parties to exercise self-control based on the principle of peaceful resolution of disputes in the South China Sea," according to Taiwan's official Central News Agency.


"It is a common concern of the international community that China tries to change the situation and increase tensions in the South China Sea by carrying out extensive and rapid land reclamation, building its base in the region and utilizing it for military purposes," Suga said at a press conference.


"We have deep concerns over such actions and want to re-emphasize that Japan cannot accept (them)."


The deployment came as President Barack Obama called for the halt of the militarization of the South China Sea at the close of a meeting with Southeast Asian leaders in California.


Obama pressed for a "halt to reclamation, new construction and militarization" of Asia's oceans, an indirect reference to China's rapid construction in the South China Sea of airstrips and ports in the Spratly Islands that could have military uses.


A senior U.S. official told CNN that the decision to deploy at the time of the summit was a "further demonstration of China's attempt to unilaterally change the status quo" in the South China Sea.


And Secretary of State John Kerry, asked Wednesday about the surface-to-air missiles, said the administration has had conversations with the Chinese government.


"There is every evidence every day there has been an increased militarization of one kind or another," Kerry said in Washington. "It's a serious concern."


He said the United States would talk further with the Chinese in the coming days.


"And my hope is, China will realize that it is important to try to resolve the jurisdictional issues of the South China Sea not through unilateral action, not through force, not through militarization but through diplomacy, working with the other countries and claimants and trying to resolve these differences."


On the sidelines of the meeting in California, Vietnamese Prime Minister Nguyen Tan Dung urged Obama to have a "strong voice" and take "more practical actions" to put an end to activities aimed at changing the status quo in the region, according to a Vietnamese government news website.


Dung said the developments were a "real threat to peace, security, safety and freedom of navigation and aviation," VGN News reported.


In the Philippines, presidential spokesman Edwin Lacierda told state-owned Philippines News Agency that the country was in favor of moves "not to exacerbate tensions in the South China Sea" but had yet to verify reports on the Chinese missile deployment.


China is not alone in developing its assets in the disputed region.


Other countries, including Taiwan, the Philippines, Malaysia and Vietnam, have developed airstrips capable of handling military aircraft, according to the Asia Maritime Transparency Initiative, a project run by the Center for Strategic and International Studies think tank, which tracks the activities of states in the Asia-Pacific region.


But Ashley Townshend, a visiting fellow at the Center for Asia-Pacific Cooperation and Governance at Shanghai's Fudan University, said China's missile deployment on Woody Island was clearly a "provocation."


He said China briefly deployed fighter jets last year on the island, which it has occupied since the 1950s.


"China's presence is tacitly accepted. What's new there is a steep increase in these missile deployments, which gives it more military significance," he said.


"It should be looked at in the strategic perspective of China hardening its presence in the South China Sea."


China's "nine-dash line" -- its claimed territorial waters that extend hundreds of miles to the south and east of its island province of Hainan -- abut its neighbors' claims and, in some cases, encroach upon them.


Tensions have risen as China has reclaimed more than 2,000 acres of land in a massive dredging operation in the Spratly Islands, turning sandbars into islands equipped with airfields, ports and lighthouses.