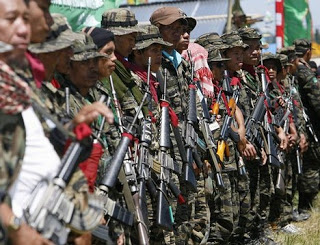 Muslim militants attacked an army camp in the southern Philippines, sparking three days of sporadic clashes that left three soldiers and up to 20 attackers dead.


The fighting broke out late Saturday when about 40 militants from a still-unspecified group opened fire on the camp in Butig town in Lanao del Sur province. Soldiers defended the camp, sparking on-and-off clashes in the remote region. 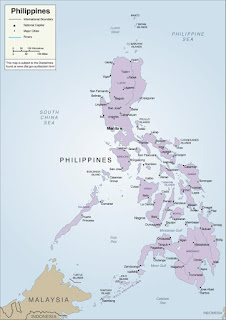 
The fighting eased on Monday but army reinforcements were fired upon in nearby Tugaya town, leaving one soldier dead. The attackers come from a group affiliated with an Indonesian terror suspect known only as Sanusi who was killed in Marawi city in the volatile region in 2012.The main Muslim rebel group, the Moro Islamic Liberation Front, has a large camp in the hinterlands of Butig, but the insurgents, who signed a peace deal with the government in 2014, backed away to avoid being drawn into the fighting.
Posted by Kerry B. Collison at 12:08 PM