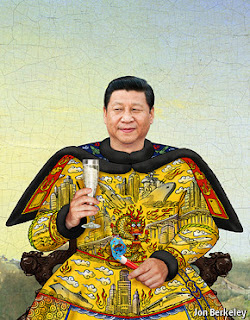 Were disgruntled Chinese Communist Party members plotting an internal coup to undermine President Xi Jinping?
That question has been swirling among China watchers and ordinary Chinese even before Xi officially took the reins of power in 2012, ever since the ouster, arrest and later trial of the former Chongqing Party chief and strongman Bo Xilai, a charismatic onetime rival of Xi's in the top leadership.


Following Bo's ouster in March 2012, there were several signs of a fierce ideological struggle inside the party.  Several so-called "new Maoist" websites supporting Bo were shut down, and there were even Internet rumors, unsubstantiated and largely discredited, circulating of unrest in the military. A small number of people at the time were arrested for fabricating or disseminating online rumors of a coup, and words like "coup" and "tank" were banned from Chinese Internet search engines.


Recently, rumors of a foiled coup attempt have been revived by a rather unlikely source: Xi Jinping himself.


In December, the Chinese government's Central Documents Press published a banal and little noticed book containing 200 extracts of Xi's speeches to the party faithful. In one of the extracts, from January 2015, Xi mentioned Bo; his supposed mentor, the now-disgraced and jailed security chief Zhou Yongkang; Ling Jihui, a now-jailed former top aide to China's last president; and other (since purged) senior officials as being involved in "serious violations of party discipline and the law."


Also mentioned as plotters in the scheme were General Xu Caihou, vice chairman of the powerful Central Military Commission who was expelled from the party and was being investigated for corruption when he died of cancer in March 2015; and Su Rong, a longtime regional chief who was accused of corruption as party chief in Jiangxi province. Su was also blamed for showing "blatant disregard for party political rules" and having "poisoned the local political environment."


China's secretive, closed-door political system is largely opaque to outsiders, leaving a few China-watchers struggling to glean meaning from obscure clues and hints. Those analysts are now parsing Xi's words, trying to determine if the unspecified "political plot activities" amounted to a coup attempt against Xi -- and whether the challenge from Bo and Zhou was more serious than was known at the time.


China's leaders are notoriously loath to speak publicly of any divisions in the top ranks. So longtime China hands are also puzzled about the timing of the release of the extract with references to efforts to "split the party."  Does publicizing the plot mean the threat has been eliminated? Is it meant to serve as a warning to others who may still be plotting to desist? Or is it meant to spread a sense of terror, signaling that potential rivals may, also, be swept up in the search for enemies within?
Recently, rumors of a foiled coup attempt have been revived by a rather unlikely source: Xi Jinping himsel
"I'm sure there was something going on, but we really don't know enough," said Minxin Pei, a China scholar at California's Claremont McKenna College. "Were they actually plotting Xi Jinping's downfall, or were they plotting a diminution of his powers?"


Contrary to some analysts who believe Xi can talk openly about the plot because he is now firmly in control, Pei takes the opposite view:  Xi's statement reveals there was, and likely still is, more turmoil behind the scenes than has previously been acknowledged.


"The fact that he chose to make this public shows the party is not unified," Pei noted. "His predecessor would not have done this." Xi, he said, "is the first leader since Tiananmen Square to say there is a conspiracy inside the Communist Party."


Other signs from China also suggest continuing internal strife -- if only because Xi and his top cohorts are going to such lengths to stress the importance of "unity" and the need to instill discipline in the ranks.


Xi, who has embarked on a sweeping anti-corruption campaign that has ensnared thousands of officials, has also launched an effort to get all of the sprawling 90 million-member Communist Party to faithfully toe the line. The party's Central Commission for Discipline Inspection has become the leading tool for enforcing rigid orthodoxy.


Xi, in another speech newly released by the discipline commission, warned party members not to "ask the things they should not ask" and not to "run after the so-called internal information and spread it in private." And the most recent target of the ongoing purge appears to be Wei Hong, the governor of Sichuan province, who was demoted to a lower level position and stripped of his party duties. His case is considered unusual, since he was punished not for corruption, but for being "disloyal to the party," according to the discipline commission.

Left to right: Zhou Yongkang at the Communist Party's national congress in November 2012 and in court on June 11, 2015


The most serious past threat to Xi appeared to come from Bo Xilai. Bo was already jailed by the time Xi came to power, but his ideas -- on social welfare, economic redistribution and Mao-inspired mass mobilization campaigns -- had taken hold among a significant number of so-called "new leftists" inside the party who had grown disenchanted with China's widening wealth gap, the breakup of state-run monopolies, and the party's drift away from socialist egalitarianism.


Bo's wife, Gu Kailai, was tried and convicted for the poisoning of British businessman, Neil Heywood, who was found dead in a Chongqing hotel room in November 2011. Bo was convicted of corruption and "serious discipline violations." Bo's downfall was believed to have led directly to the purge of his mentor, Zhou Yongkang, once considered the most powerful, and feared, man in China for his control over the vast security apparatus.


The Bo saga exposed the most serious known rift in the party in decades.  Now, with new revelations of "plotting," it appears that period around Bo's ouster was far more fraught than previously known.


Most analysts agreed there was likely never any chance of military involvement in the unspecified "plot activities." The system is too centralized and bureaucratic to allow any mobilization of troops or material to go undetected. But one military watcher, Dean Cheng of the Heritage Foundation in Washington said, "Something wasn't right. There was much more to the Bo business."


Bo was, like Xi, a princeling -- his father, Bo Yibo, was one of the revolutionary heroes around Mao known as the "Eight Immortals." And the younger Bo cultivated a huge personal following in Chongqing, and instituted projects like his "red song" singing campaign that brought thousands of people into parks on weekends to sing Mao-era patriotic tunes.


Unlike almost every other Communist leader, Bo was also media-friendly and sought out publicity.  He boasted that his social welfare plans constituted a new "Chongqing model" of development. During a 2011 trip to Chongqing for an economic conference, I had a brief and impromptu hallway interview with Bo, who happily stopped and answered my questions spontaneously, something unheard of in China. Bo occasionally broke into English, and quoted Franklin Roosevelt saying, "We have nothing to fear but fear itself." "My theory is not that Bo was literally planning a coup," said the Heritage Foundation's Cheng who also met Bo in 2012. "But he was even scarier. Bo was a populist in the Party. Bo was Donald Trump, before Trump even thought about running for president."


Have the Bo acolytes all now been silenced or contained?


In January, the discipline commission announced it would be sending teams to fan out across the country to assess how well the party agencies were toeing the line from the central leadership, meaning from Xi. An official leading the tours told Hong Kong's South China Morning Post that the inspections should be completed in 2017, when the next Communist Party Congress, the 19th, is scheduled.


China's leadership is due for an unusual leadership reshuffle at that Party Congress. Of the nine members on the Politburo Standing Committee, only Xi and his prime minister, Li Keqiang, are expected to remain. The other five will all be past the party's traditional retirement age for senior office-holders. The prospect of such a vast shake-up "creates a whole new area of instability," Cheng said.


What is impossible to know is whether Xi, who has swiftly consolidated power, will feel free to name his own cohorts to shape a new standing committee, or whether China is in for another period of unspecified plots, splits and internal intrigue.


My guess is that the stepped-up repression -- the arrests of lawyers, dissidents and journalists, the crackdown on nongovernmental agencies -- is a sign of regime insecurity, not confidence and strength. And as China enters a new period of slowing economic growth, we may be in for more uncertainty, much like in 2012 before the last Congress. But that is only a guess, since we are all on the outside looking in.


"Things are definitely not stable," concluded Minxin Pei. "But how bad are they? It's a black box."


Keith B. Richburg was foreign editor of The Washington Post from 2005 to 2007 and served as the paper's bureau chief in Paris, Manila, Nairobi, Hong Kong and Beijing.
Posted by Kerry B. Collison at 12:45 PM