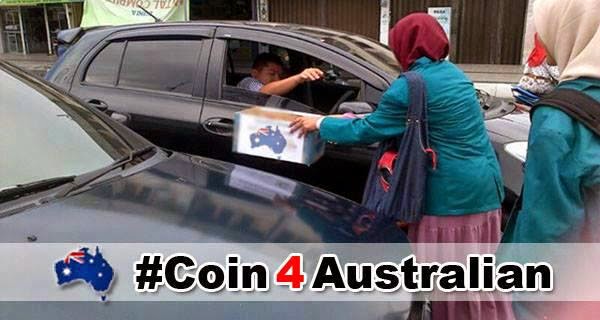 Prime Minister Tony Abbott is facing an Indonesian social media backlash over his linking of $1 billion in tsunami aid to the mercy campaign for Bali Nine death-row inmates Andrew Chan and Myuran Sukumaran, with a campaign urging people to collect coins to return to Australia.


On the streets of Indonesian cities people were asking motorists and passersby for spare change. Meanwhile, social media users were posting pictures of the money they had gathered and hurling insults at Mr Abbott and Australia.


Many also expressed their support for death by firing squad for Chan and Sukumaran.


The twitter campaign, using the hashtags #KoinuntukAustralia, #coinforAustralia and #coinforAbbott and growing rapidly in popularity, highlights how Mr Abbott's remarks have backfired badly in the country.


Social media is huge in Indonesia, with its citizens among the biggest adopters of the technology in the world


Speaking on Wednesday, Mr Abbott said: "Let's not forget that a few years ago when Indonesia was struck by the Indian Ocean tsunami, Australia sent a billion dollars worth of assistance.


"I would say to the Indonesian people and the Indonesian government: we in Australia are always there to help you and we hope that you might reciprocate in this way at this time."


Her diplomacy seemed to soothe the concerns of Indonesia's leaders. Its president Joko Widodo said he was satisfied by the explanation on Friday, while also revealing that his government had been preparing a formal rebuke to Mr Abbott.


But many ordinary Indonesians remain enraged.


The campaign originated in Aceh, the Indonesian province that was hit hardest  by the Boxing Day tsunami of 2004 that killed more than 100,000 people there.


Among those behind the campaign are victims of the tsunami.


Muhammad Riza, a victim of the tsunami, said Mr Abbott's comments were "childish"


"It's not making any sense. How can aid be mentioned again?," he said. "If they weren't sincere, the community will give it back" he told Tempo, an Indonesian media outlet. SMH


On Twitter, Mr Riza said the Australian prime minister was "seungke", referring to an Acehnese saying that those who take back a gift will suffer a skin condition on their elbow.


Meanwhile, supporters of Chan and Sukumaran brought more than 100 bunches of flowers to Kerobokan prison to thank the governor and guards - as well as the Australians - for their efforts to introduce rehabilitation programs in the penitentiary.


The flowers were organised by the Mothers for Mercy organisation, a Bali-based group.


While there is sympathy for the duo in Bali, especially among expatriates, it does not extend much beyond the confines of the holiday island.


Unlike the rest of Indonesia, many Balinese are aware of the extraordinary reforms at Kerobokan instigated by the Chan, Sukumaran and the prison staff.
Posted by Kerry B. Collison at 2:25 PM