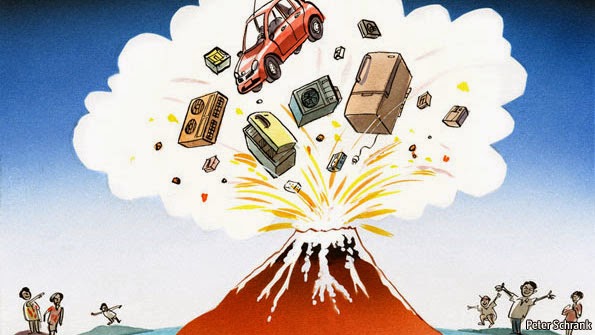 For the nuclear bureaucrat, lying seems to be as essential and continuous a human process as breathing.

I am not averse to the argument that a greater reliance on nuclear energy, despite its massive risks, might provide an alternative future preferable to being cooked to death by greenhouse gases.

But I must say that I do not think that nuclear energy should be in the hands of the current crew under the current system.

The nuclear agenda is largely in control of the legacy nuclear powers, whose dominance is enshrined in the imbalanced arrangement of the Non-Proliferation Treaty and its creature, the International Atomic Energy Agency (IAEA). The United States and Russia, in particular, are nuclear horror shows when it comes to the waste, haste, shortcuts, and accidents inseparable from the birth of nuclear science in the crisis atmosphere of a world war and ensuing Cold War.

Neither of these nations, I would aver, is particularly interested in a new, more conservative model of radiation risk baselining that might impose onerous economic, political, and public health costs on their governments.

The Japanese government (which, under Prime Minister Abe is set on nuclear power as a strategic national initiative) and Tokyo Electric Power Corporation (TEPCO) are pretty much cut from the same cloth.

Prime Minister Abe, in order to secure a key Japanese government priority, the 2020 Olympics, had this exchange with the IOC in September 2013 about the situation at the crippled nuclear power station at Fukushima:

Let me assure you the situation is under control," [Abe] said.

"It has never done or will do any damage to Tokyo."

"You should read past the headlines and look at the facts," he said.

"The contaminated water has been contained in an area of the harbor only 0.3 square kilometers big.

"There have been no health problems and nor will there be. I will be taking responsibility for all the programmes with regard to the plant and the leaks.

Fast-forward to April 20, 2014, courtesy of Japan Times: "It's embarrassing to admit, but there are certain parts of the site where we don't have full control," Akira Ono told reporters touring the plant last week. ..."

It appears that Abe's "under control" assurances were based, at worst, on shaky assurances from TEPCO that the Japanese government was in no mood to question in the crucial run up to the awarding of the Olympic bid, or at best upon the rather unsophisticated idea that TEPCO would contain the contaminated water in tanks, so it wouldn't reach the harbor, until some other more permanent solution got worked out.

Lots and lots of tanks.

The permanent solution has been slow in coming.

Add to the burgeoning storage tank farm the problems of radiation-averse contract workers hastily constructing and piping tanks and the inevitable problems of leaks, mis-routing, and overflows. Add the difficulty in getting the balky liquid processing system up and running. Add the challenges of trying out the new science of freezing a gigantic underground wall of ice to keep water from the ocean. Add the fact that 400 tons of groundwater flow through the site every day, and after TEPCO struck a deal with the local fishermen to dump 100 TPD into the ocean, it turns out that the water might be too contaminated to dump, anyway.

There are many ways to describe the contaminated water situation at Fukushima. "Under control" is not the most accurate. "Fighting a holding action for the next 30-40 years" as the physics of radionucleide decay ineluctably reduces the danger (and Abe and his promises to take responsibility have entered LDP Valhalla) is perhaps a better description.

"Abe lied Tokyo's way into the 2020 Olympics" is also not complete hyperbole.

With this context, it is not terribly surprising that lawyers for sailors on the aircraft carrier USS Ronald Reagan consider TEPCO a target-rich environment for the lawsuits they are filing to claim redress for TEPCO's alleged negligence in the matter of the plume of radioactive material that the Ronald Reagan sailed under and, thanks to the unfortunate circumstance of the downwash of a snowstorm, into, while conducting relief operations off the east coast of Japan after the earthquake and tsunami of March 2011.

Their claims have been shrugged off and under-reported in the US and Japan on the grounds that the radiation exposure was so minor it could not have caused any health problems. I don't buy it, and not just because there is a predisposition in the nuclear industry to shade the truth.

There are good reasons to believe that radiation doses were not - could not be - accurately measured, and that valuable science on the extensive negative health outcomes for radiation workers, derived particularly study of the vast army of Chernobyl liquidators, has not been properly addressed, and a thoroughgoing rethinking of the scientific orthodoxy of radiation sickness and of the global nuclear regulatory apparatus should precede any new wave of nuclear power plant construction.

Peter Lee writes on East and South Asian affairs and their intersection with US foreign policy.

The author addresses the issue of radioactive contamination of the USS Ronald Reagan and its crew in an article for the CounterPunch monthly magazine, "Fukushima's Nuclear Shadow: Fallout Over the USS Reagan" in which he also discusses little-known elements of the Chernobyl disaster, and the story behind one of the most serious episodes of radioactive contamination from nuclear testing in the United States