African-Americans and the Philippine-American War 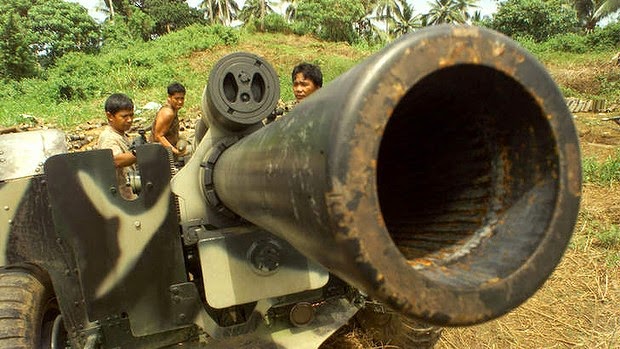 As President Barack Obama , the first African-American president, visits the Philippines this week, this may be a good time for both Filipinos and African-Americans to acquaint themselves with an often-forgotten part of the historic Philippine-American war (1899-1902), which transformed the United States into an empire and a global power.


I refer to the quizzical role played by African-American soldiers in the war of conquest and empire, and their curiously ambivalent attitude to the proclaimed mission of “taking up the White Man’s burden” and civilizing Filipinos.

The English poet Rudyard Kipling coined the phrase “the white man’s burden” in his famous poem that urged America to take the Philippines. The poem opens with these lines:

Take up the White man’s burden —
Send forth the best ye breed —
Go bind your sons to exil
To serve your captives’ need;
To wait in heavy harness
On fluttered folk and wild —
Your new-caught, sullen peoples,
Half devil and half child.

According to the historian Barbara Tuchman, ”The poem, published in a two-page spread by Mclure’s Magazine, was quoted across the country within a week, and quickly reconciled most Americans to the expenditure of bullets, brutality and trickery that soon proved necessary to implement it.”


It has also been suggested by other writers that Kipling’s poem helped in rallying volunteers for the US campaign of conquest in the Philippines. Many volunteered eagerly because of the opportunity it afforded for an adventure in the vast Pacific Ocean.


How did black Americans (African-Americans is now the preferred term) react to the idea of taking up the white man’s burden?


It’s not an idle question to raise because in 1898, the United States had just surmounted a costly civil war just three and a half decades earlier, a war mainly fought on the issue of slavery and the emancipation of black Americans.


These source materials provided invaluable insights and information about black-American attitudes to the war and to the major policy battles that ensued after the US annexed the Philippines for $20 million in 1898.


One major source material is David J. Silbey’s book A War of Frontier and Empire (The Philippine- American War, 1899-1902). In one key passage, he wrote:


“The sending of African-American soldiers to the Philippines created the deepest of ambiguities. Soldiering had long been a valuable and valued career path for African-American men cut off from most other economic and career pursuits.


“Once they were in the Philippines, the African-Americans found disturbing parallels in the relationships between the Filipinos and the white soldiers. It was an easy step for white soldiers, steeped in 19th century’s easy racism, to bring patterns of behavior abroad.


“The difficulties were profound for African-American soldiers; their duty was to fight against an enemy with whom they had some sympathy; and live among people becoming victims of the same ‘diabolical race hatred’ that they experienced at home.”


In his highly praised A People’s History of the United States, Howard Zinn provides the following information:


Four black regiments were sent to the Philippines. Many of the black soldiers established rapport with the Filipinos, and they were angered by the term “nigger” used by white troops to describe the Filipinos.


The Filipino rebels often addressed themselves to “the colored American soldier” in posters, reminding them of lynchings back home, asking them not to serve the white imperialist against other colored people.


An unusually large number of black troops deserted during the Philippine campaign.


Some deserters joined the Filipino rebels. The most famous of these was David Fagan of the 24th Infantry. He accepted a commission in the insurgent army and for two years, he wreaked havoc on American forces.


In his book, Smoked Yankee and the Struggle for Empire, Willard Gatewood reproduces and analyzes 114 letteres written by black soldiers to African-American newspapers in the period from 1898-1902.


One soldier wrote in 1899: “Our racial sympathies would naturally be with the Filipinos. They are fighting manfully for what they conceive to be their interests. But we cannot for the sake of sentiment turn our back upon our own country.”


Another black soldier wrote in June 1901 to an Indianalpolis paper: “This struggle on the islands has been naught but a gigantic scheme of robbery and oppression.”


Back home in America, African-American leaders, including prominent church leaders agitated against the American war on the Filipinos. Some joined the Anti-Imperialist League that was organized and led by such luminaries as the philosopher William James, the writer Mark Twain and the industrialist Andrew Carnegie. Most of the black press opposed President Mckinley’s Philippine policies.


A meeting of Boston black citizens and leaders adopted a resolution in July 1899 that they sent to the president, and protested “the unjustified invasion by American soldiers in the Philippine Islands.”


The senior bishop of the African Methodist Episcopal Church, Henry M. Turner, called the campaign in the Philippines “an unholy war of conquest” and referred to the Filipinos as “sable patriots.”


Zinn reports that the period of the Philippine-American war coincided with a time of intense racism in the US. In the years between 1889 and 1903, on the average, every week, two Negroes were lynched by mobs – hanged, burned, mutilated. The Filipinos were brown-skinned, physically identifiable, strange-speaking, and strange-looking to Americans. To the usual brutality of war was thus added the factor of racial hostility.


I bring up this subject with no thought of laying on President Obama “a black man’s burden.” To the contrary, I offer this as a salute to the African-American soldiers who came here to our country over a century ago.