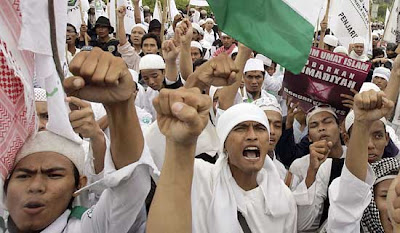 INDONESIANS are used to mixed news about their country. Even so, February 7th was an unusually contradictory day.

The government crowed that GDP had grown by 6.9% year-on-year in the last quarter of 2010, the highest figure for six years. One minister predicted that under the government’s cunning economic master plan, the country was set to become one of the world’s ten biggest economies within 15 years. First world here we come.

Yet the same morning it was reported that a mob of hundreds of Muslims had stabbed and beaten to death three members of the small Ahmadiyah Muslim sect in a village not far from the capital, Jakarta. It was the most frenzied and bloody incident of religious violence in Indonesia for a long time, embarrassingly plain for all to see on a video circulating on the internet.

The next day another mob of 1,500 Muslims went on the rampage in the central Javanese town of Temanggung. This time they were angry about a court verdict given to a Catholic man accused of blaspheming Islam. He got the maximum sentence, but this apparently was not enough for the protesters, who burned three churches to the ground.

A roaring economy and religious violence are evidence of a growing disparity between Indonesia’s global ambitions and its problems at home. South-East Asia’s most populous land feels it is time to play a bigger role on the world stage, by virtue of its economic size and its status as the world’s third-largest democracy. Yet many Indonesians are now saying that if their country is to be taken seriously abroad, it will have to clean up its act at home.

Indonesia’s more robust foreign policy is partly a matter of happenstance, partly a product of President Susilo Bambang Yudhoyono. He is serving his second and final term in office, a natural time to look overseas to burnish his legacy. In 2009 Indonesia joined the G20 club of major economies, giving it a higher profile. In January Indonesia took over the rotating leadership of the Association of South-East Asian Nations (ASEAN), the ten-nation regional body.

Mr Yudhoyono’s government has also taken its own initiatives. The president has improved sometimes strained ties with the United States. America, for its part, sees Indonesia as a counter to China’s ambitions in the area, as does India. Mr Yudhoyono was recently feted in India, where he signed $15 billion-worth of trade deals.

Another presidential initiative was the founding, with Australia, of the Bali Democracy Forum in 2008, to promote human rights and democracy. To begin with, America was among those who dismissed the new outfit as a talking shop, particularly since the likes of Myanmar were invited. But the forum’s credibility has grown, and many countries, including America, now send senior representatives to the annual event. The forum is an attempt to carve out a niche for Indonesia in Asian diplomacy. The country trades on its democratic record since the fall of Suharto, the late dictator, in 1998, as well as on its supposed commitment to religious moderation. The archipelago of 237m people is home to the world’s largest Muslim population.

Yet here pretensions meet hard reality. In the wake of the Ahmadi killings, some Indonesians point not just to the absence of the state when it is needed—the police failed dismally to protect the rights, let alone lives, of the Ahmadis. They also accuse the government of sanctioning attacks because it bowed to pressure from hardliners in 2008 and passed a decree banning Ahmadis from proselytising or worshipping in public. Scores of attacks on Ahmadis have taken place since. The suspicion remains that government and the police fail to be tough on Indonesia’s Islamic extremists for fear of provoking a backlash, thus allowing intolerance and bigotry to flourish. One academic outfit, the Wahid Institute, estimates that the 100-plus religiously motivated attacks and instances of intolerance last year marked a 50% increase over 2009.

In foreign policy Indonesia ducks and fudges too. Anies Baswedan, an academic and presidential adviser, believes that Indonesia could afford to be “much clearer and more outspoken” against Myanmar’s egregious human-rights violations and its flouting of democratic norms without alienating other members of ASEAN. Furthermore, such a stand would also send a sharp message to a domestic audience that Indonesia has “zero tolerance on human-rights violations and religious violence abroad and at home”.

It would be a compelling message for a president keen to make his mark. Diplomats and investors will now be watching the resumption of the trial this week of a radical Muslim cleric, Abu Bakar Basyir, accused of helping to set up an Islamic-militant training camp in Aceh province. He was previously convicted of involvement in the bombings in Bali in 2002, which killed over 200 people. Basyir’s previous sentences have been light. If found guilty this time, will it be zero tolerance, or more fudging still? The Economist
Posted by Kerry B. Collison at 1:34 PM

Email ThisBlogThis!Share to TwitterShare to FacebookShare to Pinterest
Labels: Indonesia and its place in the world - Religious intolerance thwarts ambitions abroad