The Asian Legal Resource Centre (ALRC) is seriously concerned by ongoing, widespread human rights violations and violent acts being committed by the Indonesian security forces in the Papuan highlands in Indonesia. Impunity typically accompanies even the most serious abuses, as shown by the lack of effective remedies in a case of severe torture that the ALRC has documented recently. Despite institutional reforms in Indonesia, effective accountability for human rights violations in Papua is lacking, resulting in impunity that then engenders further atrocities.

Impunity and the sense of injustice that it engenders in society are having a strong impact on social stability and cohesion in Papua. Repression, discrimination and human rights violations by the Indonesian security forces are adding to tensions. Papuans reportedly feel like second-class citizens in Indonesia, even within Papua itself, and face discrimination, poverty and injustice as a result. The military arbitrarily suspect Papuans of being linked with rebel groups and stigmatise them, subjecting them to abuse. 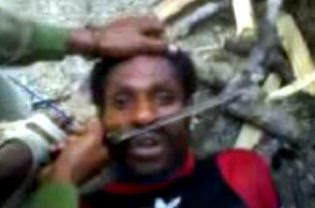 The State has failed to provide justice and remedies and to bring prosperity and equality to Papua through the Special Autonomy Law, despite it being Indonesia's most resource-rich region. Demonstrations in Jayapura, the capital of the Papuan province, have repeatedly rejected the Special Autonomy Law of 2001, with many civil society speakers having labelled it as being a failure. The autonomy parliament in July 2010 issued a decree formally rejecting the law and demanding a referendum on the political status of the autonomy region. The law was rejected mainly due to it having failed to deliver on any of the key demands of indigenous Papuans since its enactment. These include economic aspects but security and the need for protection against discrimination and human rights violations also figure highly. 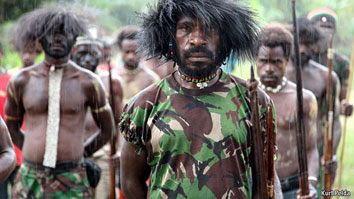 The repeated calls by Papuan politicians, church and other civil society leaders for a dialogue between Papua and Jakarta have not been responded to by the government. Given the ongoing grave human rights violations by Indonesian security forces and the deteriorating relations between Papua and Jakarta, the ALRC is concerned that the situation of human rights risks declining seriously in the coming period, unless Indonesia takes meaningful action to address its role in the worsening situation. To be credible in doing this, the Indonesian government and military must ensure that human rights violations are halted and impunity is shown to be being dismantled, with justice being served and reparation being provided to victims.

Torture and impunity -- a symbol of abuse and injustice

In the high-profile torture case mentioned above, which remains emblematic of the situation of human rights in Papua at present, Mr. Tuanliwor Kiwo, an indigenous Papuan man, was arbitrarily detained and tortured in May/June2010 by the Indonesian military. Mr. Kiwo was arrested at the Kwanggok Nalime TNI post near Yogorini village on his way from Tingginambut towards Mulia, Papua, Indonesia. During two days of detention, Mr. Kiwo was subjected to several serious forms of torture including burning, beatings and other forms of violence, resulting in serious injuries and Mr. Kiwo falling unconscious. He was able to escape in the morning of the third day. Mr. Kiwo is currently in hiding for security reasons but has given a detailed testimony of his torture in a video recording.

While cases of torture are often reported from Papua, this case received significant international attention after video footage of the torture2 was published by the Asian Human Rights Commission (AHRC) in October 2010. As a result of the significant public pressure concerning this case, three members of the military were tried in a military tribunal for disobeying their superior's order to release the victim and were sentenced to between nine and twelve months imprisonment. The ALRC is concerned that the charge and punishment in this case are not commensurate with the gravity of the violation that severe torture represents. Furthermore, the victim has not been provided with any form of remedy. Despite its high profile nature, this case speaks to the Indonesian system's inability to address torture as a serious crime and human rights violation, and its failure to provide adequate reparation to victims. In less visible cases, even less can be expected, and impunity typically prevails.

In another case of violence by members of the military in the March 2010, that was also published in October 2010, the perpetrators have received sentences of an equally disproportionately low nature. Three solders from the Indonesian military's Pam Rahwan Yonif 753/Arga Vira Tama squad, based in Nabire, Papua, were given a five-month imprisonment sentence by the military court III/19, Cenderawasih military command in Jayapura in November 2010, for having kicked and beaten arrested indigenous Papuans whom they suspected of involvement in separatist activities. The names of the convicted officers are Chief Pvt Sahminan Husain Lubis, Second Pvt Joko Sulistiono and Second Pvt Dwi Purwanto. Military judge Lt. Col. Adil Karokaro explained in the verdict that the defendants had breached the Indonesian military's code of conduct by torturing the residents.

The government of Indonesia continues to deny the widespread use of violence by the Indonesian military in Papua, and alleges that these violations are rare and isolated, individual cases. However, the ALRC continues to receive further cases of violence against indigenous Papuans, including killings by the police and military, arbitrary arrests, the burning of houses and killing of livestock, which point to a widespread pattern of the use of violence, as well as a policy of intimidation by the Indonesian military. Human rights violations and other crimes committed against civilians by members of the military are still only tried by military courts, which lack independence, transparency, a comprehensive penal code incorporating human rights norms, and a system of punishments that are proportional to the severity of the crimes committed. A military tribunal is not able to hold perpetrators of torture accountable in line with international law standards. Such tribunals cannot invoke any military regulations that prohibit the use of torture. Therefore, perpetrators cannot be tried for committing torture and no remedies can therefore be provided to victims.

Furthermore, the country's penal code does not include torture as a crime This means that members of the police that commit torture remain immune from criminal prosecution. Indonesia is therefore failing to comply with its obligations under the Convention Against Torture. Indonesia ratified the Convention against Torture in 1998, but the use of torture is still widespread and systematic, as cases received and documented by the ALRC attest. The promised review of the penal code has been delayed for years despite recommendations made to the government of Indonesia, which it accepted, during the Universal Periodic Review in this regard.

From a human rights perspective, it is vital for Indonesia to immediately begin to take credible action to tackle impunity and be seen to be tackling it in an effective way. Jakarta must ensure that the security forces halt the use of excessive force and violence-based strategies in dealing with security-related issues in Papua. Allegations of human rights violations must be investigated and any lacuna in legislation and due process must be addressed. For example, torture must be criminalized in line with Indonesia’s international obligations under the Convention Against Torture. Military personnel who are alleged to be responsible for human rights violations against civilians must be tried in civilian courts.

The ALRC invites the Special Rapporteur on the independence of judges and lawyers to recommend institutional reforms to the government of Indonesia to ensure that members of the military are held accountable by independent courts that uphold human rights and constitutional values and ensure that these are made available to legislators in Indonesia. The ALRC also requests that the Special Rapporteur on torture and other cruel, inhuman or degrading treatment or punishment follow up with the Indonesian government to ensure the full implementation of the recommendations made to Indonesia during the UPR review regarding the review of the penal code and the full criminalisation of torture.

Furthermore, the ALRC urges the Indonesian government to heed the call for dialogue made by the Papuan indigenous community and avoid a further deterioration of the conflict in Papua. Finally, the ALRC calls on the Indonesian government to release all Papuan political prisoners, in order to show its commitment to a new path towards peace, security and human rights in Papua.