Does China's government have anything to fear from the revolt in Egypt? 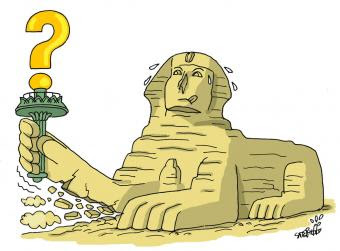 During most of the 18 days that protesters rallied in Cairo, the Chinese Communist Party's Publicity Department apparently instructed China's media to use only dispatches sent by the official news agency, Xinhua, and either to bury news of events there or play up aspects that show the costs of turmoil. While news from Egypt was available from plenty of overseas sources to Chinese citizens who knew how to find it online, "Egypt" was stricken from the popular microblogging sites, or weibo, that China uses in place of Twitter. The attempt to control the public’s interpretation of popular uprising was striking.

Whether with the aid of Twitter or without, less-than-perfectly-democratic governments around the world were watching the contagious fall of North African dictatorships with rapt attention. But does China's government, so unlike Egypt's in so many striking respects, have reason to watch in worry?
Posted by Kerry B. Collison at 3:14 PM

Email ThisBlogThis!Share to TwitterShare to FacebookShare to Pinterest
Labels: Does China's government have anything to fear from the revolt in Egypt?