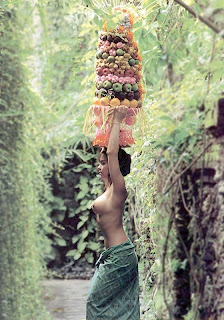 
Today marks the 64th anniversary of Indonesia's birth as a nation. Let's use this occasion to recall the wise words of the late President Sukarno, spoken in Surabaya in 1955:

Indonesia, may she grow in greatness over the coming years!

Holiday or not, Bali Update wings its way to you every Monday.

As predicted by Bali Update one month ago, the government has changed its policies on handling H1N1 infections, with most new cases now treated on an outpatient basis. Bali's new Chief of Police has met and exchanged information with the island's hoteliers. Rats continue to lay farm fields bare in several parts of Bali. And, an estimated 75% of the commercial villas in Gianyar are said to be illegal operations.

Bali's airport managers fight back with information on taxes paid and donations made to the Island of Bali. Many grapes farmers in North Bali are reverting back to rice agriculture. And, the Dancing Dragon Cottages in Ahmed has permanently and quite suddenly closed its doors.

Following an internal admnistrative hand-slapping for misusing Rp. 300 million, the case involving 44 immigration officers at Bali's airport may have another chapter to pay as prosecutors consider criminal charges.

Many visitors to Bali were no doubt amazed last week to find themselves rubbing shoulders with former British PM Tony Blair and family, holidaying in Bali.

There's a guest editorial on the "Changing Face of Bali" that's worth a read and a follow up article on the exciting eco-tourism project in Bayad, near Tampaksiring.

Mark your calendars for an important art show in Ubud September 11-30, 2009 and a "Pajama Party" on August 29th where I and Rucina Ballinger will be working as guest auctioneers.