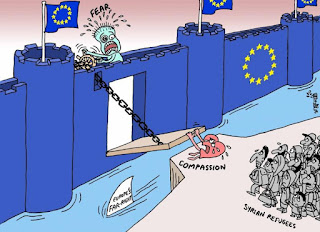 Some economists think the current wave of migration into Europe is an almost unmitigated positive for the region. They miss a wider point. Migration is a tribute, and a huge challenge, for governments, and one that unpicks the myth of inevitable globalisation.


A typical summary of the positives comes from the European economics team at Credit Suisse. It starts with the short term. This year's tripling of migrants into the euro zone, to about 2 million people, creates a stimulus to demand. The extra money governments spend to house, feed and educate the new arrivals almost all adds to rather than replaces other consumption, so it increases total output. Credit Suisse expects an additional 0.2-0.3 percentage point increase in the single currency block's 2016 GDP. 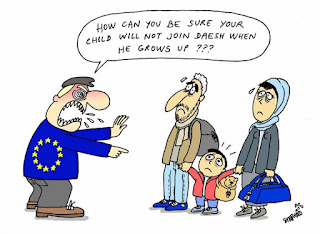 (Kerry B. Collison Providing there is no compromise in the selection between 'economic refugees' and real 'refugees escaping oppression' , such refugees accepting that they must adjust, and not just assimilate to their host country then we can all agree that humanitarian considerations are a must here.)

The longer-term expectations are even more positive. In the investment bank's words: "The effect of a large number of migrants on euro-area public finances, pensions, demographics and potential growth should be positive." The Organisation for Economic Co-operation and Development, an economic organisation of mostly rich countries, comes to a similar conclusion: "Migrants can, eventually, become valued and valuable contributors to the economic and social health of countries."

The underlying argument is simple. Thanks to decades of low birth rates, Europe has relatively few energetic young people. And thanks to migration, here they are, materialised without the delay of waiting for more babies to be born and grow into workers. Their work will increase GDP, their tax payments will balance government budgets and their savings will fund pensions.

Reality looks quite different. The long-suffering immigrants from war-torn countries are mostly just desperate, while many European politicians and voters fear something like a foreign invasion. Economists, though, still see a likely macroeconomic windfall. The only substantial risk, as Holger Schmieding of Berenberg bank points out, is that the new immigrants, and especially their children, do not integrate well into their new societies.

If maximising GDP and minimising fiscal deficits are paramount economic goals, then the economists are right. GDP usually falls as the populations of already rich countries decline, while fiscal deficits typically rise as the share of old people, who rely more on government support, increases.

The problem with this GDP-demographic analysis of migration is that it is almost irrelevant, at least outside of the narrow world of financial markets. The economic concerns of individuals are personal, not national. The effect of migration on average prosperity, as measured by GDP per capita, has typically not been very large. However, the measure is crude. No number can capture the many ways immigration changes the native population's economic life - jobs, housing, shopping and urban experience.

As for demographics and deficits, immigration may be a cure, but the worries migration is supposed to mitigate are vastly exaggerated. Thanks to high labour productivity in today's rich countries, there is usually a far greater shortage of jobs than of workers. The surplus ensures that the economic resources needed to care for the increased numbers of old people will be readily available, although some political will, and perhaps a bit of financial and fiscal sleight of hand, will be needed to mobilise them.

If total GDP and demographics do not matter much, how might an economist respond to a European citizen anxious about waves of migrants?

They could start by being quiet. Economists have no particular insight into most of the effects of migration. They are not trained to comment on how best to combine cultures, and even less well prepared to answer the urgent moral question of what sort of help people living in comfort and safety should offer to those who live in danger and poverty. There are no obligations to neighbours in the conventional view of "economic man".

Economists would do better to discuss how this massive migration is both a compliment and a threat to the welfare state. That is after all one of the key structures of successful industrial economies. When the Statue of Liberty was built, the "huddled masses" arriving in the United States received little or no help from the authorities. Now migrants want to come to Germany in part because they are confident that schools, hospitals and other organs of modern government will help them adjust.

The migrants are probably right about Germany. The country is sufficiently rich, organised and determined, at least for the moment, to support a generous "welcome culture". The task is much harder for countries such as Greece and Hungary.

Perhaps the greatest economic lesson is that political borders still set the economic agenda. Don't tell the people taking unsafe boats or dodging border guards about globalisation and the power of multinational corporations. They understand that a single step into a different country will change their prospects dramatically. The welfare state is one part of the national package that creates that difference. For all the talk of a single world economy, nations remain the leading promoters and protectors of prosperity. The Nation, Bangkok
Posted by Kerry B. Collison at 3:35 PM