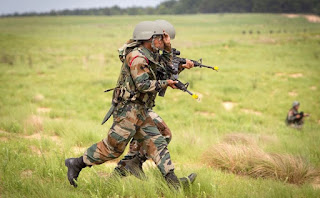 
Lt Gen DS Hooda (retd) is right when he talks about needless hype over operations like the surgical strikes. Note, of course, that he is not arguing that such strikes are wrong, but that the accompanying hype, often aimed at playing to the political gallery, undermines their military value.


There is, of course, the larger question as to the very nature of the so-called surgical strikes of September 29, 2016, that had been launched to avenge the Uri militant strike of September 18. Northern Army Commander Lt Gen Ranbir Singh who, as DGMO, announced the strikes, responded to Hooda by saying  that the strikes were a successful tactical operation that  had conveyed a message to  Pakistan.


Lt Gen Ranbir Singh’s statement is not borne out by facts. Pakistan did not stop its ‘misadventures’ as he quaintly put it. Almost two months later,  on November 29, Jaish militants attacked an Army base in Nagrota and in the ensuing shootout 10 soldiers, including three officers were killed.


The Nagrota strike was far more serious than the Uri one. Unlike Uri, which is very close to the LoC and more vulnerable, Nagrota is somewhat inland. More important, it is the headquarters of the huge 16 Corps and should thus have had a much higher level of protection.


But by far the more damaging was the fact that the Indian Army did not react to this provocation. If the surgical strikes after Uri were meant to deter further Pakistani ‘misadventure’, the only way it would work as a strategy, would be if the Army hit Pakistan hard every time it launched an attack.


The next year, 2017, there were several attacks across the LoC attributed to Pakistani jihadis and forces. In one, an Indian patrol was attacked in Krishna Ghati sector of the Poonch district, killing two soldiers. In December, a Pakistani Border Action Team (BAT) came half a kilometre into Indian territory and killed four soldiers, including a Major.


Early this year, there was another Jaish attack on the Sunjuwan camp housing soldiers and their families, a few kilometres to the east of Jammu City. As many as 11 soldiers and a civilian were killed and 20 injured.  Yet, there was no reaction comparable to the surgical strikes. So it is evident that  the strikes did not deter Pakistan.


You can draw many conclusions from this. One is that the Indian policy of surgical strikes was flawed to start with. Perhaps publicising it the way it was done was not a good idea. Or, the Army had not thought through its strategy because if it was aimed at sending a signal that India would no longer sit back and tolerate attacks such as the ones on Pathankot and Uri,  the Army needed to demonstrably hit back at Pakistan every time jihadis or BAT attacks took place.


Clearly, there are hazards in the latter policy. If demonstrable strikes take place, the two countries could get locked into an escalatory cycle which could eventually lead to war. That neither side wants this is evident from the fact that their cross-LoC activity remains limited. Even episodes of cross-border bombardment that occasionally take place on the LoC or the border in Jammu, usually end in a ceasefire. That is why, it is important to keep a tight control on the escalatory framework. The way of doing this earlier was to keep the retaliatory cycles secret and not let them enter the political or electoral cycles in either country because hype tends to be the hand-maiden of politics. That the strikes were politicised is no secret. Whether it is in the speeches of BJP leaders or the posters that came up, the strikes were widely featured in the Uttar Pradesh state Assembly elections of 2016.


At the end of the day, there is the challenge of deterring Pakistan. It is one thing to deter it from the point of view of nuclear weapons and large-scale conventional conflict, and quite another to make it cease and desist from sending groups of militants in the name of ‘political support’ to the Kashmiri militancy.


India has not yet found the formula of dealing with them. The so-called surgical strikes were mooted as the solution, but they have clearly not worked.


Having initiated a policy, it was important for the Army to follow through with that policy, which it did not, because the main purpose of the strikes was to make a political statement which was aimed at the UP elections. The Indian challenge was neatly side-stepped by Islamabad which simply denied that such strikes took place and did not feel compelled to respond to the Indian action in word or deed.


New Delhi certainly has the option of using military retaliation every time the Pakistanis act. The politicians do not mind basking in the glory of the strikes because they took out a few terrorist launching pads for no loss of life. But escalation, even a larger skirmish, always has the possibility of going awry and putting pressure on the government to enhance the level of violence when things don’t go according to plan. We cannot be sure just how Islamabad will react and we should not exaggerate our capabilities with regard to Pakistan. In such matters, sober realism is the best approach, and this would tell us that we need a different menu of options when it comes to bringing down and eliminating the violence in Jammu & Kashmir.


This article originally appeared in The Tribune.