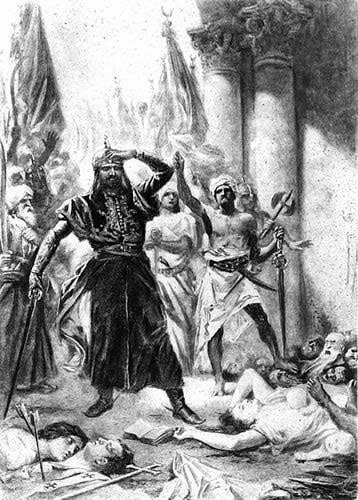 I do not, will not, cannot support, endorse, condone or encourage violence of any sort toward any human being. There are ideologies in this world that I hate, abhor and am passionately against – but take note – I am against the ideas NOT the person who subscribes to them. My issue is with the idea.


Islam is one such ideology. The very basic tenet of Islam is “there is no god but allah and Muhammad is his messenger.” To subscribe to Islam, to call yourself a muslim, you must believe this statement. You must never disrespect, mock, condemn or put down the prophet considered most highly above others. To call yourself a Muslim you must revere, respect and protect Muhammad. Some even say to be a good Muslim you must imitate the prophet Muhammad.


In today’s world you would have to live under a rock to be ignorant of the fact that Muhammad’s character and practices are not compatible with our values or lifestyle. Muhammad was a warlord, picking fights with people who wouldn’t submit.


He took slaves. He called Jews and Christians pigs and other horrid names. He made captives pay taxes to keep their heads. He condoned lying. He raped women and encouraged others to do likewise. He murdered people. He took a child bride and encouraged others to do likewise. He had more than one wife. He told his followers to strike terror into the hearts of unbelievers.


It would seem to me according to this list Man Haron Moris actually lived up to some, but not all, aspects of the prophet Muhammad’s character and example. He raped women, he murdered people and he struck terror into the hearts of unbelievers.


It is truly wonderful that Muslims all over Australia and the world have condemned his actions. What is truly terrifying is that I haven’t heard any of them condemn the prophet Muhammad despite the fact Man Haron Moris was simply aspiring to imitate him. His first and most prominent statement during the siege was the flag that boasted, “There is no god but allah and Muhammad is his messenger.”


You see, for a Muslim to condemn Muhammad it would mean he is not in fact a Muslim.


It is perfectly ok to condemn a Muslim who imitates him though. In Islam, taqiyya ???? (alternative spellings taqiyeh, taqiya, taqiyah, tuqyah) is a form of religious dissimulation, or a legal dispensation whereby a Muslim can deny his faith or commit otherwise illegal or blasphemous acts while they are in fear or at risk of significant persecution.


You see the Muslim population fears repercussion, so taqiyya is perfectly ok. I don’t condone any sort of physical or violent repercussion other than a discussion of ideas.


I am against Islam. I am not against Iranians, Afghanis, Indonesians, Iraqis, Saudi Arabians, Turks, or anyone else. All people are precious and amazing in their own right. But some ideologies are inherently dangerous. I believe Islam is one of them. We now live in a culture where it is almost impossible to have a sensible and serious conversation about these concerns. It all degenerates to name calling within a few sentences.


Man Haron Moris had thousands of followers. He was not a lone wolf. He is not isolated in his ideas. It has been suggested that only 10% of Muslims are Islamic extremists. Well less than 10% of Germans were Nazi’s and we know how that turned out.


With hindsight we all condemn Hitler and those who remained silent. This well-known verse was penned by Rev. Martin Niemoeller, a German Protestant Pastor, who initially supported Hitler but later became an outspoken critic of the Nazis. He was arrested in 1937 and spent most of the war in German concentration camps.


“First they came for the Socialists, and I did not speak out -- because I was not a Socialist.


Then they came for the Jews and I did not speak out -- because I was not a Jew.


Then they came for me -- and there was no one left to speak for me.”


In light of this I am not going to remain silent. I will ride with, stand with, sit with, speak with any human being from any race. I believe all people deserve to be treated with respect and dignity. But that doesn’t mean agreeing. And when I am concerned about something I will speak out.


I am very concerned about Islam in Australia, and around the world. I have seen the effects of jihad first hand in Indonesia. I have met Somalians, Sudanese, Syrians and more who have suffered so much because of this ideology called Islam.


To uphold Muhammad in anyway is greatly offensive to me, and it is deeply troubling that an estimated 150 million or more people in the world desire to imitate his behaviour. Small numbers can have a huge impact! Look at how one man stopped a nation this week, striking terror into the hearts of unbelievers and killing innocent people. By Kirralie Smith is the creator of the halal choices website, shopping guide book and phone app and an expert on halal certification of foods and supermarkets in Australia www.halalchoices.com.au
Posted by Kerry B. Collison at 1:19 PM