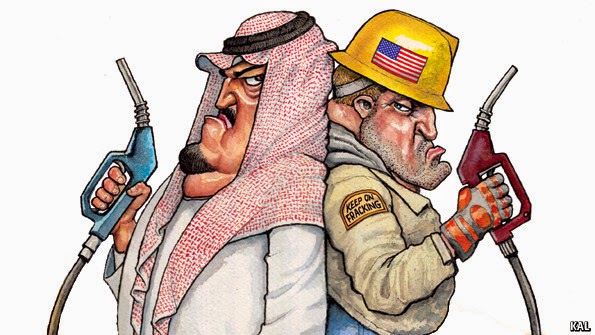 The economics of oil have changed. Some businesses will go bust, but the market will be healthier


THE official charter of OPEC states that the group’s goal is “the stabilisation of prices in international oil markets”. It has not been doing a very good job. In June the price of a barrel of oil, then almost $115, began to slide; it now stands close to $70.


This near-40% plunge is thanks partly to the sluggish world economy, which is consuming less oil than markets had anticipated, and partly to OPEC itself, which has produced more than markets expected. But the main culprits are the oilmen of North Dakota and Texas. Over the past four years, as the price hovered around $110 a barrel, they have set about extracting oil from shale formations previously considered unviable. Their manic drilling—they have completed perhaps 20,000 new wells since 2010, more than ten times Saudi Arabia’s tally—has boosted America’s oil production by a third, to nearly 9m barrels a day (b/d). That is just 1m b/d short of Saudi Arabia’s output. The contest between the shalemen and the sheikhs has tipped the world from a shortage of oil to a surplus.


Cheaper oil should act like a shot of adrenalin to global growth. A $40 price cut shifts some $1.3 trillion from producers to consumers. The typical American motorist, who spent $3,000 in 2013 at the pumps, might be $800 a year better off—equivalent to a 2% pay rise. Big importing countries such as the euro area, India, Japan and Turkey are enjoying especially big windfalls. Since this money is likely to be spent rather than stashed in a sovereign-wealth fund, global GDP should rise. The falling oil price will reduce already-low inflation still further, and so may encourage central bankers towards looser monetary policy. The Federal Reserve will put off raising interest rates for longer; the European Central Bank will act more boldly to ward off deflation by buying sovereign bonds.


There will, of course, be losers (see article). Oil-producing countries whose budgets depend on high prices are in particular trouble. The rouble tumbled this week as Russia’s prospects darkened further. Nigeria has been forced to raise interest rates and devalue the naira. Venezuela looks ever closer to defaulting on its debt. The spectre of defaults and the speed and scale of the price plunge have unnerved financial markets. But the overall economic effect of cheaper oil is clearly positive.


Just how positive will depend on how long the price stays low. That is the subject of a continuing tussle between OPEC and the shale-drillers. Several members of the cartel want it to cut its output, in the hope of pushing the price back up again. But Saudi Arabia, in particular, seems mindful of the experience of the 1970s, when a big leap in the price prompted huge investments in new fields, leading to a decade-long glut. Instead, the Saudis seem to be pushing a different tactic: let the price fall and put high-cost producers out of business. That should soon crimp supply, causing prices to rise.


There are signs that such a shake-out is already under way. The share prices of firms that specialise in shale oil have been swooning. Many of them are up to their derricks in debt. Even before the oil price started falling, most were investing more in new wells than they were making from their existing ones. With their revenues now dropping fast, they will find themselves overstretched. A rash of bankruptcies is likely. That, in turn, would bespatter shale oil’s reputation among investors. Even survivors may find the markets closed for some time, forcing them to rein in their expenditure to match the cash they generate from selling oil. Since shale-oil wells are short-lived (output can fall by 60-70% in the first year), any slowdown in investment will quickly translate into falling production.


This shake-out will be painful. But in the long run the shale industry’s future seems assured. Fracking, in which a mixture of water, sand and chemicals is injected into shale formations to release oil, is a relatively young technology, and it is still making big gains in efficiency. IHS, a research firm, reckons the cost of a typical project has fallen from $70 per barrel produced to $57 in the past year, as oilmen have learned how to drill wells faster and to extract more oil from each one.


The firms that weather the current storm will have masses more shale to exploit. Drilling is just beginning (and may now be cut back) in the Niobrara formation in Colorado, for example, and the Mississippian Lime along the border between Oklahoma and Kansas. Nor need shale oil be a uniquely American phenomenon: there is similar geology all around the world, from China to the Czech Republic. Although no other country has quite the same combination of eager investors, experienced oilmen and pliable bureaucrats, the riches on offer must eventually induce shale-oil exploration elsewhere.


Most important of all, investments in shale oil come in conveniently small increments. The big conventional oilfields that have not yet been tapped tend to be in inaccessible spots, deep below the ocean, high in the Arctic, or both. America’s Exxon Mobil and Russia’s Rosneft recently spent two months and $700m drilling a single well in the Kara Sea, north of Siberia. Although they found oil, developing it will take years and cost billions. By contrast, a shale-oil well can be drilled in as little as a week, at a cost of $1.5m. The shale firms know where the shale deposits are and it is pretty easy to hire new rigs; the only question is how many wells to drill. The whole business becomes a bit more like manufacturing drinks: whenever the world is thirsty, you crank up the bottling plant.


So the economics of oil have changed. The market will still be subject to political shocks: war in the Middle East or the overdue implosion of Vladimir Putin’s kleptocracy would send the price soaring. But, absent such an event, the oil price should be less vulnerable to shocks or manipulation. Even if the 3m extra b/d that the United States now pumps out is a tiny fraction of the 90m the world consumes, America’s shale is a genuine rival to Saudi Arabia as the world’s marginal producer. That should reduce the volatility not just of the oil price but also of the world economy. Oil and finance have proved themselves the only two industries able to tip the world into recession. At least one of them should in future be a bit more stable. The Economist
Posted by Kerry B. Collison at 2:58 PM