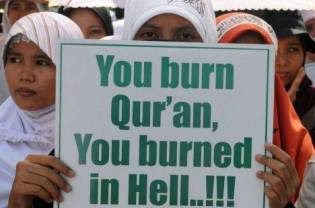 Hizbut Tahrir Indonesia activists at a rally outside the US Embassy in Jakarta on Saturday. A US church has said it will burn copies of the Koran on the anniversary of the 9/11 terrorist attacks. (Photo/Aldo Utama)


Jakarta. As the weekend saw protests in different parts of the country against an American church’s plan to mark the anniversary of the 9/11 terrorist attacks by burning copies of the Koran, pluralism advocates on Sunday called for cooler heads to prevail and violence to be avoided.

The Dove World Outreach Center in Gainesville, Florida, said it will burn the Islamic holy book on the ninth anniversary of the terror attacks.

Local officials have denied a permit for the bonfire on the church’s grounds, but the center — which made headlines last year by distributing T-shirts that said “Islam is of the Devil” — insists it will go ahead with the plan.

In Jakarta on Saturday, about 3,000 members of the hard-line Islamic group Hizbut Tahrir Indonesia marched to the US Embassy in Jakarta waving banners and posters condemning the plan.

The group organized similar rallies in five other cities across Indonesia.

In Kendari, Southeast Sulawesi, about 400 members of the local HTI chapter staged a peaceful demonstration against the planned course of action. And in the East Java town of Sumenep, on Madura Island, HTI activists took to the streets on Friday.

Indonesian religious leaders have condemned the plan and called on US authorities to have the bonfire prohibited. Extract from article by Ulma Haryanto in the Jakarta Globe
Posted by Kerry B. Collison at 3:03 PM