Afghanistan The Forever War: 2016 and Then Some 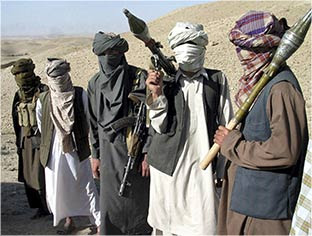 Sometimes it’s the little things in the big stories that catch your eye. On Monday, the Washington Post ran the first of three pieces adapted from Bob Woodward’s new book Obama’s Wars, a vivid account of the way the U.S. high command boxed the Commander-in-Chief into the smallest of Afghan corners. As an illustration, the Post included a graphic the military offered President Obama at a key November 2009 meeting to review war policy. It caught in a nutshell the favored “solution” to the Afghan War of those in charge of fighting it -- Admiral Mike Mullen, Chairman of the Joint Chiefs of Staff, General David Petraeus, then-Centcom commander, General Stanley McChrystal, then-Afghan War commander, and Secretary of Defense Robert Gates, among others.

Labeled “Alternative Mission in Afghanistan,” it’s a classic of visual wish fulfillment. Atop it is a soaring green line that represents the growing strength of the notoriously underwhelming “Afghan Forces,” military and police, as they move toward a theoretical goal of 400,000 -- an unlikely “end state” given present desertion rates. Underneath that green trajectory of putative success is a modest, herky-jerky blue curving line, representing the 40,000 U.S. troops Gates, Petraeus, Mullen, and company were pressuring the president to surge into Afghanistan. The eye-catching detail, however, was the dating on the chart. 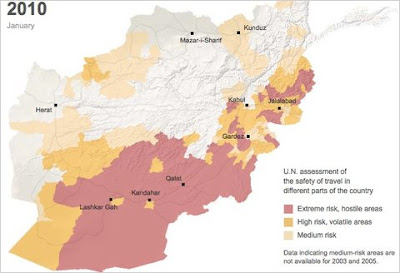 Sometime between 2013 and 2016, according to a hesitant dotted white line (that left plenty of room for error), those U.S. surge forces would be drawn down radically enough to dip somewhere below -- don’t gasp -- the 68,000 level. In other words, three to six years from now, if all went as planned -- a radical unlikelihood, given the Afghan War so far -- the U.S. might be back close to the force levels of early 2009, before the President’s second surge was launched. (When Obama entered office, there were only 31,000 U.S. troops in Afghanistan.)

And when would those troops dwindle to near zero? 2019? 2025? The chart-makers were far too politic to include the years beyond January 1, 2016, so we have no way of knowing. But look at that chart and ask yourself: Is there any doubt that our high command, civilian and military, were dreaming of, and most forcefully recommending to the president, a forever war -- one which the Office of Budget and Management estimated would cost almost $900 billion? Of course, as we now know, the military “lost” this battle. Instead of the 40,000 troops they desired, they “only” got 30,000 from a frustrated president (plus a few thousand support troops the Secretary of Defense was allowed to slip in, and some special operations forces that no one was putting much effort into counting, and don’t forget those extra troops wrung out of NATO as well as small allies who, for a price, couldn’t say no -- all of which added up to a figure suspiciously close to the 10,000 the president had officially denied his war commanders).

When, on December 1, 2009, Barack Obama addressed the cadets of West Point and, through them, the rest of us to announce the second surge of his presidency, he was at least able to slip in a date to begin a drawdown of U.S. forces. (“But taken together, these additional American and international troops will allow us to accelerate handing over responsibility to Afghan forces, and allow us to begin the transfer of our forces out of Afghanistan in July of 2011.”) Hardly a nanosecond passed, however, before -- first “on background” and soon enough in public -- administration spokespeople rushed to reassure the rest of Washington that such a transfer would be “conditions based.” Given conditions there since 2001, not exactly a reassuring statement. Meanwhile, days before the speech, Afghan war commander McChrystal was already hard at work stretching out the time of the drawdown date the president was still to announce. It would, he claimed, begin “sometime before 2013.” More recently, deified new Afghan War commander General David Petraeus has repeatedly assured everyone in sight that none of this drawdown talk will add up to a hill of beans.

Let’s keep two things in mind here: just how narrow were the options the president considered, and just how large was the surge he reluctantly launched. By the end of the fall of 2009, it was common knowledge in Washington that the administration’s fiercely debated Afghan War “review” never considered a “less” option, only ones involving “more.” Now, thanks to Woodward, we can put definitive numbers to those options. The least of the "more" options was Vice President Biden’s “counterterrorism-plus” strategy, focused on more trainers for the Afghan military and police plus more drone attacks and Special Forces operations. It involved a surge of 20,000 U.S. troops. According to Woodward, the military commanders, the Chairman of the Joint Chiefs, and the Secretary of Defense more or less instantly ruled this out. The military’s chosen option was for those 40,000 troops and an emphasis on counterinsurgency. Between them lay a barely distinguishable 30,000-35,000 option. The only other option mentioned during the review process involved a surge of 85,000, and it, too, was ruled out by the military because troops in that quantity simply weren’t available. This, then, was the full “range” of debate in Washington about the Afghan War. No wonder the president, according to Woodward, exclaimed in anger, "So what's my option? You have given me one option."

It’s also important to remember that this round of surgification involved a lot more than those 30,000 troops and various add-ons. After all, the “president” -- and when you read Woodward, you do wonder whether a modern president isn’t, in many ways, simply a prisoner of Washington -- also managed to surge CIA personnel, triple State Department, USAID, and other civilian personnel, and expand the corps of private contractors. Perhaps more significant, that December the president and his key advisors set the Af/Pak War -- to use the new term of that moment -- on an ever widening gyre. Among other things, that escalation included a significant acceleration in U.S. base-building activity which has yet to end; a massive increase in the CIA’s drone war over the Pakistani tribal borderlands (a quadrupling of attacks since the last year of the Bush administration, including at least 22 attacks launched this September, the most yet in a month); a recent uptick in Air Force bombing activity over Afghanistan (which General McChrystal actually cut back for a while), an increase in Special Operations activity throughout Afghanistan; and an increase in border crossings into Pakistan.

The last of these, in particular, reflects the increasing frustration of American commanders fighting a war going badly in Afghanistan in which key enemies have sanctuaries across the border. Thanks to Woodward’s book, we now know that, in 2002, the Bush administration allowed the CIA to organize a secret Afghan “paramilitary army,” modeled after the U.S. Special Forces and divided into “counterterrorist pursuit teams.” Three thousand in all, these irregulars have operated as proxy fighters and assassins in Afghanistan -- and, in the Obama era, they have evidently also been venturing into the Pakistani tribal borderlands where those CIA drone attacks are already part of everyday life. In addition, just days ago, U.S. helicopters upped the ante in the first of two such incidents by venturing across the same border to attack retreating Taliban fighters in what U.S. military spokespeople have termed “self-defense,” but what was known in the Vietnam era as “hot pursuit.”

In addition, U.S. military commanders, the New York Times reports, are threatening worse. (“As evidence of the growing frustration of American officials, Gen. David H. Petraeus, the top American commander in Afghanistan, has recently issued veiled warnings to top Pakistani commanders that the United States could launch unilateral ground operations in the tribal areas should Pakistan refuse to dismantle the militant networks in North Waziristan, according to American officials.”) In the next year, that label “Af/Pak” could come into its own as a war-fighting reality. All of this is, of course, part of the unspoken Pentagon doctrine of forever war. And lest you think that the 2016 date for an Afghan drawdown was a one-of-a-kind bit of planning, consider this line from a recent New York Times report by Michael Gordon and John Burns on Pentagon anxiety over the new British government's desire to cut defense spending by up to 20%: “American and British officials said that they did not expect any cutbacks to curtail Britain’s capabilities to fight in Afghanistan over the next five years.” Let that sink in for a moment: “over the next five years.” It obviously reflects the thinking of anonymous officials of some significance and, if you do the modest math, you once again find yourself more or less at January 1, 2016. In a just released Rolling Stone interview, even the President can be found saying, vaguely but ominously, of the Afghan War: "[I]t's going to take us several years to work through this issue."

Or consider the three $100 million bases (or parts of bases) that Walter Pincus of the Washington Post reported the Pentagon is now preparing to build in Afghanistan. These, he adds, won’t be ready for use until, at best, “later in 2011,” well after the Obama troop drawdown is set to begin. According to Noah Shachtman of the Danger Room blog, one $100 million upgrade for a future Special Operations headquarters in northern Afghanistan, when done, will include: a “communications building, Tactical Operations Center, training facility, medical aid station, Vehicle Maintenance Facility... dining facility, laundry facility, and a kennel to support working dogs... Supporting facilities include roads, power production system and electrical distribution, water well, non-potable water production, water storage, water distribution, sanitary sewer collection system, communication manhole/duct system, curbs, walkways, drainage, and parking.Additionally, the project will include site preparation and compound securitymeasures to include guard towers.”

A State of War to the Horizon

Tell me: Does this sound like a military getting ready to leave town any time soon? And don’t forget the $1.3 billion in funds pending in Congress that Pincus tells us the Pentagon has requested “for multiyear construction of military facilities in Afghanistan.” We’re
obviously talking 2012 to 2015 here, too. Or how about the $6.2 billion a year that the Pentagon is projected to spend on the training of Afghan forces from 2012 through 2016? Or what about the Pentagon contract TomDispatch’s Nick Turse dug up that was awarded to private contractor SOS International primarily for translators with an estimated completion date of September 2014? Or how about the gigantic embassy-cum-command-center-cum-citadel (modeled on the U.S. embassy in Baghdad, now the largest in the world) which the Obama administration has decided to build in Islamabad, Pakistan? And let’s not leave out the Army’s incessant planning for the distant future embodied in a recently published report, “Operating Concept, 2016-2028,” overseen by Brigadier General H.R. McMaster, a senior advisor to Gen. David Petraeus. It opts to ditch “Buck Rogers” visions of futuristic war, and instead to imagine counterinsurgency operations, grimly referred to as "wars of exhaustion," in one, two, many Afghanistans to the distant horizon.

So here’s one way to think about all this: like people bingeing on anything, the present Pentagon and military cast of characters can’t stop themselves. They really can’t. The thought that in Afghanistan or anywhere else they might have to go on a diet, as sooner or later they will, is deeply unnerving. Forever war is in their blood, so much so that they’re ready to face down the commander-in-chief, if necessary, to make it continue. This is really the definition of an addiction -- not to victory, but to the state of war itself. Don’t expect them to discipline themselves.

By Tom Engelhardt, co-founder of the American Empire Project, runs the Nation Institute's TomDispatch.com. His latest book, The American Way of War: How Bush’s Wars Became Obama’s (Haymarket Books), has recently been published.
Posted by Kerry B. Collison at 3:31 PM

Email ThisBlogThis!Share to TwitterShare to FacebookShare to Pinterest
Labels: Afghanistan The Forever War: 2016 and Then Some