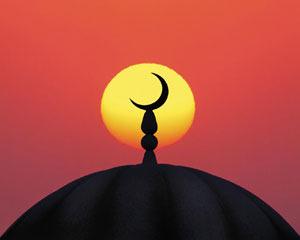 The creation of an Islamic state in Indonesia is not only being pursued by radical groups who will resort to anything, including terrorism, to achieve their goals.

Several political parties and organizations, whether outwardly or clandestinely, are vying for the same goal, though most go about it in a democratic way, like contesting the general elections, or preaching at mosques and in other open forums.
Those groups resorting to violence and terrorism should clearly be banned, but the others have legitimate claims in a country that takes pride in its democracy and guarantees of freedom of speech.

As long as they do not break any law, these groups with Islamic agendas have equal rights like other individuals and organizations in fighting for their beliefs, even if we don’t share them or even feel threatened by them.

President Susilo Bambang Yudhoyono however could have gone further in making his position on the issue clearer, instead of only condemning the radical groups. On Monday, he said a terrorist group recently busted by the police was preparing an attack on Independence Day celebrations in August, targeting Indonesian and foreign dignitaries.

While he firmly condemned the violent means the group uses (it has set up a military training camp in Aceh), he was not as forthcoming when it comes to rejecting their stated goal, which is an Islamic state.

It is this kind of ambivalence on the part of our national leaders that encouraged the perpetual debate on an issue that was actually settled by our founding fathers at the inception of this republic 65 years ago.

Then, the framers of the 1945 Constitution clearly rejected the idea of an Islamic state or the use of the sharia law for Muslims and a secular legal system for non-Muslims. They knew that they would never have gotten support from areas where non-Muslims are the majority like in Bali, East Nusa Tenggara and Maluku if Indonesia had declared itself an Islamic state. Though Muslims make up nearly 90 percent of the population, they agreed that Indonesia belonged to all religions, hence the Constitution guarantees freedom of religion and everyone’s right to practice their faith.

As a nation, we have since gone through more fierce debates on the subject, at one time erupting into an armed rebellion and lately falling victim of terrorist attacks. The issue resurfaced during the debate on the constitutional amendment in 2002, and again, the proponents of the Islamic state and sharia were soundly defeated by democratic process. As further evidence of the lack of grassroots support for their cause, the Islamic political parties together never polled more than 20 percent of the votes in the democratic elections Indonesia held in 1999, 2004 and 2009.

We are all for a healthy and democratic debate, but shouldn’t we draw the line before we say enough is enough, and that the nation should move on to address more important issues like poverty, job creation, education, health and the economy? Are we going to be held hostage by this issue forever, even when the opinion of the majority of the population, including most Muslims, are as clear cut as the election results show?

We certainly could do with a little more statesmanship from Islamic politicians by refraining from exploiting religion for short term gains and start channeling their energy and resources more productively toward nation building.
More importantly, we could do with a more assertive President to take the initiative in ending this tiring debate once and for all. Show some leadership for once, and end this ambivalence. Indonesia needs to move on.
The Jakarta Post Editorial
Posted by Kerry B. Collison at 3:29 PM